An expanded version of my Indian Comics Irregular essay Terrorism:  US Against Them:

The slaughter of innocent Americans was horrible, reprehensible, and unforgivable. But my comic book is called PEACE PARTY, not WAR PARTY, for a reason. I'm as committed to giving peace a chance as others are to violence and hate.

Read on for some thoughts on what we should and shouldn't do in response to the terrible death toll.

The call for annihilation
In the wake of the 9/11 holocaust in New York City, I received the following e-mail:

What? Why stop with just annihilating a few million innocent people? Why not destroy the whole continent? Perhaps the whole hemisphere? Maybe if we killed every human being who isn't an American, we'd finally be safe. 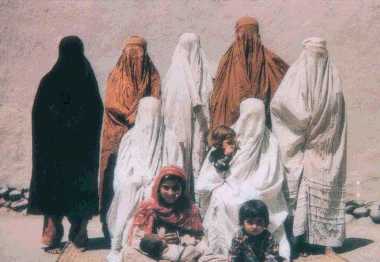 Of course, it would be ironic if this attack, like the Oklahoma City bombing, turned out to be the work of America's freedom-loving "patriots." Then we'd have to annihilate ourselves. Ooops.

Clark and others seem ready to condemn the world's 1.3 billion Moslems. Or maybe they'd just like to throw one-fifth of the world's population into concentration camps until we have time to sort them out. We're not doing anything with Alaska now; maybe they'll all fit in there.

Exactly how many of these 1.3 billion people does Clark think conspired to harm the US? A million? Ten million? A hundred million? Give us a number or spare us the stupid stereotypes.

Once again people are advocating genocide as a national policy. Once again we're threatening to scourge the world of people who are savage and inhuman. If you're Native American and have heard this one before, please raise your hand.

Can there be a better example of how stereotyping people replaces nuanced understanding with knee-jerk reactions? I doubt it. 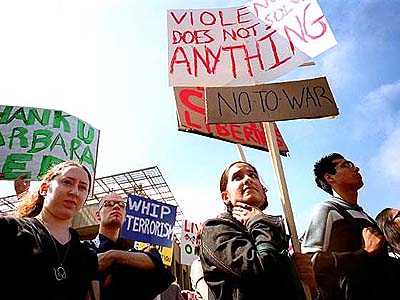 The horrific attacks are bringing forth racist and violent impulses from the depths of the American psyche. Not just against the terrorists who killed thousands, but against all who question the US, all Muslims, even all who aren't white or Christian. This willingness to hate the "other" is the true source of humanity's "evil."

The many aspects of terrorism
The terrorist attacks on America may be the biggest event in multicultural history since the civil rights movement and the Vietnam War. These attacks are precisely why PEACE PARTY and Blue Corn Comics exist. They present a challenge and an opportunity to America—but not the simplistic opportunity to "rid the world of evil."

When I first conceived PEACE PARTY, I described my theme as "whether a Native philosophy of peace and harmony is valid in this age of just wars and trickle-down economics." That still sums it up. The question is whether we'll continue our myopic, narrowminded ways or learn to understand our allies and enemies.

Here's what the 9/11/01 holocaust reveals about our cultural mindset:

And what the "war on terrorism" and its aftermath reveals:

Readers respond—on terror
"So, 1,600 dead Americans vs. 1,907 people worldwide killed by terrorists. Hmmmm, who's the greater evil here: Bush or the terrorists?"
"Where were these 'outraged' Arabs when 19 Muslims blew up the World Trade Center and the Pentagon on 9/11/01?"
"It is exactly your position on the right to keep and bear arms that allowed 9/11/01 to occur."
"[I]t sickens me to my stomach of how people such as yourself are convinced that Americans deserved the deadly terrorist attacks."
"In 100 years historians will deem 9/11 the most overblown and overrated event in American history."
"God knew the horror that was to come to our nation September 11th and had George Bush elected president."
Haddock:  "Our people are stunned at the idea that we are not universally loved."
Morford:  "It really is possible to love your country...and still believe the government is full of fools and prevaricators...."
North:  Muslim fundamentalists hate us because they "know what the scripture tells us...."
Vietnam veteran:  "Don't even go there with that kind of anti American crap."
"If you don't read every single word of this story, then the terrorists have won."
"The problem is that our very existence threatens them. No Palestinian state, destruction of Israel, etc. would satisfy them."
"I sure wish we'd stop 'declaring war' on entire concepts (drugs, poverty, etc.)."
Kelly:  Pacifists think "it is better to allow more Americans...to be murdered than to capture or kill the murderers."
Tracinski:  Francis Scott Key "saw the death of the enemy as proof of justice."
Are you suggesting we shouldn't get involved in any military conflicts?
Sullivan:  "Forced to choose between the West and the Taliban, the hard left simply cannot decide."
How to fight terrorism:  Urge readers to continue doing "exactly what they were doing before."
Kuhner:  Clinton is suggesting a moral equivalence between our founding fathers and Osama bin Laden.
Chomsky:  The New War Against Terror
Rushdie:  To excuse such an atrocity by blaming U.S. government policies is to deny the basic idea of all morality...."
Thobani rebuttal:  "Unity based on accident of birth, gender, blood, race, are pagan Eastern ideals."
What Bush should've said:  "We are going to change the policies that need to be changed...."
"Pilger:  "Once you cluster bomb, 'mistakes' and 'blunders' are a pretence. Murder is murder...."
"Our...state of denial about terrorism was one facet of the United States' entrenched provincialism as a culture."
"I can think of no negotiation with these people other than to tell them that they must give up the criminals they harbor...."
Wise:  "You can call your war just, and the rest of us naive, but that won't make it so."
O'Reilly:  "Who cares why the terrorists did what they did? Who cares why some people hate America?"
"What astounds me is how many don't see it, partly because they really don't give it a thought or care."
"You don't know. You never will. You are a coward. Yep. I'm starting to hate you again."
Barnett:  "The general militia...successfully prevented Flight 93 from reaching its intended target...."
Brown:  "This will be total war...with conventional, chemical, biological, and nuclear weapons being used."
Balzar:  "Rob of Culver City said I could not defend America's ideals and rethink them at the same time."
"We veterans know...it is not about justice but about defending the interests of the U.S. empire at any cost."
Peikoff:  "We must...destroy all branches of the Iranian and Afghani governments, regardless of the suffering and death...."
Herschensohn:  We don't need proof to wipe terrorists off the map.
National Post:  When people say the US "had it coming," they mean "murder is a morally appropriate rejoinder."
Bennett:  "We must begin to...believe that some actions are good and some evil."
Grossman:  "For the peace community to call for 'restraint' is to wave a red flag in the charging bull's face."
Vanas:  "I don't associate with people that...spit on the memory of all the people, Native American included...."
"You hate our values, our government, our religion and the majority of our people, near as I can tell."
Pitts:  "You monster. You beast. You unspeakable bastard."
Churchill:  The terrorists "have given Americans a tiny dose of their own medicine."
Kesler:  Our enemies concluded "America was a technological colossus but a moral midget."
Palast:  "Grieving Americans don't need nasty admonitions about the causes, just or unjust, of our killers."
Salon letter:  "Leftist terrorist apologistas continue to embarrass America."
Dan Rather on Letterman "could not tell us why this war he asks for is necessary."
Brownstein:  "This struggle against fanatical terrorism may be more like the Cold War...."
We lost Vietnam "because we never understood the people [with] a grevience against us."
Yeagley:  "Any person or country purposely contributing to terrorism must face extinction."
"I think the people to blame are the Iranian hardliners."
Sinclair editorial:  Americans are "the most generous and possibly the least appreciated people...."
"How long did it take you to come to the conclusion this was GW's fault?"
Longo:  "I will...take back the word 'annihilate', this was anger speaking...."