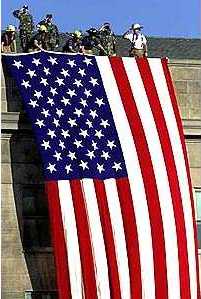 "Patriots" terrorize Americans
Why fear patriots as C. Cushing-Murray does? Why cringe as they come crawling out of the woodwork? Here's why:

From Boondocks Speaks: An Interview with Aaron McGruder on AlterNet, 11/5/01—a report that Boondocks was censored for criticizing Bush.

From An Organization on the Lookout for Patriotic Incorrectness in the NY Times, 11/24/01:

Comment:  Apparently, America's patriots are full of hot air. They talk a good game, and are more than willing to confront dissidents and minorities at home. But when it comes to putting anything on the line other than their mouths, they're nowhere to be found.

You bet the World War II image doesn't apply. This threat is several orders of magnitude less than Hitler's threat to world peace. Americans may cry for war from their comfortable reclining chairs, but they aren't willing to sacrifice their lives, money, or anything else for the cause. Perhaps they instinctively realize a handful of terrorists requires a limited police action, not an all-out war.

Patriotism in our schools:  "Drop the bomb"
Bush preps children to be next generation of killers:

Fortunately, not all Americans are children followed the Pied Piper, lemmings plunging over a cliff, etc. See Patriotism Means Asking Questions for more on the subject.

Native American patriotism
The following expresses the real meaning of patriotism. From the NY Times: