A lot of Americans must be reconnecting with their parents and grandparents these days. How else to explain why they're citing the 65-year-old case of Neville "Peace in our time" Chamberlain to justify their war against Afghanistan? I suppose they haven't cracked a history book since then, because that almost qualifies as ancient history.

Is that the best today's warmongers can do? Let's consider some more recent examples than grandpappy's war:

In every one of these examples, violence didn't end the conflict. True, not every conflict was resolved, but if something did resolve the conflict, it was diplomacy. Defined broadly, that includes negotiations, pressure, protests, boycotts, even threats—but not lethal violence.

Remember a policy called detente? It worked for a couple of decades, keeping tempers cool and the world from destroying itself. We didn't go to war with the USSR or China, although they sponsored far more terrorism than the Taliban ever did. Our leaders knew war against an "evil empire" would've been stupid and counterproductive—not to mention fatal.

Since Vietnam, the only wars even partly justified have been those against Saddam Hussein and Slobodan Milosevic. Both conflicts were preceded by months or years of diplomacy that ultimately failed. Hence the need, finally, to take military action.

In contrast, if we ever undertook a major diplomatic initiative to capture Osama Bin Laden, curtail the Taliban's influence, and engage the world's Muslims with confidence-building measures, I must've missed it. And 26 days of calling for crusades and other examples of saber-rattling doesn't count as diplomacy.

If you think about it, it's pretty simple. If known killers hole up in a refuge, do you bomb them to death? Do you risk "collateral damage" (i.e., dead bystanders) as your first and only option? No, you surround their hideaway, wait them out, and negotiate their surrender. In most cases, they comply.

That's how the police, our peace officers, operate against criminals. They pursue, surround, and negotiate—without firing a shot, if possible. Police and FBI crimefighting records show how well these tactics work. Authorities keep using them because they keep producing results.

The terrorist case is much larger in scale but no different in concept. Anyone who wanted justice would've sought justice the civilized way—through talk and pressure. Those who wanted revenge went in with rockets blazing, like Biblical barbarians seeking an eye for an eye.

Has war produced any results as of November? Has Bin Laden or the Taliban come begging for mercy? Of course not. Thousands of pundits predicted violence would only strengthen our opponents' resolve and weaken our allies' resolve. And so it has. Score one for America's pundits, if not for America.

When warmongers talk about "appeasement," what they mean is diplomacy, or anything other than bloodletting. President Bush read the polls and saw people wanted bodies. A calculating politician rather than a courageous leader, he gave them what they wanted.

Too bad, because diplomacy has worked many times over the years. Those who deny its efficacy are denying cold reality. They've doomed themselves and the rest of us to repeat history's mistakes.

Peaceniks on the fringe?
In their unholy desire to kill people, many warmongers have tried to demonize or marginalize peace activists. For instance, LA Times columnist John Balzar did so in his 11/4/01 column. Some responses from the LA Times, 11/7/01: 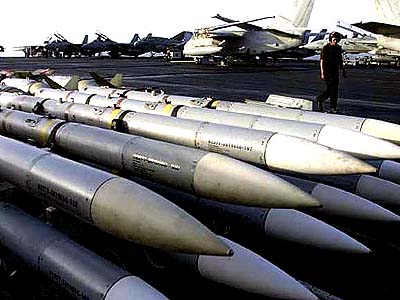 In "The Looming Fights That Unity Conceals" (LA Times, 11/4/01), Eric Cohen claims 9/11 has divided America into four "political constituencies." Three of the groups favor military strikes against Afghan citizens; only their enthusiasm for death-dealing varies. That includes the most far-thinking group, "cautious internationalists," in which Cohen absurdly places George W. Bush.

Here's how Cohen describes his fourth group, which includes anyone who doesn't want to bomb the bejeezus out of Afghanistan:

Thankfully, at least one reader disputed this nonsense. From the letters to the LA Times, 11/10/01:

Actually, Bush's method of restoring honor and dignity to the White House includes getting in bed with Enron lobbyists while family members continue his pattern of having run-ins with the law. But that's another story.

For a similar attempt to marginalize peace activists, see Dave Grossman's response to 9/11. For more on Balzar's muddled thinking, see his argument for questioning America's values while standing united as one.

>> Sorry, I don't understand your question. I don't think I've engaged in the they're-cowards-and-we're not name-calling. <<

In that letter, I was just sharing a general thought with you and the LA Times, not accusing you of anything.

>> So, I wonder if I was right this morning in my published reply by saying that people are making this an all-or-nothing matter? <<

>> As I recall there was almost a month's worth of diplomacy and warning before the military was called to action. <<

Twenty-six days isn't much of a negotiating period, especially when we put a gun to the Taliban's head. Moreover, Condoleezza Rice made it clear we were going to war regardless of the negotiations' outcome. That makes the so-called negotiations a sham.

>> Lastly, Rob I wish I could agree with you about walking away — I really do. I've read two or three pieces on the subject that seem fanciful to me. <<

When I wrote "it takes more courage to turn the other cheek, avoid a fight, walk away," I wasn't suggesting all three are equivalent or that we should do all three in response to 9/11. I was suggesting Bush is a lousy Christian—incapable of understanding a philosophical message such as Jesus's command to love one's enemies.

Turning the other cheek, or making war the last option rather than the first, doesn't necessarily mean walking away. Jesus didn't walk away from being slapped on the cheek. He stood his ground for what he believed in. He fought with his convictions, not with his fists.

>> Ie, put bin Laden before the World Court. Maybe you ought to write one and submit it to the latimes —oped@latimes.com. <<

The Times covered several trial scenarios in its Column One on 10/26. These scenarios seemed more fruitful than the idea of trying Bin Laden in a secret military tribunal. Even more than killing Bin Laden, that would be the best way to make him a martyr in the fight against Western imperialism. What better proof would the world need that justice is only for Americans?

How do we get to a safe world?
>> How do we get from WTC and anthrax to (whatever else they are cooking up: nukes?) to a world where it's safe to raise our children? <<

I predicted the anthrax scare would prove to be a homegrown attack, and I'm sticking with that prediction. As for nukes, the 9/11 attacks didn't increase the terrorists' access to them. Unless we have proof the terrorists have nukes and are storing them in Afghanistan, that's a straw-man argument for war.

Do you feel safer now that we've overthrown the Taliban government and killed one Al Qaeda commander? I don't. There's still a world of terrorists out there, planning attacks from their hideaways in Germany or the US or wherever. Increased security may deter them, but I doubt destroying Afghanistan will.

>> But it seems fair to ask: If we walked away, how could you see us living happily ever after? That's an important first-step in bringing upon change. << 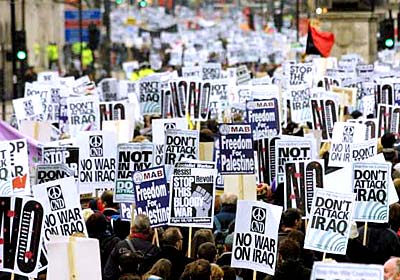 As I wrote in "Diplomacy Works, Violence Doesn't," warfare hasn't resolved that many conflicts since WW II. The Israeli-Palestinian conflict is the best example of the failure of bombing and killing to effect change. Do you think destroying Palestine as a legitimate entity would end the fighting once and for all?

Forceful engagement but not war caused the Soviet Empire to fall. Sanctions and boycotts brought about the end of apartheid in South Africa. Despite much IRA terrorism, Britain managed to negotiate a peaceful settlement without invading Northern Ireland. Why is this situation any different?

The only difference I see is that 3,000 Americans have died so we feel a crying need for revenge. Am I missing something, or is that pretty much it?

Here's a thought experiment you can try. If 3,000 Germans or Japanese (or pick another nationality) had died instead of 3,000 Americans, would our response have been the same? Would it have been even remotely similar? Would we risk American soldiers and Afghan civilians in an impossible drive to protect Germany or Japan, our staunch allies, from terrorist attacks?

My guess is that America's collective answer would be hell, no. If I'm right, it proves this war isn't about bringing Osama Bin Laden to "justice"—which apparently means killing him (in Dubya-speak). Or about ending the worldwide threat of terrorism—which was no worse a threat on 9/12 than it was on 9/10.

No, it's about killing "evildoers" because they killed us first. By blurring the distinction between Taliban and terrorist, we'll kill a bunch of towelheads (it doesn't matter whom), overthrow an un-American government or two, and secure some oil wells for Bush's buddies. We'll keep Americans blissfully ignorant by hiring Madison Ave. to spin the killing while censoring the press, curtailing civil rights, and executing the alleged terrorists in secret tribunals.

Is that your idea of a good war? It sure isn't mine.

See David Corn's "Why Bush Needs to Spin the War" in Dubya-Speak:  Justice Means Killing People for more on the subject.

Does war solve anything?
From Michael Medved and the Phantom Menace, in which Paul Harris rebuts Michael Medved's rebuttal of peaceniks who oppose war:

Yep, war sure does solve a lot of problems, doesn't it?

Even more so than Afghanistan, America's war on Iraq has proved the point. War can't do what diplomacy could've done. In In This Case, the Simple Solution of War Is Simply the Wrong One, Steve Lopez summarizes the truth of the situation. From the LA Times, 3/19/03:

Readers respond
Negotiations with Japan almost produced peace.
If someone comes at you with a knife, you have to respond with lethal violence—in self-defense.
"Were we obligated to undertake a major diplomatic initiative post Pearl Harbor?"
Case study:  Did bombing Germany work?