When I was a kid, my interests included dinosaurs, ancient civilizations (Egypt, Greek, Maya), mythology, unexplained phenomena (Loch Ness monster, Bermuda Triangle, UFOs), astronomy, science fiction, and comic books. A typical boy's interests, except maybe the ancient civilizations and mythology part. I believe there was a link between these disparate interests. Namely, they took me beyond the commonplace, the standard, the everyday perspective on life. They revealed how limited our existence was compared to what it could be.

To give some examples:

Although I had a Hopi/Zuni coloring book, made a "kachina" in summer school, and even drew a couple of pseudo-Indian super-costumes, I didn't have a strong interest in Native Americans. Like most people, I didn't know or think much about them. I imagined they were all pretty similar, with a vague belief in a "Great Spirit," slowly vanishing "out there" in the desert somewhere. 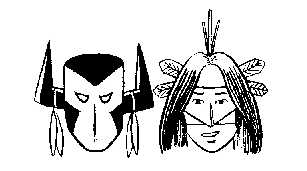 As I grew older, I became more interested in real-world political, social, and economic issues. They were infused with what I'd call a dawning multicultural perspective. This perspective was bolstered by lessons learned from history: that the Mongol empire controlled 2/3 of Eurasia for awhile, that Africa had its own civilizations (but couldn't compete geographically with Europe and Asia), that the American Indians were mostly decimated by disease, and so forth.

I also became more interested in real characters with real lives, thoughts, and emotions—not the superficial cardboard characters so prevalent in comics. If I ever wrote a comic, I wanted it to be like the best comics I had read—WATCHMEN, DARK KNIGHT RETURNS, SQUADRON SUPREME, CONCRETE, EL DIABLO, and more. Comics that combined larger-than-life heroism with a recognizable world that included race, religion, and politics.

Taking the plunge
Then, a decade ago, I was casting about for a comic book project to work on. I knew a bit more about Indians then, and I had an epiphany. The two heroes I'd drawn looked vaguely like Hopi kachinas. The Hopi were "the people of peace." I could take my two characters and make them Pueblo-based Indians. They'd embody a Native American perspective, or more broadly, a multicultural perspective. That would set my comic apart from most comics, where the predominant themes were "might makes right," "win at all costs," and "all hail the conquering hero."

As a freelance writer, I also could write articles or essays about the issues I studied. Native Americans and multiculturalism could be another area of specialization besides business and computers. My professional and creative interests could mingle to produce synergy.

Hence I began brainstorming the ideal comic for my plans...as detailed in the links below.