Wild guesses about the terrorists' motivations

Comment:  So the terrorists are attacking civilization, freedom, modernity, Christianity, or goodness. Or something like that. Whatever they were attacking, apparently we have it and they don't.

See what the experts have to say about the nonexpert opinions of Bush and Rather.

Rare is the book that can change the course of an international debate, but "Imperial Hubris: Why the West is Losing the War on Terror" is just such a book.

We are losing the war on terror? Yes, though that's the least of the bad news, says the author, a senior U.S. intelligence official who wishes to remain anonymous. We are losing, and we don't even see that we're losing.

"One of the greatest dangers for Americans in deciding how to confront the Islamist threat lies in continuing to believe -- at the urging of senior U.S. leaders -- that extremist Muslims hate and attack us for what we are and think, rather than for what we do," Anonymous writes. It's not U.S. values, but U.S. policies that are under attack.

What are these inflammatory U.S. policies? Bin Laden has told us many times, writes Anonymous, so here again are the six main ones:

We keep troops on the Arabian Peninsula.

We occupy Iraq and Afghanistan.

We support Russia, India and China in suppressing Muslim militants in their countries.

We support corrupt and tyrannical Muslim governments, such as the royal House of Saud.

We support Israel in policies that keep Palestinians in the Israelis' thrall.

Anonymous' analysis has one small comfort to it: If this is a war over policy, territory, influence and autonomy -- over power -- then it's a familiar beast, albeit in unfamiliar terrorist clothing.

But we have met politicians who dismiss bin Laden and al-Qaeda as crazies who hate us just because of who we are. The only possible response to crazies, after all, is to bomb them back to the Stone Age. 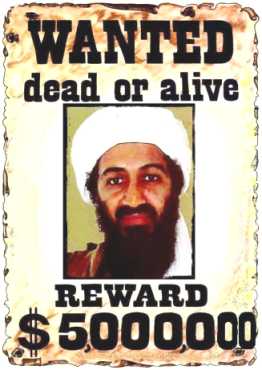 Demonizing the demon
What Bush and his ilk are trying to do is obvious: demonize Osama bin Laden so they can launch wars, enrich their cronies, and generally amass power. If someone is the devil incarnate, you don't have to understand what motivates him and, more importantly, his millions of followers.

Comment:  That Bin Laden failed at his goals doesn't alter the goals themselves. The highly-respected Economist concurs with the other analysts. Bush's talk of a threat to "freedom" or "civilization" has been so much propaganda for gullible Americans.

The evidence explicated
The Pape study above proves Islamic terrorists are sending a message in the worst way possible. But for those who still don't quite get it, I summarized the available evidence on what these terrorists seek. I sent the following letter to the LA Times on 12/7/01:

From the horse's orifice
But why speculate on Bin Laden's motivations when he's stated his aims many times? Here are some excerpts from his past writings and interviews. From the LA Times, 9/16/01:

Comment:  Although one might infer a threat against "freedom" and "democracy" in America, the main goal is to remove our influence in Islamic countries. Although our Islamic allies don't support this goal, they aren't hunky-dory with our military, economic, and cultural hegemony in the Middle East, either. If Bin Laden's goals and methods are wrong, we still need to address why he's much more popular than we are in the Islamic world.

Comment:  Bin Laden's latest words echo what he's said before. "...until you stop your oppression and aggression," "which came in response to some of your previous crimes," "we will respond in kind." If you read most of his comments, Bin Laden believes he's responding to US aggression and he'll fight until the aggression stops—not until the US is destroyed.

The evidence of Bin Laden's intentions is directly above. Bush's claims that he wants to destroy the US or freedom or democracy are a sham and a lie. Dubya wants to justify his endless war against anyone he doesn't like.

PARIS -- Three years after the Sept. 11 attacks forced the West to seek an overnight education in Islamic extremism, the myths endure.

The militants are impoverished and uneducated. Lifelong religious fervor drives them to embrace jihad. Al Qaeda aggressively recruits and brainwashes the men.

Those ideas are tempting but incorrect, argues Marc Sageman, a CIA veteran turned forensic psychiatrist. In a book based on 172 case studies of so-called holy warriors, Sageman concludes that social bonds are a more vital force than religion in molding extremists.

Mohamed Atta and his fellow hijackers were a classic example of this "bunch of guys" theory: educated, upwardly mobile but alienated immigrants who formed a tight-knit clique in Hamburg, Germany.

Powerful friendships drove their radicalization, Sageman says. In long talks about Islam, their love for one another mixed with hate for the West, propelling them finally into Al Qaeda.

"It's a group phenomenon. To search for individual characteristics in order to understand them is totally misleading. It will lead you to a dead end."

Sageman came to Paris last month to discuss his book, "Understanding Terror Networks," with scholars and law enforcement officials who are among the West's foremost experts on radical Islam.

His work has struck a chord here because it searches for scientific answers to questions that haunt the world with each new act of bloodshed: Why? Who are the terrorists? What makes them kill?

Like many European investigators, Sageman emphasizes the fluid, spontaneous nature of the global jihad and Osama bin Laden's hands-off leadership, based largely on providing money and inspiration.

The Al Qaeda network has not engaged in active recruitment or "mind control," he argues. Instead, extremist cliques made up of friends and relatives seek out "brokers," usually veteran jihadis who can channel them to training camps and other gateways to the network, he says.

"Joining the jihad is more akin to the process of applying to a selective college," Sageman writes. "Many try to get in, but only a few succeed, and the college's role is evaluation and selection rather than marketing." His theses have been disputed.

In 2002, the Dutch intelligence service found that Al Qaeda had "explicitly instructed" recruiters to base themselves in Europe and troll for aspiring jihadis in prisons, mosques and other gathering places. Recruiters used psychological techniques such as isolating recruits and assigning them a "buddy" to serve as a continuous influence, according to a report by the intelligence service.

Some excerpts from Some People Push Back:  On the Justice of Roosting Chickens by Ward Churchill:

More on what the terrorists want

From a book review of The Road to Martyrs' Square: A Journey Into the World of the Suicide Bomber. In the LA Times, 1/30/05:

From "Beneath Bombast and Bombs, a Caldron of Humiliation" by Jessica Stern. In the LA Times, 6/6/04:

More on what the terrorists want
"Radicals seek to drive home the point that Americans should never contemplate...visiting American military force against the Muslim world ever again."