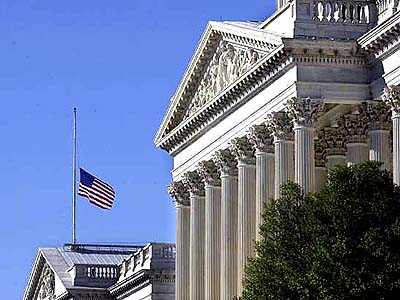 Sounds like the defense experts are urging us to take a multicultural perspective. To understand our enemies and the wisdom of those who have gone before us—especially our honored Native warriors. Sounds like these experts and I are reading from the same (PEACE PARTY) script.

Will war weaken us?
From "Can the Economy Survive the Attacks?" by Kevin Phillips. In the LA Times, 9/16/01:

How will the terrorists respond?
From Some People Push Back:  On the Justice of Roosting Chickens by Ward Churchill:

It's a safe bet they'll be his only targets. Bush can't define "terrorism" in such a way that excludes "freedom fighters" and others with legitimate grievances and aims. Look for him to declare "victory" and bring the troops home after he does whatever he's planning in Afghanistan.

Previous "wars" against terrorism
From "Glorious Death: The Kamikaze Impulse" by Robert Fisk. In the LA Times, 9/16/01:

More terrorist supporters we won't attack
Two big supporters of terrorism are Pakistan, which provided logistical support for the Taliban regime, and Saudi Arabia, which provided financial support. Is the US planning to attack Pakistan or Saudi Arabia? To use cross words against them? No, of course not. These terrorist supporters are our allies in the "war" against terrorism, which shows how ridiculous Bush's proclamations are.

I helpfully tried to make our hypocrisy clearer in some letters to the LA Times:

World war against terrorism? Ain't gonna happen
The worldwide "war" against terrorism will be an exercise in futility because there's no legitimate way to distinguish between terrorists and "freedom fighters." People don't go to war because they're mad or suicidal, they do so because of real or perceived grievances.

A closer look at one so-called terrorist organization. From the LA Times, 10/4/01:

From Destined to Shadowbox with the Devil by Robert Scheer. In the LA Times, 9/18/01: