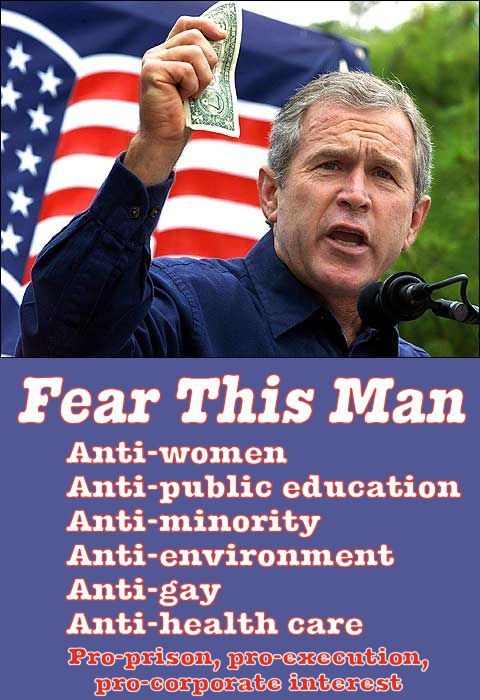 As if calling for war against a criminal and his henchmen weren't enough, Bush ratcheted up his rhetoric to new heights. From the LA Times, 9/18/01:

Comment:  The moment may not be subtle, but the problem facing America is. But Bush isn't a subtle thinker—or a thinker, period—so that may explain his choice of words.

Bush's "task" at the moment isn't to be a politician and put his policies beyond criticism. His task is to be a leader or a statesman. If he wants to "calculate" his words to further his agenda, I'll be happy to calculate mine when his agenda fails. And it surely will fail since, as William Epps said, you can't eradicate evil.

Okay, I'll bite on that one. If you look up "evil" in the dictionary, you should see a picture of the Holocaust next to it. If killing 3,000 people in a holy war is "evil," how would Schama describe a genocidal purge 1,500 times more deadly? "Really, really, really, really evil?"

"Evil is any abstraction that enables you to look at someone and not see the person," said Lee Thorn in "Reconciliation" (Turning Wheel magazine, Fall 2000). In other words, it's a way to demonize a person into an object, which you can then dispose of like a crushed soda can.

Now Schama is getting warmer. If the situation is far more complicated than "good vs. evil," perhaps he should find a better word than "evil" to describe the terrorists. Sounds like he's agreeing with Margaret Drabble that the word is unhelpful. 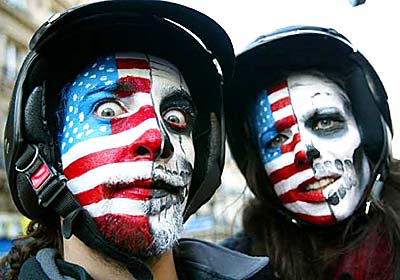 Only the first goal is arguably evil, because it imposes on others that which they don't want. If Islamic fundamentalists believe they're in a legitimate war, their goals (if not their methods) become legitimate also. America killed a lot more innocent people at Hiroshima, Nagasaki, and Dresden, so motive is everything.

William J. Bennett, self-proclaimed morality czar, is another who has claimed the terrorists are uniquely evil. I've posted his arguments and, as always, refuted them.

Bush finds more "evil"
When Bush couldn't immediately locate Osama bin Laden, he needed some justification to continue his perpetual war state. Hence he labeled Iran, Iraq, and North Korea—three unrelated countries—as the "axis of evil." His rhetoric was as ill-advised this time as it was before. 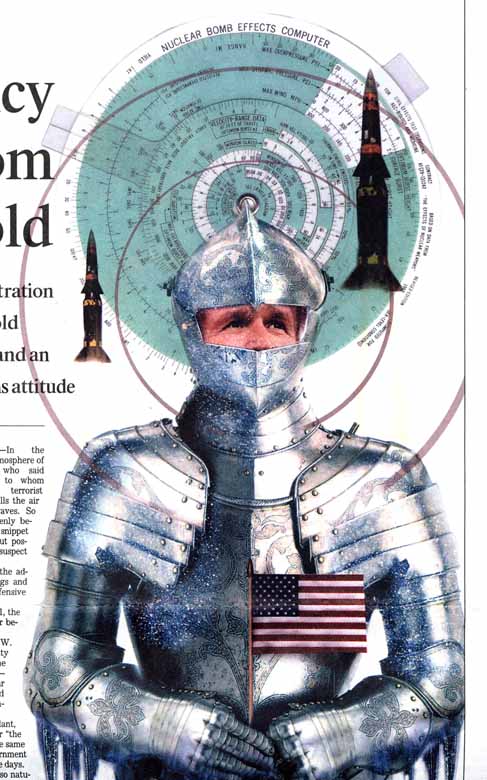 Why "evil" talk is dangerous
From Nazis to terrorists, our enemies are always "evil." From the LA Times, 12/4/01:

Summing it up, "ignorance is bliss" for many Americans. The attitude is central to the cowboy mentality of Reagan, Bush, and anyone else who thinks the world is black and white. 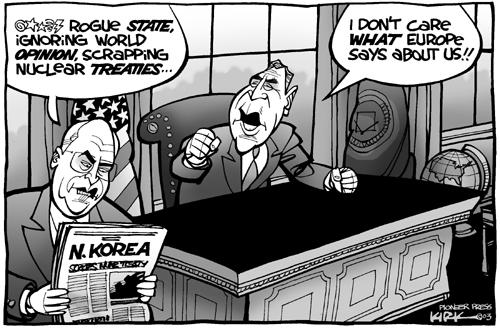 More on ridding the world of "evil"
Americans are from Mars, Europeans are from Venus:  "Americans generally split the world into good and evil, friends and enemies."
How the World Sees Americans:  "[T]he world's superpower...has a childlike understanding of everybody else."