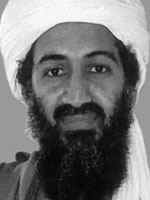 Like the Taliban, Al Qaeda sprang from the "freedom fighters" recruited by the US to fight the Soviet-backed Afghan regime. From "First, Know the Enemy, Then Act" by Dale F. Eickelman. In the LA Times, 12/9/01:

Comment:  How typically American it is to do something immoral or ill-considered and then suffer "blowback." The US destroyed Native American cultures...so now Indians suffer poverty, alcoholism, and suicide rates well above the norm. The Founding Fathers wrote slavery into the Constitution...so the nation fought a bloody Civil War to end the institution it started. The European powers imposed the Treaty of Versailles on Germany...so Hitler led a World War to restore Aryan pride and dignity.

Why the Soviets invaded Afghanistan
An excerpt from "Their Evilness Wasn't Outside History" by Alexander Cockburn. In the LA Times, 9/30/01:

Sponsoring terrorism a US habit?
From filmmaker Michael Moore, 9/12/01:

As for singing "God Bless America," terrorists from right-wing militias to Islamic fundamentalists have sought God's blessings. Most terrorists invoke him to justify their massacres. That suggests how foolish it is to claim God on "our" side.

Looks to me like Allah and Mohammed are kicking the butts of God and Jesus, the "Greatest Warrior of Them All," so far. If Bush doesn't win his "war" against terrorism, I guess Jesus's new title will be Greatest Loser of Them All. If you believe Jesus is a good American, that is.

More on US support for terrorists

Osama Bin Laden and Saddam Hussein: our two guys
Just as Ronald Reagan bolstered Osama Bin Laden's cause, he also bolstered Saddam Hussein's cause. Did Ronnie ever meet a dictator, thug, or terrorist he didn't like? If so, it isn't obvious. And how ironic is it that Donald Rumsfeld now reviles his negotiating partner Saddam?

From The Wraps Come Off Bush's Colonialist Agenda by Robert Scheer. In the LA Times, 3/25/03: 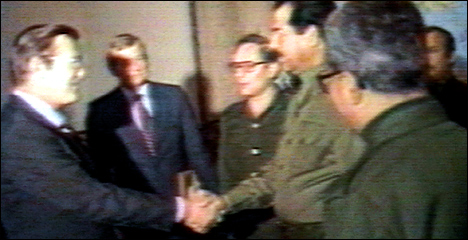 More details on our complicity in Iraq. From How the US armed Saddam. In the Sunday Herald, 2/23/03: