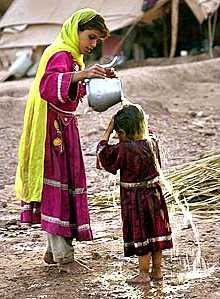 Rumblings of discontent
In November, people began to realize this war had little or nothing to do with its stated objectives: bringing terrorists to justice. Some quotes on the subject:

See also the responses to Terrorism:  "Good" vs. "Evil"óespecially #39 and up, which I posted after the fall of Kabul. That was the beginning of the end of the war. From that point on we can begin assessing whether the results were worth killing Afghanistan's people and destroying its infrastructure.

Tallying the results
In late November and December, the results from the Bush-censored "war" began coming in. From Professor Marc Herold's research as reported by Democracy Now!, 12/10/01:

Subsequent reports have said this death toll may be exaggerated. But since these analyses tend to discount "unverified" reports, we'll probably never know the true death toll.

Next, a report on what the public really thinks about the war. From the Stirling Media Research Institute, 11/21/01:

See the rest of this article for an excellent analysis of how polls misrepresent the support for diplomatic rather than military solutions to the conflict.

Bush begins the real battle
After taking out the Taliban government, which wasn't what Bush promised us, he finally got around to fighting terrorism, which was. He finally began following the recommendations of countless peace activists, who were intelligent enough to understand you can't fight a conventional "war" against an anonymous global enemy. If only this cowboy doofus had an ounce of gray matter in his Stetson, we might not have killed a few thousand Afghan civilians while overthrowing the Taliban.

Bush-war fails as terrorism thrives
Months later, the evidence is in. The war on Afghanistan did nothing to end the threat of Osama bin Laden, Al Qaeda, or worldwide terrorism. Repeat: Nothing. We overthrew the Taliban government, which wasn't our goal, but didn't bring terrorism to heal, which was. Our Bush-league "president" is either a liar or an incompetent for failing to do what he said he'd do.

CIA Director George Tenet agreed that war has failed to halt or even curtail terrorism. From the LA Times, 10/18/02:

Comment:  We "disrupted" Al Qaeda in Afghanistan? The dangers have "shifted"? Is that the most anyone can say?

Al Qaeda disrupted the USA much worse on 9/11. We're spending billions on protecting airports, almost nothing on safeguarding other targets. We're reducing our nation's civil rights, not increasing the world's human rights. We're doing everything to destroy Saddam Hussein, almost nothing to snare Osama Bin Laden.

In terms of disruption and shifting dangers, one could argue the terrorists are winning the war, not losing it.

Pentagon admits US is failing
From the Sunday Herald, 12/5/04:

My two cents' worth
In response to an article, I wrote the following letter to the LA Times, 2/10/03:

Who's responsble for further deaths?
I wrote the following letter to the LA Times, 11/20/02:

More evidence of war's failure
"[T]he government's top terrorism center concluded that there were more terrorist attacks in 2004 than in any year since 1985...." (4/15/05)
"Al Qaeda and its allies are winning because we remain mired in old ways of thinking about fighting an enemy" (7/18/04)
"[T]he U.S. battlefield victory in Afghanistan did not destroy Al Qaeda and the Taliban but drove them underground" (1/1/04)
"War in Iraq has swollen the ranks of al-Qaida and 'galvanised its will' by increasing radical passions among Muslims" (10/20/03)