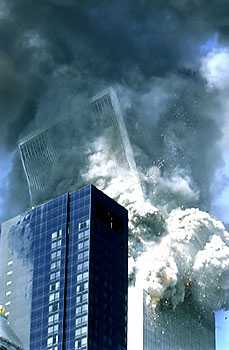 The waiting game
Once the initial shock was over, the rest of the war began. The first phase was waiting for the Bush administration to move its chess pieces into position while pretending to seek a nonviolent solution to the crisis. The following is a log of miscellaneous comments from me and others charting the war's course:

Initial reactions to the "war," phase two
On Sunday, October 7, 2001, "President" Bush launched his undeclared war against Osama Bin Laden, Al Qaeda, the Taliban, terrorists, evildoers, enemies of freedom and democracy, and the US Constitution. The commentary continues:

More comments on the "war"

Like Bill Bennett, you must believe it's better to have hypocritical morals than no morals at all. Because your positions reek with hypocrisy.

>> Make sure your congressmen know that we are very willing to fight the war, but our liberties must stand in memorial to the victims. <<

Something like 2/3 of Americans favor curtailing our civil rights, including the media's right of access to the war. I suspect our soldiers, police officers, firefighters, and rescue workers would vote to limit our freedom in even greater numbers. They may defend our lives, but the people who protest do more to defend our liberty.

>> Afghanistan has a clear choice — give up bin Laden to US jurisdiction (or the jurisdiction of a UN tribunal) or face retaliation. <<

That's exactly what Afghanistan did not have: a clear choice. Bush refused to "negotiate" (i.e., say) whom the Taliban was supposed to turn Bin Laden over to. He also pretty much ruled out turning Bin Laden over to a third party such as the UN.

Most "civilized" countries won't extradite criminals to the US when the criminals might face the death penalty, and this is no different. Since Bush refused to "negotiate" the conditions of Bin Laden's surrender, it's not surprising the Taliban refused to consign him to an unknown fate. Especially since Bush made clear, in word and deed, that he was going to attack the Taliban no matter what they did.

Clear? Clear as mud, maybe. From declaring a general war against terrorism to targeting Bin Laden and Al Qaeda specifically, Bush has been anything but clear. I wouldn't take his crusade-threatening, flip-flopping rhetoric seriously either if I were his opponent.

Maybe God was on vacation that year.

>> If Falwell and Robertson think what happened is punishment from who they worship, it's not God these guys are worshiping. <<

God is all things to all people. That's the problem with God.

God bless Afghanistan, Albania, Algeria, America, and the rest of the world.

I strongly object to your publishing silly letters like Jerome Greenblatt's. He says we're fighting to defend what's "right" and that requires censorship. If the Bill of Rights isn't right enough for Greenblatt, maybe he should move to Afghanistan, where no free press exists to expose the foibles of war. Or the foibles of Greenblatt.

Re "Monsters of the Imagination," editorial, Oct. 21: "But on Sept. 11 we saw in disbelief, live on TV, more sudden death than on any other day in American history." What about Hiroshima and Nagasaki? Oh, I forgot. That's Japanese history.

>> Boeing is getting in line early for panic spending by the US Govt. <<

Most industries have gotten in the same line. So much for their belief in capitalism. They believe in making money but not losing it, clearly.

When it comes to losing money, they're socialists. Which makes them hypocrites as well.

I haven't taken a position on the not-uncommon claims that Bush* has pursued war against Afghanistan to secure Central Asia for US oil interests.

Personally, I don't think he's smart enough to manipulate world events like that. After all, this is the doofus who brays "tax cuts," "missile defense," and "Arctic drilling" as the one-size solutions that fit all. Doesn't matter whether we're in boom times or bust, at peace or at war, he's chanting his mantra. Pull his string and this plastic toy utters the same phrases over and over.

Clearly, this is someone who can't come up with complex plans or thoughts. He's stretched his brain to the limit by casting Bin Laden in comic-book terms—a la his Bible or Dr. Seuss books. If the terrorists had killed three or 30 instead of 3,000, Bush would still be talking about a crusade against evil.

This is the guy who can't pass an environmental regulation without supporting arsenic in the water. Who can't name a historic landmark without picking a Superfund site. I'm confident Bush* doesn't have a subtle, Machiavellian scheme to win the war for oil. Like Reagan, he simply isn't that intelligent.

Let it never be said I won't defend our "president" when he deserves it!

*Elected by the Supreme Court, not by the voters.

The idea that we may invade other countries to root out terrorism is one of the saddest jokes perpetuated on the American public. But I'm sure it's helping Bush's* ratings, which may explain why he perpetuates the joke. If he revealed how limited this war will have to be, even the warmongers would start to question his "leadership." That would doom Bush's* war faster than any terrorist response.

Remember, you read it here first.

*Not the legitimate president.

We've learned that West Germany harbored Bin Laden's terrorists for years. Perhaps not coincidentally, it also harbored Hitler's Nazis for years. The pattern is clear, so what are we for? Let's teach these terror-loving Germans a lesson!

>> Then again, so far, we haven't declared war on anybody specific, either. That's very likely to change soon, of course. <<

We don't need to declare a war to fight one. We can just drop bombs until everyone evil either dies or surrenders.

Not only is Bush reducing women and children to bloody pulp, he's even blown up some dogs. I hope they were "evil" dogs who got what they deserved.

>> But what if a passenger could have taken out a terrorist before he brought one of the plane home to roost into the WTC? <<

Who was stopping the passengers? Are you afraid of a guy with a box-cutter? Give me my briefcase and I'll take him on, especially if my life is in danger. A blanket over his head, a purse around his knife-arm, and he's down. Threat over.

>> Hearing these right-wingers on the radio makes me wonder just what we're fighting for as they think that anything besides kicking some already wasted Afghanistani ass is UNAMERICAN. <<

>> These kind of remarks go against every fiber of my being and are against what this country is supposedly based upon. <<

>> Any news on the Star Wars initiative to make the world safe or is that another obvious black hole to throw cash into? <<

Bush is pushing his missile defense system as much as ever. Ten thousand commentators have pointed out how useless it'll be against terrorist attacks.

Bring Osama bin Laden and his Al Qaeda terrorists to justice without going to war, if possible. Once Serbia ousted Milosevic from office, we didn't need the military to bring him to justice. And war didn't do anything to remove Saddam Hussein from office. War is an excellent tool for revenge, but a poor tool for justice.

So far we've pulped lots of Taliban soldiers—soldiers who were guilty of nothing more than loyalty to their government. Have we touched or even inconvenienced a single Taliban leader, Al Qaeda terrorist, or Osama bin Laden? What exactly is this war about: justice, or revenge?

>> We can get the terrorists without giving up our constitutional protections. <<

We can also give up our constitutional protections without getting the terrorists—as we seem to be doing now.

Apparently America has won the war on terrorism. Why else would Ashcroft take the time to prolong the suffering of terminally ill people? Oh yeah, I forgot. Like Osama bin Laden, Ashcroft is a religious fundamentalist.

John Balzar asks why Ashcroft chose now to try to cancel the results of Oregon's democratic vote for assisted suicide. I think he knows the answer to his question. Ashcroft is doing it because he can.

Bush came into office pushing an extremist agenda more divisive than anything since Newt Gingrich's Contract on America. Democrats and other patriotic Americans told Bush that his plans to give away America's riches to his fat-cat supporters were dead on arrival. Now, under cover of the war frenzy, this administration is resuming its attack on America.

Aided and abetted by the media, Bush has made it unpatriotic to question the government's actions. With papers like the Times and columnists like Balzar calling for us to stand united, Bush knows he'll never have a better chance to ram through his right-wing legislation. If America goes into debt paying off the Christian-capitalist minority who got him appointed president, well, who cares? We're at war, dammit. Bin Laden has nukes, so let's suspend judgment. Big Brother knows best.

Tax cuts that won't help the economy...oil drilling that won't reduce our energy dependence...a missile defense system that won't stop terrorism: they're baaaack. Add a reduction in civil rights, bailouts for job-cutting corporations, censorship of presidential papers, a renewed program to fund religious institutions, and now Ashcroft's onslaught against the doctor-patient relationship. If Bush gets a chance to further eviscerate environmental regulations, gun control laws, or the right to abortion, look for him to take it.

In short, if the terrorists hadn't offered Bush a target, he would've had to invent one. That's the only way he could've gotten Americans to unite with him, not against him.

While doing an exemplary job of extolling the virtues of stealth weaponry, the U.S. media have not proved as adept at informing the public about stealth policy, wherein our war against terrorism has cannily evolved into a war against the Taliban.

Bush is still talking about ridding the world of evil. As with his many other statements, people have learned to translate this. When he says "evil," he means "a small group of Afghan terrorists whom he considers evil," not "evil."

If anyone can explain these conundrums, please do.

The Taliban government falls
The next phase of the war involved mopping up the remaining Taliban and Al Qaeda fighters (most of them fled to fight another day), stabilizing the country, and setting the stage for a new government to emerge.