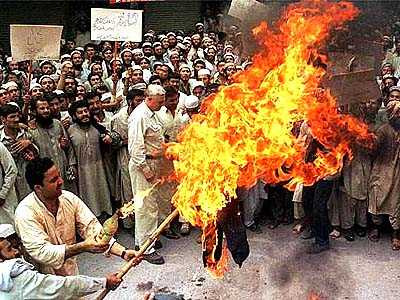 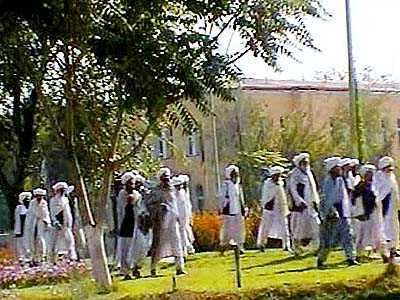 Do "they" dislike the West...or just America?
More points on the anti-Israeli sentiment:

Time for sense in the Middle East?

Did war stabilize the conflict or destabilize it?
From A Foul Wind by Thomas L. Friedman in the NY Times, 3/10/02:

Rob's comment
Wasn't it Osama Bin Laden's goal to cause the Islamic masses to rise? Isn't the latest intifada an example of that? Is the growing anger worldwide toward the US's support of Israel helping or harming our interests?

The answers are obvious. Score one for the terrorists.

More on the Israeli-Palestinian conflict
Israel Urged to Adopt Geneva Convention:  [P]roposal could cloud the government's contention that Jewish settlements in the West Bank and Gaza are legal.
'Palestine Is Everything' to the Arabs:  While the U.S. debates a war on Iraq, many in the Mideast remain focused mostly on the bloody conflict with Israelis.
Jews, Palestinians are genetically identical

The Indian-Palestinian connection
In his book Indians Are Us?, author Ward Churchill calls the American Indian Movement (AIM) "probably the preeminent native resistance group in the U.S. since 1970." He notes that "AIM and the Palestinian Liberation Organization (PLO) have long expressed a formal solidarity based in 'united resistance to a common form of oppression.'" In a footnote he adds: "During the 1982 Israeli assault upon Beirut, for instance, AIM leader Russell Means was widely quoted as stating that 'the Palestinians of North America offer sanctuary to the American Indians of the Middle East.'"

So activist Indians are well aware of the parallels between the American oppression of Indians and the Israeli oppression of Palestinians. They've been aware of it for decades.

More on the Indian-Palestinian connection
Good Fox:  Palestine:  Stop the re-creation of "Indian country" in the Holy Land
"[P]arallels between the ongoing genocide in Palestine, carried out by Israel with US support, and the genocide of Native Americans."
Palestinians = Navajos
Zionism, Manifest Destiny, and Nazism
Palestinians dress like faux Indians to protest Israeli oppression
"God Given Right":  Palestine and Native America
Israel Could Have Learned Much From Native Americans:  "Can the early Indian reservations be compared to refugee camps?"
What Indians and Palestinians Share:  "Palestinians in the Occupied Territories continue to experience the post-modern version of manifest destiny."
Camp:  "[T]he Israeli government is treating Palestinian people like America has historically treated Indians."
"Native Americans oppose any system of reservation...and can sympathize with the situation of the Palestinians."