Stereotypes about cultural traits
Joseph Riverwind wrote the following for this site:

Additional notes from Rob
Joseph limited himself to cultural stereotypes involving beliefs and practices. Our Hall of Shame combines the cultural and personal stereotypes—the stoic, drunk, or good-for-nothing Indian—in one comprehensive list. Each item provides a summary of the subject but is by no means comprehensive. One probably could write a book on each of these subjects.

One overriding stereotype is that all Indians were the same—that they all wore buckskins and feathers, lived in tipis, followed a great chief and his medicine man, danced and prayed to nature, etc. The Playmobil Indian Village set suggests the problem. It intermingles what looks like an Apache warrior, a Plains Chief, a Navajo weaver, and an Algonquin canoe.

Actually, these come from several separate, largely unrelated cultures. As the 500 Nations title suggests, thousands of different Indian cultures existed before Columbus arrived. They were as distinct as the European cultures of the British, the Spanish, the Vikings, the Russians, and the Greeks.

Stereotypes about personal traits
The following posting lists many of the traits associated with the Indian person. Many have corresponding pages on this site.

A study released 8/29/07 provides more data on these points:

More on the differences between groups
A shining city on a hill:  what Americans believe
Hercules vs. Coyote:  Native and Euro-American beliefs
Native vs. non-Native Americans:  a summary

In addition to the spiritual and ecological tropes, Indians often refer to themselves as warriors. That may explain why they support (or don't strongly oppose) the following categories of stereotypes:

Team names and mascots
Indians in the military
Indians as warriors 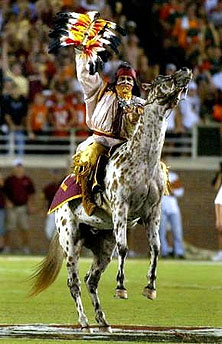 Chaat goes on to say how Indian artists in particular and Indians in general should resist thinking of themselves in stereotypical terms:

More on the basic Indian stereotypes
The secret to writing Indians
Every Indian lived in a teepee?