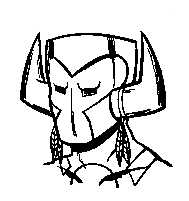 Are Native "spirits" (loosely defined) equivalent to angels? Or are they equivalent to saints? And does that make it okay to write about them?

As a gross generalization, I'd argue that Native spirits are more analogous to saints than to angels. Why? Several reasons:

1) Despite the New Agers and movie producers who believe otherwise, my reading of theology is that angels aren't flitting among us constantly. The Bible portrays them as messengers of God, beings who perform certain duties and then return to Heaven. They're remote and otherworldly, not part of everyday life.

In contrast, many Christians, especially Catholics, treat saints as if they're in the next room, ready to intercede on their behalf. Likewise with the Virgin Mary. I don't know if Christians consider her a saint, but she's in the same real-world category. She may appear at any moment to help the poor and downtrodden.

A Native spirit is also a real-world presence, not a remote figure. The spirits live in the water, in the plants, in the rocks—in every aspect of nature. Spirit beings may walk a village at night or appear nearby. To the people who believe in them, they're real.

3) Christians don't have rituals or artifacts associated with angels. They do with saints. Many saints have their own day with an associated parade, feast, or ceremony. Believers use medallions or other objects to draw upon their power.

The point of this? Angels (and demons, for that matter) are too abstract and unreal to be a central part of Christianity. That makes it more acceptable to fictionalize them and use them in comics. Nobody takes it personally if a writer invents an unorthodox or errant angel. After all, there are hosts of unknown angels.

In contrast, saints are human beings with real histories. Though they're nominally in Heaven like other souls, their power resides on earth. People believe in them here and now, fervently.

For that reason, you almost never see a fictional saint in comics. Or a real saint with fictional aspects. In fact, I can't think of a single example of a comic book saint. Can you?

Native spirits have the same properties as saints. Native people may consider them as human as you or me. Fictionalizing spirits is riskier than fictionalizing angels, and likely to be more offensive. Therefore, one should proceed with caution.