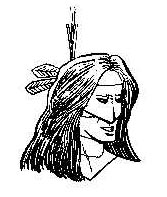 A discussion of the terminology used to describe Native religious leaders. After some preliminary remarks, someone explained why he used "shamans" rather than "medicine men" as a general term:

>> I was under the impression that "medicine man" was a word that was only used by a small percentage of NA tribes, and did not make a good generic term . . . <<

This statement is true enough. The point is that "shaman" isn't the best term to use if you need one. It's even less generically correct than "medicine man."

My dictionary gives two definitions of "shamanism": 1. The religious practices of certain native peoples of Northern Asia. 2. Any similar form of primitive spiritualism, such as that practiced among certain North American Indian tribes.

The first definition is the official one. The second definition is a bastardized version of the first one. Anthropologists, ethnographers, and other Western interlopers thought all "primitive" religions were the same, so they lumped them under one umbrella term.

As someone said, it's like calling any carbonated cola drink a "Coke." It may get the point across in casual conversation, but it's not accurate. Same with "Xerox" for photocopy, "Kleenex" for tissue, etc.

What's so bad about using "shamanism" as a general term for Native religions? As the dictionary goes on to state, shamans are priests who can communicate with or even summon the spirits of the world. I believe most practitioners of Native religions wouldn't claim this power. They may worship or pray to various spirits, but they don't enter into direct talks with them. Or summon them to perform magic.

Using "shaman" is generally wrong because it implies Native religions are inhuman and unearthly compared to Western religions. Shamans are supernaturalists who order spirits to enter or leave bodies, smite one's enemies, and do other feats of legerdemain. That isn't what Native religions are about.

Though it's not a Native word, "shaman" may be the right term in a few cases, just as "medicine man" is the right term in some cases. I've seen "shaman" used most often to describe religious leaders among Northern California Indians and the Athabascan people of the far north (which isn't surprising, since they share cultural traits with their Siberian relatives). But again, the point isn't whether "shaman" is correct in some cases, but whether it's the best choice to describe all Native religious leaders.

Native religions aren't "strange"
Fact is, Native religions are conventional in the broad sense. You have your pantheon of gods, spirits, and other holy beings (like Christianity's God, angels, saints, and Virgin Mary). And you have your daily rituals, annual ceremonies, and one-time events (akin to Christianity's baptism, Mass, Communion, Easter, Christmas, and so on). Just as Western practitioners do, Native people conduct their religion to honor their sacred beings, secure their blessings, and mark the stages of life.

Sounds pretty normal, doesn't it? No summoning of spirits to cause people to levitate or speak in tongues. Native religions are generally full-fledged religions with as much richness and history as Christianity, Buddhism, or Islam. Calling them "primitive" or treating them as a series of parlor tricks is an insult.

So what term(s) should we use for Native religious intermediaries? Each language has its own terms, of course, but you can't use them to generalize. The Navajo have "singers," for instance, because some of their major ceremonies are sung.

As you say, "medicine man" doesn't always apply. From what I've seen and read, Native people call their intermediaries "elders," "holy men," or simply "priests." "Priest" may be the best term because it implies the same level of authority as in Western religions.

Priests can conduct ceremonies and administer sacraments. Priests can't set religious policy for a whole society—unlike bishops, cardinals, or popes. And The Exorcist notwithstanding, priests don't practice hocus pocus like ordering spirits to do their bidding.

That's why "shaman" was wrong in the TOTEMS comic, and why it's generally wrong when referring to Native Americans.