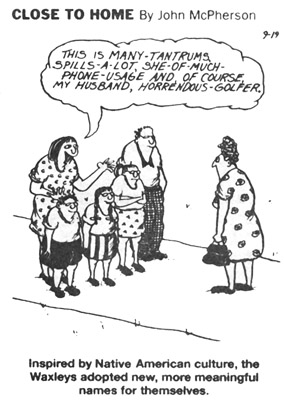 Does Rob understand humor?
A correspondent got me curious, so I searched my site to find out how much I and others had discussed Native American and ethnic humor there. Quite a bit, as it turns out. Here are some examples:

The movie The Road to El Dorado:

And a few of my attempts at humor:

Also, most reviews of my comic say something about my sense of humor:

The point of this survey is 1) I'm confident of my sense of humor, 2) I've considered the issues of ethnic humor, and 2) having a sense of humor doesn't mean laughing at insults or stereotypes.

A discussion with the correpsondent follows.

Stereotypes are unfunny, mean
>> I looked over all the stereotypes that you detailed. I didn't think any of them were particularly funny and many were just plain mean. <<

>> I guess I am guilty of ignoring these things in my day to day existence. However I cannot help but think that the main reason these things didn't come up on my screen are that, by and large, these stereotypes are STUPID and I have trained myself to ignore stupid things, since if I didn't, what with all the stupidity in the world I'd be doing nothing else. The people who wrote these things or otherwise created them have to be stupid to think this was worth doing. The people who think they were funny (or at least so funny that it makes up for the mean stupid core of the work) also appear stupid. <<

However imperfectly, the stereotypes reinforce the "common knowledge." If Irishmen weren't heavy drinkers, the thinking goes, all the stereotypical works wouldn't show them drinking. Therefore, people imagine the stereotype is largely true, even if they don't know.

That's why I steer away from ethnic humor. If you make enough jokes about Pollacks being dumb or Jews being avaricious, these views become embedded in the social fabric. Whether they're true or not, they become the default position—the baseline against which reality is measured. Even if "smart" people know better, they become a habitual way of thinking. And the people who are the brunt of this thinking must fight constantly to correct it.

A posting on my site explains this problem well. It's The Trouble with Stereotyping...and What to Do About It. The point is that a stereotype is a rote way of thinking. Even smart people think by rote at times—it's unavoidable—and stupid people definitely do. So a lot of people have stereotypes on the mind whether they're bright enough to know better or not.

"Injun" joke an exception?
>> However the "joke" in which the two stupid cowboys are trying to decapitate the poor fellow they knocked out with a rock, though full of offensive stereotypes, really portrays the white people as evil, greedy, and stupid in the extreme. <<

I agree the primary focus of the Joke of the Day was making the cowpokes look bad. But the subtext is still negative toward Indians. It's stereotypical if not downright racist.

You may respond that all these are part of the joke—that they serve to ridicule the white cowpokes who think they're going to get rich. No, they don't. The alleged redness of the Indians' skin doesn't contribute to the punchline. The number 5,000 doesn't contribute much either (the joke would work if the number were 50 or 500 rather than 5,000). The title calling Indians "Injuns" doesn't contribute anything. And describing Indians as wanton child-killers, or showing their heads as trophies, does nothing to enhance the joke. These are vicious critiques, not justifiable humor.

If you're not clear on this point, omit the joke's first two paragraphs. Say the two blonds see a "Wanted" poster offering $1,000 for an Indian's head. Isn't that the joke's essential setup? Doesn't the punchline flow just as well?

I'd say it does. So the two initial paragraphs are inflammatory race-baiting that have nothing to do with the alleged humor. They're the epitome of gratuitous hatemongering.

Who comes out worst?
>> The punchline of the story is the completely inappropriate and stupid reaction of the two cowboys when confronted with thousands of people who witnessed their assault and murder of one of their number. One might interpret it as black humor about the hatred directed against Indians and the essential self destructive nature of that type of hatred. The fact is that the two stupid cowboys in the story are the bad guys in spite of the hateful things in the story said about indians. I see this as a situation where the hate speech in the story sets the listener up to believe that this story is racist story against indians. However, the fact that the racist and stupid cowboys end up in the story as just about to get their comeuppance leads me to believe that this is not necessarily an anti-Indian story. <<

How the cowpokes end up doesn't change the impression left by the racist points larded throughout the joke. The ending and the context are two separate issues. No one is saying the joke makes Indians look stupid compared to Anglos. It clearly presents the cowpokes as the stupid ones. But the context makes Indians look warlike, evil, and animalistic.

>> After all we know that there still are stupid and mean spirited people who are as racist as the white characters in the story, those people exist and any way you can point out that such attitudes are at the very least self destructive is not entirely bad. <<

When the visitor walks in with an Indian head under his arm, and the barman talks about a deadly Indian attack, these people aren't being mean-spirited. They're acting neutrally within the joke's context, and the joke reports their actions neutrally. As far as the joke's audience is considered, these are facts setting up the "humor" at the end. No one mocks or castigates the visitor or the barman for believing Indians are subhumans.

True, many people has similar attitudes in the "Wild West." And if this were an 1875 joke reprinted verbatim, I wouldn't criticize it for its racist attitude. But this is a joke presumably invented in the last few years. It tells today's audience that Indians were warlike, evil, and animalistic. It reinforces the longstanding stereotype of Indians as savages.

>> However, because of the hate speech needed to set up the joke, I don't think the story deserves much retelling in this day and age. <<

Yes. More important, it doesn't need inventing in this day and age. And with characters named "Jeff" and "Dave" and labeled "blonds," I'm pretty sure it's of recent vintage.

19th-century humor?
>> I suppose you could say something along the lines of describing the era and place as an Indian-hating place and time, but I don't think the amount of humor in the story is worth the nastiness of the setup. <<

If you were inventing jokes for a novel set in 1875, it might "work" in that context. That isn't the joke's context. You're supposed to laugh at its racist depiction of Indians now, not at how people envisioned Indians then.

I'm surprised the joke's racist context isn't obvious to you. Let's try an analogy to make the problem obvious. Suppose we did an updated version of Hogan's Heroes set in Auschwitz. Since Jews are stereotypically considered to be greedy moneychangers, the heroes are a small band of Jewish prisoners who buy and sell the other prisoners' worldly possessions (gold teeth, etc.) to keep themselves alive.

But have no fear: The butt of this laff riot isn't the Jews. It's the Nazis—specifically Auschwitz's vainglorious commandant, Colonel Klink, and his bumbling Sergeant Schulz. Each week the Jews use their ill-gotten gains to show up the Nazi brass.

You yourself said the joke is full of offensive stereotypes. Does the alleged humor somehow negate the stereotypes, render them meaningless? I don't think so.

The discussion continues....
>> I agree with you and I see that I have been wrong in the past. << 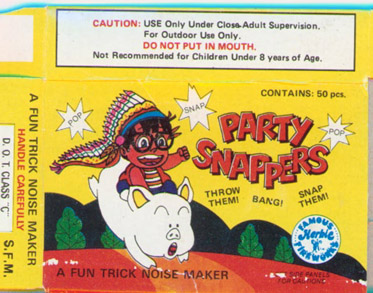 I get worked up about this issue because I hear claims that "it's just a" joke or whatever all the time. I'm amazed people don't see through this. Imagine a minstrel show last century with two "darkies" making fun of President Lincoln—perhaps throwing a pie in his face. The white person is nominally the butt of the humor, but the source is the stereotypical darkies.

The humor exists because it juxtaposes lofty, civilized white people with primitive or ignorant minorities. Even if the humor "works"—it's legitimate to humble a mighty president—what does the context say about society? It implicitly says whites are superior to minorities.

Enough ranting and raving about this subject...for this month, at least! <g>