Mainstream America's usual responses to the mascot issue include: "We're honoring Indians," "Get over it," and "What about the Fighting Irish?" These responses are all old, trite, and invalid. Indian people and their supporters have addressed them a thousand times.

Let's dismiss these arguments once and for all:

"We're honoring Indians":  Only the people being honored can determine if the honor is, in fact, an honor. Indian people almost universally deny feeling honored by mascots.

"Get over it":  Get over being criticized. If you don't like the criticism, either resolve the problem to make it go away, learn to like it, or get the hell out of the country.

The "Fighting Irish" argument is perhaps more substantial and deserving of consideration, so let's give it its due.

The "fighting" stereotype
For starters, the problem with any warlike name—the Warriors, the Braves, the Fighting Sioux, et al.—should be obvious. It's a stinkin' stereotype. It compares Indians to soliders, killers, thugs, barbarians, and animals.

People such as the fellow below just don't get it, so here's the explanation, once and for all:

>> I am totally exasperated by those activists and journalists who continue to spout the completely illogical belief that "UND Fighting Sioux" is insulting. I have never heard anyone, Native American or otherwise, make a single successful argument to prove that "Fighting Sioux" is in any way insulting or derogatory. <<

Apparently you haven't read this posting. Read it now and weep.

>> "Fighting," of course, refers to the entire reason why the Sioux name is employed by UND athletic teams, because those teams seek to perform in the spirit of the Sioux warriors, noted for their battlefield prowess. Also, nothing insulting there. <<

It doesn't matter one whit how noble or honorable you think the warrior mantle is. It's not for you to decide. How would a shy Indian mother like being "honored" for her battlefield prowess? How about an Indian version of Martin Luther King Jr.? If you think everyone likes being compared to a warrior, get out and talk to the world's population—the majority who aren't gun-toting American males.

Even if the label is 100% accurate the first time it's applied, it becomes a stereotype the more it's used. Suppose someone calls a really smart Asian man a "brain." He may be flattered the first time because it reflects his positive self-image. Now suppose people call him "brain" ten times, a hundred times, a thousand times—nothing but "Hey, brain, how's it going? Solved any quadratic equations lately?" It's patently obvious that this "honor" becomes a stereotype—a caricature if not an insult. It denies the man's full humanity by portraying him as an egghead and nothing else.

The "warrior" label is analogous. It caricatures Indians as one small part of their totality. Many Indians were warriors only when forced to defend themselves—and many were never warriors at all. Why would they want a name that barely applies to them, if it applies at all?

So sports fans have reduced a complex people to a cardboard cutout—a stereotype. But still, goes the argument, these fans mean to honor Natives, not insult them. Shouldn't we acknowledge their intent?

No. The "honor or insult" dichotomy is false because a stereotype doesn't have to be insulting to be harmful. Reducing a people from three dimensions to one is itself a harmful act.

But don't take my word for it. The evidence of stereotyping's harm is long and varied. I've posted some of it at The Harm of Native Stereotyping:  Facts and Evidence. 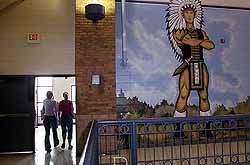 If this were the first or second time Native people had received this "honor," it might not be annoying. They might shrug it off just as Asians shrug off being labeled "nerd" or "geek." But Indians have heard that they're warriors, raiders, marauders, wild men, and savages a million times since 1492, and they're understandably sick of it. I would be too if I were in their position.

In the Online Athens newspaper, 8/27/01, Edwin Poulin, a Sioux from South Dakota, testified that

So the image is phony, which proves this school, at least, isn't honoring local Natives. Whom is it honoring, then? A fictional warrior only vaguely related to the Indians who existed. That's about as accurate as dressing a Pilgrim as a pope...or as a Jew.

If you're a white, Anglo-Saxon Protestant, would you be honored to be called a Nazi soldier? Why not, since Hitler's troops were known for their ferocity, their battlefield prowess, their singleminded devotion to a cause? A peaceful Cherokee farmer whose ancestors came from Georgia is no more related to a Plains Indian warrior than an American WASP is to a German Nazi. 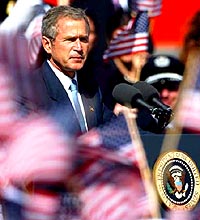 Just as athletes honor Indians, I've honored George W. Bush by comparing him to another bold, fearless, uncompromising leader. For more on the honor issue, see Smashing People:  The "Honor" of Being an Athlete.

>> I challenge anyone to make a successful case to prove that "Fighting Sioux" is in any way insulting. It can't be done because it is an honor, not an insult. <<

It's done. You lose the challenge. Better luck next time.

Not clear on the concept yet? How much simpler can we make it? The warrior image is a stereotype. An Indian warrior is neither a ferocious savage who carries weapons intending to fight or kill, nor a thuggish athlete who seeks glory by battling and defeating others. Neither association is an especially great honor.

Note whom sports teams tend to honor: Fighting Sioux, Fighting Illini, Apaches, Mohawks—i.e., Natives with a reputation for being tough or ferocious. If there's a team named after the Hopi, Pomo, Tlingit, Creek, Powhatan, Abenaki, or Inuit people, I've missed it. If mainstream Americans were honoring Indians, they'd name teams after these people. What they're honoring is their stereotype of Indians.

Moreover, "honoring" people for ancient achievements implies they're dead and gone, or at least that they haven't done anything worth honoring recently. It's a backhanded compliment, like bestowing life achievement awards for something people did 50 years ago but not for their recent work. It's not nearly as complimentary as the complimenters believe.

On to the "Fighting Irish"
Here's an online posting that implicitly denigrates the Indian position and suggests Indians should get over it, just as the Irish have:

To put it in simpler terms, you don't kick people if and when they're down. Not if you want to consider yourself a morally upstanding person, that is.

Good points, Robert. I agree with you.

More on the leprechaun from Irish correspondent Jamie:

If the Irish want to be portrayed as inhuman creatures that are troublesome at best and evil at worst, that's their prerogative. But why would Indians want to be put in the same category?

More arguments distinguishing the Irish from Indians
From For Dignity's Sake, Stop Using Indians as Sports Mascots by Tim Giago. In the Houston Chronicle, 9/17/05:

From Darken Up, A-Hole: Reflections on Indian Mascots and White Rage (8/10/05) by Tim Wise, recounting a barroom discussion with a mascot fan:

How the Irish chose their nickname
From the Daily Southtown:

Related links
Team names and mascots
The harm of Native stereotyping:  facts and evidence
Stereotype of the Month contest

Readers respond
"It's time for the Indians (and native Hawaiians) to just get over it. They're not the first group of people to be conquered and they won't be the last."
"[M]ost Irish...have embraced that stereotype and made it our own, taking a perverse pride in the image we have in popular culture."
"[T]o dismiss the sufferings of a people that has gone on so long in order to try to make a point about the sufferings of another serves no true purpose."
"Just because someone calls me a bad name doesn't mean I am any less a person."
"[Y]ou are incorrect on many points regarding the Irish."