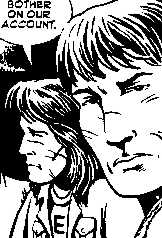 The plan is to publish a graphic-novel version of PEACE PARTY, the multicultural comic book featuring Native Americans. With action-packed but authentic stories of America's cultural diversity, PEACE PARTY will counteract the lone-gunslinger mentality featured in the mainstream media.

Summary
America's youth is at risk from dysfunctional schools, social stresses, and post-industrial iniquity. The problems are particularly acute among Indian and other minority youths, whose values, worth, and very presence often are denied by mainstream society. The repercussions are all-too-evident in the daily news: shooting sprees, hate-filled attacks, gang-banging, alcohol and drug abuse, school dropouts, unwanted pregnancies, and suicides.

This proposal seeks funding to publish a graphic novel (a comic book in paperback form) called PEACE PARTY. The volume will ask whether a Native philosophy of peace and harmony is valid in this age of just wars and trickle-down economics. If successful, it will counteract negative cultural influences and reinforce positive ones, contributing to a more aware, concerned, and compassionate populace.

As a writer, researcher, and entrepreneur, I produced and self-published a well-liked PEACE PARTY comic book. Now I hope to take PEACE PARTY to the next level. As I did before, I'll supplement my efforts by working with Native American experts and organizations to ensure the work portrays Indian people and culture faithfully. The result should be a work that amuses and entertains while providing an important alternative perspective.

Introduction
America's cowboy mentality has never been more pervasive. The media inundates us with messages to be macho (Eminem), sexy (Britney Spears), whatever it takes to beat the competition. Even game shows urge us to be a millionaire or a survivor—anything but a loser or the weakest link.

The media is the purveyor of these cultural values. Movies, music, and video games hammer home the "Be a victor or a victim" theme. Comic books and cartoons also contribute.

These lowly "pop" genres have more influence than people realize. A comic can sell 100,000 copies, dwarfing many books and magazines. Millions watch cartoons on Nickelodeon, the Cartoon Network, and the WB, not to mention prime-time shows like The Simpsons and King of the Hill. Comic book-type characters—the Lion King, the Power Rangers, Pokemón, Harry Potter—are some of the best-known cultural icons today. Studies show more kids can identify Joe Camel and the Budweiser frogs than they can the US president. Video-game, TV, and movie producers (James Cameron, Tim Burton, Roger Corman) all employ a comic-book "sensibility" in their work.

Unfortunately, most comics publishers pander to children's worst instincts. Titles such as PUNISHER, WAR MACHINE, and DEATHSTROKE reflect the darkness and despair seen in other entertainment media. The message these products send is to be selfish, shortsighted, and uncivil. Why keep learning or working when the guy with the biggest guns and "baddest" attitude wins?

But if comics are part of the problem, they also can be part of the solution. They're still a cheap, accessible means of providing youngsters with stories. As a writer and artist, I've used this medium to counteract the negative images pervading our culture. PEACE PARTY is my contribution to the ongoing struggle for the hearts and minds of our children.

Many teachers support the idea of using pop media to send a countervailing message. One, Evalyn Daverin, says, "I think your idea and approach have a great deal of merit. My intermediate students are still very visual in their learning—pictures help them capture the sense of the stories." Another, Beth McKinney, adds, "I have used comic books with social/cultural themes in them with my middle school students and they loved it." Raymond Gipson, a Native American teacher, says simply, "Your proposal sounds great."

Problem statement
Johnny and Janie don't read much these days, and when they do, they don't do it very well. Only 50% of eighth-graders read for fun once a week or more often, according to the 1992 National Assessment of Education Progress (NAEP). Not coincidentally, only 28% of these eighth-graders meet a national panel's reading standards. The NAEP spells out the connection: Those who read more also read better.

Reading proficiency is worse among minority youths, especially Native Americans. While 34% of white eighth-graders meet the national panel's reading standards, only 18% of Indian eighth-graders do likewise. In 1997, Indian educator Dr. Dean Chavers reported: "In data I collected from two different reservations, American Indian students were reading under one book per year outside the classroom."

Perhaps Johnny and Janie don't read much because other media sources are overwhelming the written word. These sources are filled with images of sex, violence, and death. An LA Times editorial observed that "by the age of 18, Americans have witnessed 40,000 murders and 200,000 acts of violence on TV." 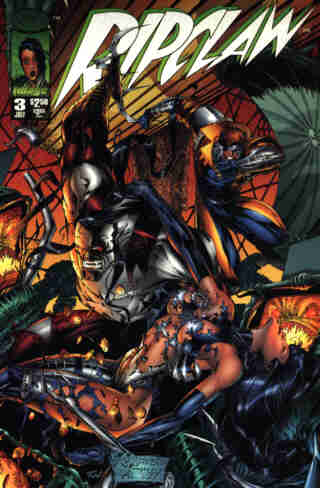 Though experts dispute the exact connection between the media and youthful angst, few doubt there's a link. According to David Grossman, co-author of Stop Teaching Our Kids to Kill: a Call to Action Against TV, Movie and Video Game Violence:

Dana Mack, author of The Assault on Parenthood, noted that parents "complain that their children are desensitized by the ubiquity of violence on television, from cartoons to cop shows." These elements are also present in death-dealing video games and comic books where good guys smash through walls and pound villains. The message is that action solves problems and talk is a waste of time.

Of course, violence isn't the only problem the media fosters. More than ever before, images of sexuality, materialism, and self-interest inundate our children. Mack quotes one father as saying, "We live in a fast-food society—I mean instant gratification—and a lot of it has to do with the media."

Besides these general problems, minority youths have their own particular concerns: the lack of role models, the marginalization of their beliefs and values, the destruction of their cultural heritage. With its glorification of sex and violence, the media harms rather than helps. A statement on language from Ron Lupe, when he was chairman of the White Mountain Apache tribe, paints the picture:

The problem is clear. As Philip Hale, cousin to the former Navajo president, put it, "Youth now need something to grab their attention because they have a limited attention span." One solution is also clear: a multicultural comic book. Give kids something they'll read, with dynamic art and action-packed stories to keep them turning pages. But instill it with something more than mindless mayhem: progressive role models, thought-provoking questions, and moral lessons with no easy answers.

Unfortunately, this type of comic is rare. Though a few publishers have begun to diversify their offerings, it's difficult to find comics featuring women and minorities. Those that do often employ the same old stereotypes: blacks and Latinos as "gangstas" and Native Americans as warriors, not doctors and lawyers. They reinforce the American mindset of "might makes right" and "shoot first, ask questions later."

A comic book about Indians is especially appropriate for the goals espoused here. Because Indians are one of the most at-risk minorities, Felix Cohen, the father of Federal Indian law, likened them to "the miner's canary." The problems they face—prejudice, poverty, crime, health care, environmental degradation, cultural disaffection, spiritual malaise—are problems all Americans are grappling with.

Tall Oak, a Narragansett quoted in the documentary 500 Nations, calls Indians the conscience of America. "The lesson," he says, "is to realize the value of an alternative perspective. And that is why we are here. That is why the Creator allowed some of us to remain, in spite of all the attempts to destroy us."

A work that can convey this feeling to our children can be a powerful agent for change.

The reason for this is clear. Comic book dealers won't order a "different" product from an unknown creative team. If they don't order it, their customers won't see it and won't buy it.

This is a problem facing all independent comics publishers. The solution is to publish the comic as a graphic novel. This format has several advantages over the standard periodical.

Unlike monthly comic books, graphic novels have an indefinite shelf life. Rather than wait or search for individual issues, fans can purchase a complete story in one volume. Buyers perceive graphic novels as a more serious form of literature. Mainstream bookstores treat it as such, opening a huge new channel for sales.

As a graphic novel, PEACE PARTY will offer the same "hooks" as the comic book. These hooks will help establish the book's credibility and generate interest among fans, retailers, and the media. Among them are:

As before, Blue Corn Comics will market PEACE PARTY with an intensive campaign of press releases, review copies, and online postings. Primary among these will be e-mail notices to our network of Native contacts, which can spread the word throughout Indian country at no cost. We'll continue to pursue alternative distribution channels such as bookstores, grocery stores (e.g., Basha's), Indian powwows, Western art galleries and shops, direct mail, and the Internet. Together these should provide ample opportunities for success.

How it might work
One possibility for publishing PEACE PARTY is to partner with a 501 (c)(3) organization. Any organization dedicated to promoting Native culture, art, or education would be an ideal candidate. Together we'd seek grants to publish PEACE PARTY as a cultural, artistic, or educational resource.

Here's what the partnership would entail:

So, the question: Do you know any nonprofit organization that might participate in this project? If so, please have them contact the publisher. Thanks for your help!

Related links
The genesis of PEACE PARTY
Why write about Native Americans?
Publisher's biography
More on the publisher's background