The pitch
I see a series of graphic novels covering all aspects of Indian Country. Each one would have 5-7 stories exploring a particular theme. The theme could be a tribe, a region, or a subject—any set of stories that would fit together, really.

Sample themes
Some sample themes and the stories that could comprise them:

The battle over the return of the Black Hills, a fictionalized version of the Kevin Costner Resort story, a remembrance of Wounded Knee, an adaptation of the movie Thunderheart.

A lighthearted look at all those who have Cherokee "princesses" in their family tree, a serious look at the groups and individuals struggling to be recognized as Cherokee, an adaptation of Barbara Kingsolver's Pigs in Heaven.

Father Junipero Serra and the mission system, prospecting for gold in the desert, cowboys and Indians in Hollywood, a fictionalized version of Disneyland and Pocahontas.

The true story of the codetalkers from the Native point of view, a fictional codetalker story a la The Great Escape, a modern superhero story starring a codetalker's descendant, other war stories about Indians (Ira Hayes, Vietnam).

Tearing down dams to protect the salmon, a battle over treaty hunting rights, conservative attempts to end sovereignty, an adaptation of a Sherman Alexie story.

A battle to protect a sacred site (e.g., Mt. Graham), a court case on religious freedom, an Indian torn between her Native religion and Christianity, a priest who abuses children (very topical at the moment). 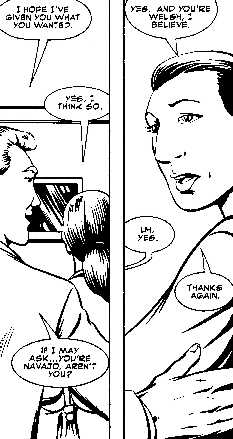 Fictionalizing subjects
With our mixture of humor, intrigue, melodrama, and (super)heroics, I'm confident we could do an entertaining story on almost any subject. Take crop genetics, for instance. A dry and technical subject, right?

Well, imagine this: Big Agribusiness has bred crops so they don't vary genetically anymore; only a few Native plants still contain a crop's original genes. So a terrorist decides to release a genetically engineered pest to take advantage of a crop's vulnerability. Billy and Drew race to stop the terrorist before he can destroy America's breadbasket and bring the country to its knees.

Serving a sponsor's needs
Each volume could have a sponsor or sponsors: an Indian tribe, a tribal department or business, or an unaffiliated Indian organization. The volume would highlight the issues and concerns of the sponsor(s), perhaps depicting real people, projects, and achievements. The stories would be entertaining first and educational second, so they'd appeal to a broad audience. And they'd be honest and accurate, with the sponsors and our Board of Advisors reviewing them to ensure our trademark authenticity.

Making it happen
The sponsors wouldn't have to do much to make this happen. They'd mainly lend their names so we could secure funding from the government, foundations, and other sources. Blue Corn Comics would do the work of applying for grants and producing the comics. The result would be a high-quality, color volume of exciting, Native-themed stories.

If the cause had some universal appeal—e.g., promoting sovereignty or gaming, fighting mascots or stereotypes—we also might solicit donations from tribes, organizations, and individuals. Other fundraising techniques, such as selling naming rights or holding auctions, might contribute also.

This vision extends and enhances my previous vision. Before I emphasized doing the stories I wanted to do, set in the American Southwest. That'll still be a mainstay. But now I'm adding a service component. In addition to promoting Native people and culture generally, PEACE PARTY can help tribes and organizations achieve their specific goals. It can be informational vehicle for Native causes—a way to educate people while entertaining them.

Why this approach?
Where do most people get most of their info about Indians today? Not from the mainstream media, which rarely covers Native issues. People wouldn't know about the Navajo codetalkers, for instance, from watching E! Entertainment or the nightly news. But because of Windtalkers, a fictional movie, they'll learn. (They still won't know that some codetalkers were from the Hopi, Comanche, and other tribes.) 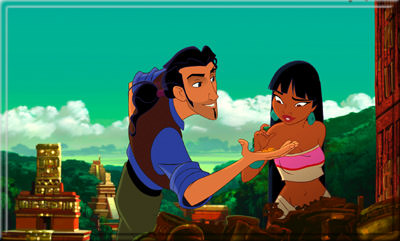 With few exceptions, the sources are still the same: old books (Last of the Mohicans, textbooks), Western movies, the Lone Ranger and Tonto, the Y-Indian Guides, sports and product logos (Washington Redskins, Indian motorcycles), Dances with Wolves, and Pocahontas. Recent portrayals—movies like The Road to El Dorado, comics like TUROK, comic strips featuring Natives—are as likely to be bad as good. Let's replace these out-of-date sources with PEACE PARTY comics, making them the mainstream source for Indian stories in the 21st century.

If you know people who are fond of comic books, let them know about PEACE PARTY and this new emphasis. That applies especially to prominent people in politics, education, social causes, entertainment and the arts, and the media. Give them this pitch, or have them contact me and I'll give them the pitch. I'll send them all the materials they need to make an informed decision.