The evidence against "redskin" 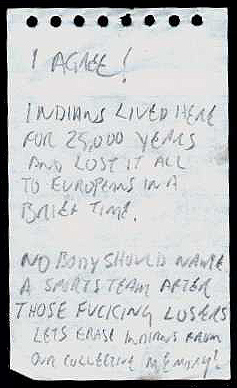 "Redskin" describes "stalwart attributes"?
Someone disagrees with Harjo's "mountain of evidence." From the Washington Post, 1/26/02:

When you say, "Interestingly, most of the people who sizzle with outrage over Indian team names and mascots are not Indians"—well, of course, since about 99% of Americans aren't Indians. The more important question is what percent of Indians and non-Indians oppose "redskins." From what I've seen, the percent of Indians who oppose this word may approach 80%.

When you say, "Another version has the team being named for the white men who dressed up as Indians to stage the Boston Tea Party at the start of the American Revolution. Yet another genesis story says the name stems from the colored clay that Plains Indians used to paint themselves for tribal ceremonies," you've confused two things. One is how the Washington team chose the term "redskins" for its name. That may include the Lone Star Dietz and Boston Tea Party theories. Another is where the term "redskins" originally came from. That includes the "red clay" theory and a leading theory you didn't mention: that "redskins" came from the European practice of collecting bloody Indian scalps for bounties.

Quoting Wetzel without quoting an Indian who disagrees with him is bad journalistic practice, unfortunately. Any search would identify thousands of Native people who would tell you Wetzel doesn't know what he's talking about. I hope you'll consult with one of them next time you write about the subject.

Addendum (7/15/02)
I've never heard any linguist say "redskin" describes stalwart attributes. Naturally, Fisher doesn't name these linguists so we can examine this claim for ourselves.

Which attribute is supposed to be "stalwart," anyway? Is it the redness or the skin? Any other attribute is in the unnamed linguists' minds, not in the word itself.

Rob's reply (1/31/02)
>> It is a reported column and I eschew punditry, but it remains a column, not a news story, and therefore I do not always present all sides of an issue, but rather my own view of it. <<

Even in news analyses and columns, presenting both sides of an issue is the ideal. But if you've written on the subject before and presented the other side, I understand.

>> While I spoke to many people—Indians and non—who oppose the Redskins name, and I have quoted them at length in previous columns on the same issue, I did not do so in this most recent column because those viewpoints are rather thoroughly discredited. <<

I'm not an expert on the origins of the word "redskins," but six people who say they can't prove the "bloody scalp" theory doesn't discredit it. It merely means the origin remains to be determined. How many experts have traced the word to the "red clay" origin and what's their evidence? Until you can answer that, I'd say you haven't credited or discredited either theory and should present both, along with any others that may apply.

>> I'm interested in your statement that 80 percent of Indians oppose the name; most of the Indians I've heard from endorse it. That's hardly a scientific sampling <<

Definitely not. First, the people who call or write you are likely to be those who favor your position. Second, you can't even verify that a caller or writer is an Indian without a lot of work. Third, you write for a paper that supports the Washington Redskins. Thousands, perhaps millions, of fans in your area are biased in favor of the team.

>> I wonder if you know of any effort to do a more thorough survey of Indian opinion on this. <<

My figure comes from the Indian Country Today newspaper, 8/7/01. The paper polled Indian "opinion leaders" and 81% of the respondents found the term "redskins" offensive. While that sample is unrepresentative also, I'd say it's far more representative than people who contact newspaper columnists in the Washington Redskins area.

I cite the figure because it mirrors what I see in the media—not in the self-selected pool of people I talk to. Hundreds of Native tribes and organizations, each with hundreds or thousands of members, have gone on record opposing mascots. So has every well-known Indian I've heard about—people like Russell Means and Sherman Alexie. If any Native leader has come out in favor of mascots, I missed it.

In the collective reading I've done on the subject—many hundreds of articles—I'd say the vast majority of Native people (not liberal white agitators) oppose Indian names and mascots such as "Redskins." I'd say the 80% figure reflects the reality. Until I find better information, I'm comfortable using that as the "best guess."

The bloody-scalp theory (7/16/02)
The following is an excerpt from an article published c. 5/29/02. The article is about activist Eugene Herrod's battle against the state of California for issuing a "REDSKINS" license plate. It's noteworthy here because Herrod describes the research of Duane Champagne, a respected Native scholar and author.

Champagne has published research showing the word's derivation from the practice of collecting scalps. He's put his name on the research, unlike the anonymous scholars Fisher mentioned. If Fisher thinks someone or something has discredited this work, let him identify the source. Until then, Champagne's work is as definitive as anything we have.

As for Indians who are proud to see themselves slurred by nicknames such as "redskins," see Team Names and Mascots for some interesting research on the subject. I suspect the reasoning is similar to the reasoning of African Americans who have adopted "niggers" as a term of pride. It doesn't change the word's offensive history.

Native people sometimes use the slang term "skins" for themselves. Clearly, they've appropriated "redskins" and transformed it into a positive symbol. As with black people, the key is who gets to label whom. Many ethnic groups joke about their own ethnic foibles, but don't appreciate it when outsiders make the same comments.

Another note to Fisher (1/31/02)
I've read (in Through Indian Eyes) that the word came from the Delaware practice of painting one's face red with berry juice—not from smearing red clay from out West on the face. So there's a third theory for you to mention. Since the word arose shortly after the first European contacts, it seems plausible.

More on the origin of "redskins"
Indians really red-skinned?
Harjo:  Paper Beats Rock and the Spoken Word
A Linguist's Alternative History of 'Redskin': Term Did Not Begin as Insult, Smithsonian Scholar Says; Activist Not So Sure

Someone else responds to Fisher (1/31/02)
A reply to a request I sent out on the Internet titled "Columnist thinks most Indians favor 'Redskins'—needs help":

Rob replies to Fisher once more (2/5/02)
The following article rebuts some of Fisher's claims. An excerpt shows how he shaded the truth by invoking Dietz and Wetzel:

As I wrote to Fisher:

Note the mention of the "voluminous evidence about the meaning and use of the R-word and how most Native Americans despise it." This evidence convinced three judges to unanimously rule the name "Redskins" was offensive and therefore not protected by patent and trademark law.

More thoughts on Native use of "redskins"
From the Washington Post, 9/16/02:

Related links
Team names and mascots
Smashing people:  the "honor" of being an athlete
The Sports Illustrated poll on mascots
The harm of Native stereotyping:  facts and evidence

Readers respond
"[A] parable about a football game between the Whiteys and the Darkies" is "based on a fallacy."
"Should team mascot names be reported in sports sections? Or does censoring them...have some sort of positive effect on the situation...?"
"I thought you might be interested in an example where a Native American baseball team apparently named itself the 'Red Skins.'"