Another response to Team Names and Mascots:

Rob's reply
The next day I sent Fisher a message:

I must've missed something. Where was the fallacy in Courtland Milloy's parable? If you found a fallacy, you didn't identify it in your response column. Instead, you talked about things unrelated to Milloy's main point: that "redskins" is a slur comparable to "darkies."

>> As I noted in the column, there are many team names that have ethnic derivations yet are neither meant nor taken as slurs. <<

Oh, I see. The "fallacy" you mentioned in the second paragraph of your column was the one you finally began to discuss in the eighth paragraph. After spending five paragraphs on unrelated points. Hmm...not exactly crystal-clear writing there.

So your examples include:

Let's see..."Rajah" is a title or position, not an ethnic group name. The Aztecs, like the Vikings, Trojans, and Spartans, are extinct, so no one's left to protest the use of their name. "Whiteface" is a breed of cow that only sounds like an ethnic group name. "Hillbillies" is a cultural or geographic designation that doesn't apply to any single ethnicity.

So your "many" examples boil down to four. All are from obscure high schools; none of them have the prominence or reach of a typical college or university. And the Coachella Valley Arabs actually HAVE drawn protests, as you'd know if you read the following: 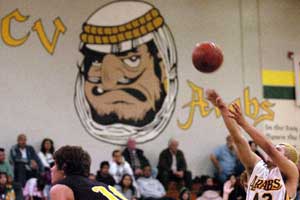 So out of the tens of thousands of college and high school nicknames, you've found three valid examples of non-Native ethnicities used as team names. None of them are repeats; each ethnicity is used only once. And this is what you consider comparable to the three thousand Indian nicknames (now reduced to 1,200, thanks to mascot foes) formerly in use? The only fallacy I see here is your belief that your three counterexamples are equivalent to the 3,000 nicknames casting Indians as savages or warriors.

In other words, Courtland Milloy's argument remains a lot more valid than yours does. A term that may not have much impact when muttered once can have a profound impact when shouted 3,000 times. Indian activists aren't complaining because one or two schools have stereotyped them as bellicose thugs and villains; they're complaining because 3,000 have.