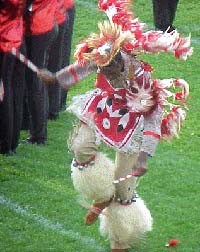 Rob's reply
Here are the answers Eich is apparently too dumb to figure out on his own.

Warriors: No team that I know of is named after Mongol, Alexandrian, or present-day US warriors (i.e., soldiers). Besides, Native people protest the name "Warriors" only when it's associated with Indian warriors, with accompanying warrior logos and mascots.

Braves: Learn the difference between the noun "brave" and the adjective "brave," numbskull.

Indians: "India" is the latinized name of the river Indus. Residents called the region by various names in their own languages—e.g., Bharat or Hindustan. India wasn't a single country until it gained independence in 1947. Besides, teams named "Indians" are named after American Indians, not India Indians. If a team were named after India's Indians, I doubt any Native Americans would protest.

Arrows: No team that I know of is named the "Arrows."

Chiefs: A chief justice, chief executive officer, and chief petty officer aren't chiefs. Again, refresh your memory on the difference between a noun and an adjective. If you skipped fifth grade and never learned the difference, don't parade your ignorance in newspaper editorials.

Red Skins: While you're educating yourself about nouns and adjectives, it would be a good time to learn about simple and compound nouns. "Red skin" is an adjective plus a simple noun. "Redskin" is a compound noun.

Similarly, "gumdrop" isn't what happens when you drop a piece of gum. It's a whole new word. Amazing how the English language works, eh?