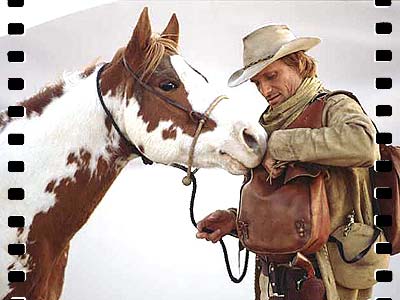 An expanded version of my Indian Comics Irregular essay Hidalgo the Horse Hoax:

One problem: Hidalgo is based entirely on Hopkins' claims. There's no evidence any of it really happened. As critic Bill Muller explains (Arizona Republic, 3/5/04):

As the Billings Gazette reports (2/29/04), an academic debate has raged over Disney's fanciful tale:

Among the movie's flaws:

Kind of a mixed message, isn't it? According to Disney, the movie is "factually based" but not factual. That doesn't exactly ease my concerns.

Sure it is. Then why did Fusco work so diligently to make Dreamkeeper (ICI #106) faithful to the Native legends it portrayed? Why not just make up the legends if "a movie is just a movie"?

Any number of critics have punctured this hot-air balloon of an excuse. For instance:

(For more testimony against Native stereotypes, see The Harm of Native Stereotyping:  Facts and Evidence.)

So should Fusco and Disney not have made Hidalgo? Not at all. Juti Winchester, curator of the Buffalo Bill Museum in Cody, Wyoming, explains how they could have (and should have) done the movie. From the Billings Gazette:

The full story on Hidalgo
Here are the sources for the critique above. From the Billings Gazette, 2/29/04:

From the New York Times:

The reviews
The reviewers were almost as unkind as the historians. A sampling of their comments: 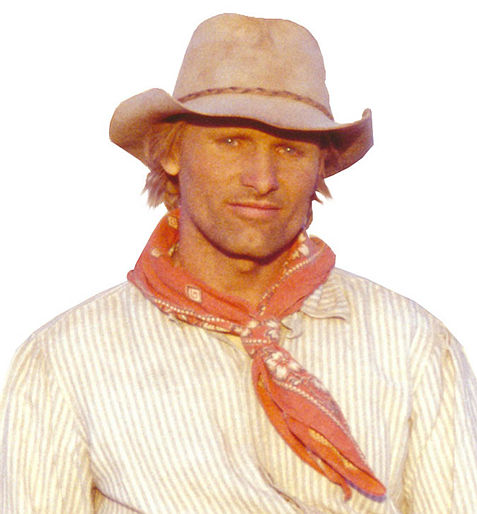 As Bill Muller kindly put it, Mortensen is "a bit too Nordic (his dad was from Denmark) to pass as half-Indian." This race-free casting harkens back to the days of Greeks, Italians, and Jews playing Indians.

Portraying Hopkins as a "half-breed" and a drunk is stereotypical, of course.

Hopkins the horse hero?
John Fusco contacted me in Dec. 2004 saying I was misinformed about the authenticity of Hidalgo. He eventually posted his views on the controversy at Frank Hopkins—2006 Update.

In a message to me, he said he put the same care and research into Hidalgo as he did his other Native projects. Native elders and local ranchers provided oral histories about Hopkins and helped make the movie as accurate as possible. But when they were approaching the end of filming, he was attacked by researchers who claimed he was perpetrating a Hollywood hoax.

These researchers, the O'Reillys mentioned above, claimed they had found a manuscript that contained all of Hopkins's tall tales. But when Fusco examined the manuscript, he found it was written by Hopkins's widow after his death. She was old and embittered when she wrote it and apparently made up the stories to cash in on Hopkins's reputation.

The O'Reillys publicized their bogus findings in an attempt to discredit Hidalgo. They riled up the press, the Arabs, the History Channel, and the scholars who denounced the film, including Vine Deloria Jr. Fusco urged them to look at his evidence, but they declined to act.

Why would the O'Reillys make false charges? Apparently the husband, in particular, was a devout Muslim with chauvinistic feelings toward his fellow Muslims and their horses. He was angry that a movie would show an American riding a mustang to victory over Arabian horses in the Middle East.

I'll have to check the websites you mentioned when my DSL service comes back up. It's not working at the moment. If I can't publish your letter (or any part of it), it would be nice to present your side of the story. I don't want to leave my readers with the wrong impression.

I'm not as concerned about Hopkins's horsemanship or the veracity of the long-distance race as I am about his Lakota origins. I'm not sure what the evidence for that is. Oral traditions? Those aren't necessarily reliable—especially if Hopkins exaggerated or made up his history and others believed him.

Is there anything other than oral traditions to back up Hopkins's claims that he was "an Army dispatch rider who witnessed the Wounded Knee massacre and starred in Buffalo Bill's Wild West Show"? The curator of the Buffalo Bill Museum seemed to say no. Shouldn't there be some record of a person who "starred" in the shows?

Also, didn't Saudi officials weigh in on the question of whether the long-distance race ever occurred? I don't think the naysayers were just one couple or guild with an axe to grind. If the host country denied the existence of the race, that would seem to be significant.

If I'm really curious, I guess I should look at the "Hidalgo and Other Stories" book too. Whatever the truth is, it won't faze me, since I don't have any horse-related agenda. All I care about is reporting the story accurately.

Thanks for the additional information. If this isn't publicly available somewhere, it should be. I always like to see all sides of an issue.

If I were you, I'd take all this information and try to publish it as a magazine article. I'm still not sure why you want to keep it private.

The Arizona Republic article I quoted said: "So far, researchers have failed to find any trace of an Ocean of Fire race, a record of Hopkins riding with Buffalo Bill or any of his other tall tales." That's still a true statement, isn't it? There are oral traditions but no records or other tangible traces of these events?

One of my correspondents summarized the History Channel documentary for me, since I didn't see it. Are there any errors in her summary? She claimed the documentary found an amazing lack of evidence regarding Hopkins's background and at least one lie.

I understand that there were few reasons to associate oneself with Native people back then and many reasons to avoid it. But if Hopkins wanted to preserve the mustangs, that would've given him a reason. "I'm half-Native, so you can trust my knowledge of these horses"...that sort of thing.

My impression of the news reports is that the O'Reillys gained credibility by enlisting 70 historians (on their book) as well as Vine Deloria (if they didn't enlist him, he seems to have taken their side). In a debate over who's telling the truth, it's hard to believe one couple with an agenda could hoodwink Deloria and a plethora of historians. But you do make an excellent case for your position, which is why I want to see it posted somewhere.

I still like the dramatic framework Winchester suggested: having Hopkins as an old tunnel digger narrating tales from his youth. That might've avoided some of the questions about whether the stories and traditions were true.

Incidentally, Thunderheart is at the top (tied) in my poll too. See The Best Indian Movies for the list. And I was there for the First Americans in the Arts awards last year, since I live in LA.

I'm online again with my new cable service and finally getting back to Hidalgo.

Did you write and publish your article correcting the record on Hidalgo? I don't see it on www.frankhopkins.com. In fact, I don't see anything by you there except the Pyle interview. Nothing that talks about the evidence of his Indian background, which is what most concerns me.

I don't see anything about Gertrude Hopkins at www.frankhopkins.com/articles27.html, either. About all the Pyles say is that they recognized Hopkins in the photograph. So the claim that he never sat on a horse is probably false...but I still don't know how much of his Indian background is true or false.

The home page does say:

which isn't exactly a testament to historical accuracy. There seems to be some validity to the critics' charge that "Hidalgo" went well beyond the known historical record. That may be fine in a movie "based on" the true story, but not a movie that purports to be the true story.

>> In response to your final sentence below, Hidalgo WAS "Based On," and never purported to BE the true story. It clearly states up front in the film "Based on..." <<

With language like that, the movie shouldn't stray far from the facts. If it does, critics have every right to point out its flaws or stereotypes.

Final thoughts
Fusco didn't reply further, implying he was too busy to spend more time defending Hidalgo. So I'm left to sum up the controversy myself.

That I quoted articles that turn out to be full of half-truths and mistakes isn't a huge problem. I was just reporting on the controversy, which did indeed bloom. But I was probably wrong to write:

even if it was a paraphrase of what I'd read. Based on oral and written records, it appears that Hopkins was a horseman who participated in races and other escapades in the West, not an urban dweller with an active imagination. A photo of Hopkins on a horse disproves the claim that he didn't know a horse's head from, well, the other end.

I wrote my analysis of Hidalgo—everything up to receiving Fusco's message—before I'd seen the movie. Now I've seen it, so I can comment a bit more on its Native themes.

In Hidalgo, the following things occur:

So...as far as I can tell from my correspondence with Fusco, the idea that Hopkins's mother was an Indian was just a rumor. There's no evidence he was present at Wounded Knee or rode in Buffalo Bill's Wild West Show. There's no evidence the Ocean of Fire race happened, despite its alleged existence for 1,000 years. (A 1,000-year-old event that no one has ever documented must be a world record.)

There's no law against embellishing history for a work of fiction, but huge chunks of Hidalgo—Hopkins's Lakota background and the Ocean of Fire race—appear to be made up. Thus I still question the accuracy of the "Based on the life of" tag, which was the original source of the controversy. If you made a movie about George Washington in which the central conceit was his chopping down a cherry tree, I wouldn't say that was based on the life of Washington. I'd say it was based on the legend of Washington, or it wasn't based on anything.

Addendum (2008)
When I was loading the Pirates of the Caribbean DVD, I came across a trailer for Hidalgo. The on-screen legend said the standard "Based on a True Story." But the trailer's narrator didn't qualify the movie's origin. He called Hidalgo an "incredible true story," period.

I'd say Disney is trying to have it both ways. It's promoting the movie as a true story to increase its sales and viewership. But if anyone doubts the company's claims, it can point to the "Based on" tagline. Hidalgo a true story if you buy it and like it; it isn't if you question or criticize it.

Therefore, critics like me were right to challenge Disney on this point. And John Fusco et al. were wrong to claim Disney made the movie's provenance clear. It's about as clear a hoofprint in a sandstorm.