An expanded version of my Indian Comics Irregular essay Dreamkeeper Keeps the Faith:

Dreamkeeper, an ABC mini-series about the power of Native storytelling, premiered Dec. 28-29. Interweaving myth and "reality," the Hallmark production recounted the life-changing journey of an angry Lakota youth and his grandfather. The reviews were mixed, but I'd say it acquitted itself reasonably well.

Curiously, the responses split along ethnic lines. Natives viewed Dreamkeeper much more favorably than non-Natives did. Some examples:

From the Native American Times:

And from the Native American Times:

The critics strike back
Perhaps because they were less famil-iar with Native history and culture, or less awed by it, non-Native critics were less wowed by Dreamkeeper. Some of their opinions:

Rob's comment
My views fall somewhere in the middle. I admired Dreamkeeper for the same reasons the Natives did—especially for its stereotype-busting ways. But several problems kept me from judging it a superior work of art. Among them were the preponderance of Plains Indian stories, the sometimes hamfisted messages, and the too-pat resolution of the conflicts.

So what's the moral here: that surrendering is the way to succeed? How exactly does this apply to Shane? Is the message that Shane is a failure but should keep trying anyway, because he may get lucky? 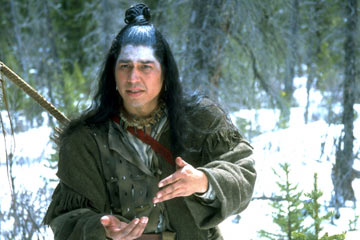 On the other hand, the story of Tehan, in which a white boy adopted into the Kiowa tribe proves his worth, was painfully applicable to the white boy Shane and his the grandfather picked up. The same actor with the same annoying traits played the "real" and legendary white boys. The point was as subtle as a sledgehammer: We're all the same under the skin.

Ideally, the stories all would've been subtly relevant to the real-life drama—with the emphasis on subtly.

Even more conveniently, the hoods went off with a vanful of attractive young women who just happened to stop by. So the biggest threat of part one vanished in part two...poof!

As Shane and his grandfather traveled the backroads—not the freeways, of course—I found the anonymous landscape irritating. As far as I can tell, they didn't pass anything recognizable—such as the Rocky Mountains—or name wherever they were. Would it have hurt the production to say they were passing through Nebraska or Colorado or wherever? To show a few roadsigns establishing their approximate location?

Are we supposed to believe he was so hungry he couldn't last another minute? And that they hadn't passed a single outpost of civilization—a home or ranch—in their trek cross-country? Even on horseback, wouldn't you follow the roads to avoid unexpected obstacles such as fences? Isn't wandering in the wilderness without food or water an obvious mistake?

The scene was inserted for comic relief, I guess, but instead it played as foolish nonsense. 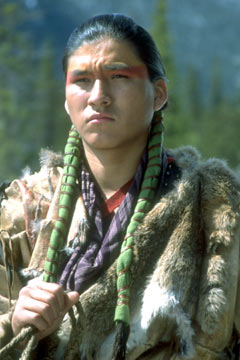 In short, it was all much too perfunctory.

The ending dissipated the drama that came earlier. In fact, there wasn't enough drama. The gang threat was muted and hard to take seriously...and other than that, there was only Shane acting grumpily. The story could've used another couple of subplots to create some suspense.

An award-winner
At the 12th annual First Americans in the Arts awards ceremony, held March 20 in Los Angeles, Dreamkeeper was the big winner. Eddie Spears (Shane), Delanna Studi (Talks a Lot), and Teneil Whiskey Jack (Quillwork Girl) all earned awards for their acting. Hallmark Entertainment and ABC received Trustee Awards for making and airing the mini-series.

Readers respond
"Dreamkeeper was really good...and you know...I don't care what non Indians think about the movie!"
"Maybe it takes being all/part Native to appreciate 'Dreamkeeper.'"