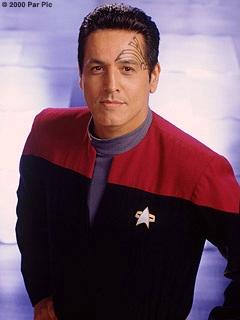 On UPN's Star Trek: Voyager, Robert Beltran played Chakotay, a Native American who attended Starfleet Academy before joining the rebel Maquis. The standard view is that Chakotay, the first continuing Native character in a Trek series, was an uplifting role model. "Chakotay is a passionate man who has earned Captain Janeway's respect as her friend and First Officer," Beltran once explained.

But Al Carroll (Mescalero Apache), a PhD student at Arizona State University, has another view. He dissected Chakotay's background in his thesis, "Depictions of Native Veterans in Fiction." Some excerpts:

Alas. Even the future's fictional Indians are stereotypical.

More on Chakotay's background
From StarTrek.com:

Needless to say, such things as medicine bundles and wheels aren't part of the traditional Maya culture. Instead, they're part of the New Age stereotype. Namely, that all Indian cultures embrace such things as vision quests, sweat lodges, animal totems, and spirit guides.

More on Chakotay the good Indian

Readers respond
"[T]he idea that US history and indian rights should be a focus on Voyager is as silly as having any black character dealing with slavery—in the 24th century."
"I can tell you that your article quoting [Robert Beltran] is completely wrong."
"Why aren't white characters ever referred to as stereotypical?"
"Some tribes allowed women to have vision quests. It depended on the tribe."