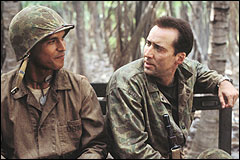 An expanded version of my Indian Comics Irregular essay Windtalkers:  No Guts, No Glory: 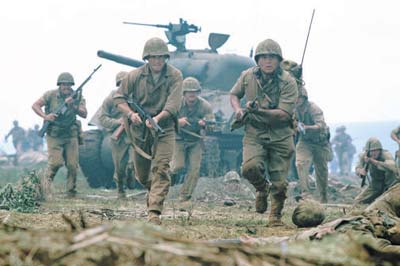 Protect the code, kill the codetalker? 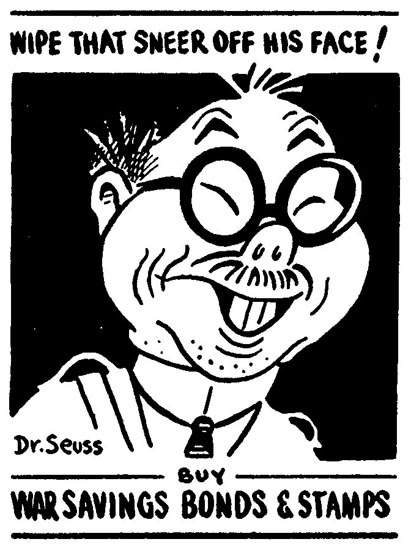 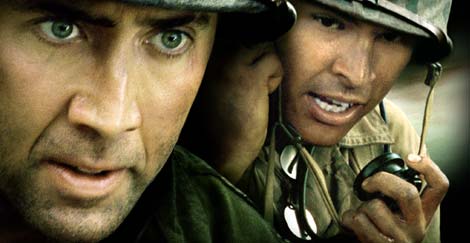 Rob's comment
For links to most of these reviews, visit Indianz.com.

I haven't seen Windtalkers yet, but not seeing a movie has never stopped me from commenting before.

Confirming that the movie is about white stars and a couple "other guys" is the Windtalkers events calendar, which lists the media appearances leading up to the movie's premiere. A tally of these appearances:

Final score:  Anglos 12, Natives 2. The "windtalkers" are outpublicized, 6 to 1, in a movie supposedly about them.

True, John Woo and Nicolas Cage spoke often about how the movie honors the codetalkers. And students who have never met an Indian—who think Indians are tomahawk-wielding savages in headdresses—"honor" them with their school mascots. To some of us, the parallels are clear.

Subliminal message?
Another point worth mentioning is how the visuals reinforce the film's message. Consider the newspaper ads. In one, Nicolas Cage's steely gaze dominates. We expect this strong, silent American to triumph over evil just like John Wayne did.

Behind him is Adam Beach, supposedly the movie's raison d'etre. Beach is calling for help while he glances at Cage. It's clear whom the real hero is: the great white hope who will save the day.

Every detail in this ad confirms the message. Cage's heavily masculine face is prominent, while Beach's more delicate features are obscured. Cage's eyes are big and glaring; Beach's are shadowed slits. Beach's mouth is open and his fingers visible, creating a subtle aura of femininity. (Many cultures would consider that good, but not ours.)

Our mythology exalts the doer above the talker and so does this ad. Even the name "windtalker" (not codetalker, the proper term) suggests someone whose words are empty or full of hot air. Compared to Cage, Beach is "all talk"—an insult to most Americans. He's a counterpoint to the true hero: the stalwart man of action.

Even the actors' names fit their assigned roles. Cage, the seething cauldron of restrained righteousness. Beach, the harmonious complement to Nature's power. A person in a cage is someone who acts. A person on a beach is someone who is acted upon. 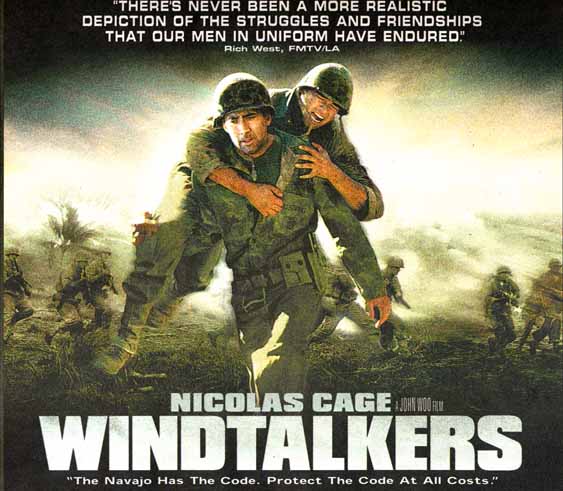 The message is even more explicit in another ad. Cage carries Beach from a war zone to safety. Cage has the same stony, implacable look, while Beach's eyes are shut and his mouth is gaping. He might be crying like a baby.

In our history books, saving and civilizing the world is America's duty. In this ad, Cage, the stoic adult, totes Beach, the mewling child, on his back. The Indian is literally the white man's burden.

So much for a century of progress, eh?

As for the movie's opening shot, it might've been interesting to start with a sweeping shot of Monument Valley...then sweep past it, past Shiprock, to some nondescript bus station in Gallup or wherever. That would allow the opening shot but make the point that it's hardly representative of the Navajo reservation. Paying homage to John Ford's stereotype of "foreign" Indian country isn't exactly a blessing.

Some Native viewers weren't too worried about historical accuracy. They were just glad to see themselves on the screen. This reflects the research showing that people don't want to be invisible, even if it means being misrepresented.

But there's some danger in this thinking. If Windtalkers does poorly—as it appears it will—a major studio may not make another codetalker movie for 50 years. One could argue that it's better to have no movie than a bad movie that ruins the market for Native subjects.

At best Windtalkers portrays Indians as Dances with Wolves did: positively but superficially. At worst it's another story of "exotic" Indians told from the white man's point of view. The definitive Native-themed movie remains to be made.

The real codetalker story (7/1/02)
Steve Russell adds his thoughts on what a real codetalkers story—a movie, novel, or comic book—might contain. Note the profound difference between a story told from the Anglo point of view and the Native point of view.

And from Steve's article for the Tulsa Law Review titled "Honor, Lone Wolf, and Talking to the Wind":

Sadly (for MGM), Windtalkers seems to be tanking at the box office. Is that just a coincidence? No, I don't think so. As I and others have noted, Multiculturalism Sells! in this new millennium.

MGM didn't "get it," but the Native version is far more interesting than watching Nicolas Cage grunt and grimace through another heavyhanded performance. This is a story that deserves to be told the right way.