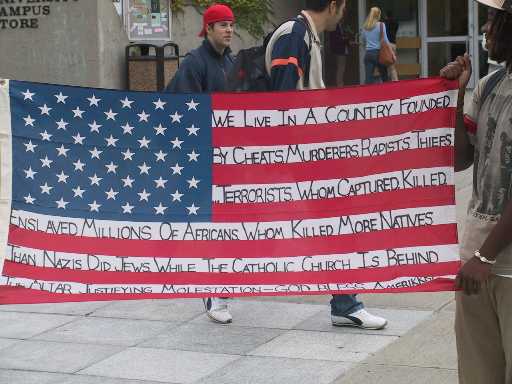 Rob's comment
This column may qualify as the racist column of the year. It's riddled with blatant, stupid, and ignorant lies. Among the worst:

Sabia has conveniently forgotten that Hitler and Stalin were among the products of Western civilization. As were the atomic bomb and global warming. The United States is responsible for the greatest single instant of mass killing: Hiroshima.

For a truer picture of Native vs. Western civilzation, go to This Ain't No Party:  a Columbus Day Rant.

Readers respond
"Mr. Sabia's diatribe was...no more or less bigoted than the leftists he was attacking."

Related links
Were the Aztecs murdering "animals"?
Indians as cannibals
The myth of Western superiority
Those evil European invaders
Native vs. non-Native Americans:  a summary