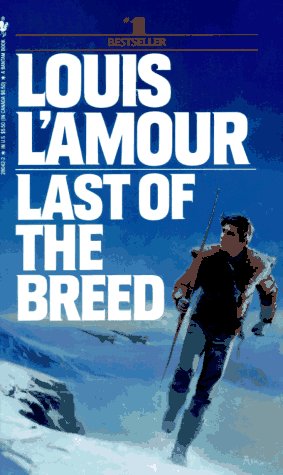 Correspondent Tom sent me a copy of L'Amour's Last of the Breed to read. It's about Joe Mack, a Lakota Sioux Air Force pilot who's shot down over Russia and sent to a concentration camp in Siberia.

Naturally, he escapes. The bulk of the story is about his fleeing cross-country to the Bering Strait and the US. As he travels, Mack feels himself reverting to the "savage" ways of his ancestors. He's content, he says, because savagery is his natural state.

My response to Tom
I read it. It was about on a par with L'Amour's The Haunted Mesa. Perhaps not quite as good. I give it a 7.0.

I hope this book isn't the source of your Indian knowledge and beliefs. However well L'Amour executed it, his whole concept is a stereotype. I'd guess almost no Indians consider themselves savages at heart. If anything, they think the opposite. Namely, that their ancestors had a humane, compassionate culture and that modern civilization is savage in comparison. (See a history of modern warfare for more details.)

Hmm. Nothing about savagery in this extended description of the traditional Indian character. Nothing even about being a warrior. It sounds a lot like a Boy Scout, which isn't surprising since Seton developed the Boy Scouts' philosophy.

L'Amour doesn't know Indians
Last of the Breed contains some outright falsehoods and many biased statements (as well as some genuine facts). Some paraphrased examples:

Of course, Indians wanted to win once they realized they were in a life-or-death battle against Euro-Americans. But traditionally speaking, conquering people wasn't their goal. Their battles often were limited to protecting territory or settling grudges.

L'Amour gets an extra demerit for Joe Mack's response to claims of American imperialism. To paraphrase, "My Sioux ancestors conquered people too." No Indian I know has ever made that comparison—has ever said minor territorial skirmishes were equivalent to modern wars against nations.

If anything, Indians think the opposite, again. Their wars of "conquest" were minor and that's what distinguishes them from Euro-Americans, who felt they had to conquer America from coast to coast and then keep going (Mexico, Hawaii, the Philippines, etc.). Indians are rightly proud for never killing people to impose their culture or religion.

Stay tuned...
Coincidentally, I plan to create a "last of the breed" Native superhero. The differences between her and Joe Mack should be instructive. Like most Indians today, she'll synthesize traditional and modern beliefs. The new won't be a veneer over the old.