The April 30 episode of South Park may be the most racist show I've ever seen on TV. To label it a hatchet job would be putting it mildly. Calling Indians everything from greedy to evil, it was an outright vilification.

Titled "Red Man's Greed," the show begins at the Three Feathers casino. The stereotypes come in a torrent. A teepee stands outside the building. The waitresses dress like Disney's Pocahontas. The chief wears a headdress and has a "funny" Indian name: Runs with the Premise. The blackjack dealer utters homilies such as: "May luck run through you like the spirit of the buffalo."

Things are no better in the casino's comedy club. The Indian comedian speaks in a slow, halting voice. An Indian drumbeat punctuates his punchline. The Indian audience laughs in a chant-like cadence. The closed captioning even identifies this as "Indian war chanting."

While the character Gerald gambles away his house ("Don't the Native Americans know he has nowhere else to go?" "They don't care") the tribe's chief and "elders" watch from above:

The Indians hatch a dastardly plot:

As they buy up all the property in town, the dialog makes the show's position clear:

The residents go to the casino to win enough money to buy back their town, but fail. Again, the show's stance is unmistakable:

A role-reversal satire?
Then the show morphs into a bizarre "satire" of Indian-Anglo relations. The Indians rub Chinese men on blankets to infect the blankets with SARS, then distribute them to South Park's resisters. Seeking a remedy, Stan goes to a "wise man" in a trailer park, who has him sniff paint thinner to induce a vision. The imagined cure works, reviving the dying citizens.

The chief's son comes down with SARS and the adversaries join to save him. But even as the "satire" continues, so do the insults and stereotypes. For instance, the medicine man who tries to help the boy is a classic "shaman"—half-naked and wearing a wolf's head. The slot machines are labeled with signs saying "Lotta Wampum" and "Big Heapum Jackpot." The show keeps belittling Indian culture while ostensibly criticizing the white man's greed.

The second-half satire may delude some into thinking South Park is pro-Indian. But the gratuitous insults and stereotypes have nothing to do with enhancing the satirical "message." In reality, the satire is the window dressing and the insults are the message. The creators have tacked on a happy ending to justify their obvious racism. 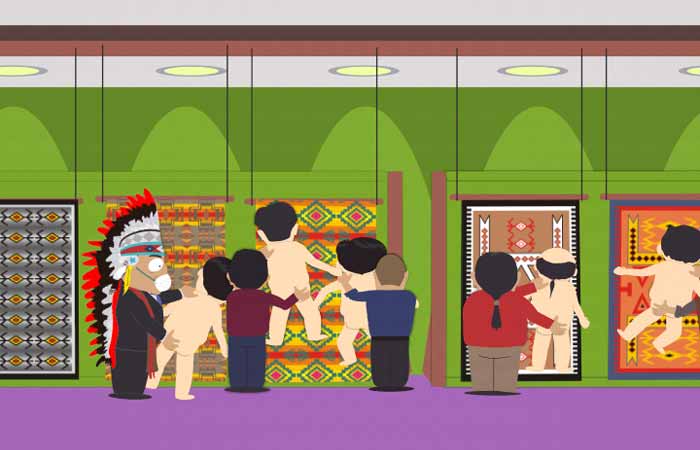 What would a reasonable person say?
If that isn't obvious, apply the same standard a court of law would apply: the "reasonable person" test. What would reasonable people who knew nothing about Indians conclude after watching this show? That Indians wear headdresses and live in teepees...speak slowly or in pseudo-spiritual cliches...and are rapacious foes of everything good and decent. The evil sneers and maniacal laughter—which, again, are totally unnecessary for the "satire"—make that crystal clear.

What percent of South Park fans know that Anglos supposedly infected blankets with smallpox to exterminate the Indians? What percent of that small percent understood this episode was a takeoff on that? It's likely the vast majority of viewers absorbed the show at face value. Indians are so cruel and depraved that they'd use biological warfare to enrich themselves.

A quote from an online forum shows at least one South Park fan didn't get the "satire." He was willing to equate Indians with the Hitler du jour:

How charming. Indians who are trying to better themselves just like other Americans are equivalent to a mass murderer. Are Steve Wynn, Donald Trump, MGM Grand, Harrah's, and other (white) casino operators also equivalent to mass murderers? (Well, maybe, in the Donald's case....)

Greedy then, greed now?
Compare all this with a previous view and you'll see not much has changed:

That Indians were good for nothing was the message of anti-Indian proselytizers such as General Philip Sheridan, Teddy Roosevelt, and Twain. It's South Park's message too. Yesterday's savage barbarian is today's greedy casino operator, but the Indians' alleged goal is the same. It's to subvert rationality, progress, and the American dream: the dream of reshaping the world to please Americans.

Two cars in every garage, a Starbucks on every corner, and an oil well in every field and stream. That's what mainstream American culture stands for and that's what traditional Indian culture stands against. As Horace Greeley wrote in 1860, "These people must die out—there is no help for them. God has given this earth to those who will subdue and cultivate it, and it is vain to struggle against His righteous decree."

"We" are the ones who are supposed to get rich by exploiting others, not "them." And certainly not those darn Indians, who keep getting in the way. Weren't they supposed to be dead and gone by now? Haven't we "honored" them enough by naming football teams, helicopters, and SUVs after them? Why don't they take the hint and head off to the happy hunting ground, so we can get on with the Wal-Martization of America?

South Park can pretend it's taking a pro-Indian position, but it doesn't say one positive thing about Indian people or culture. A satire is an exaggeration of the truth, not the negation of it. From the chief to the "wise man" in the trailer to the traditional medicine man, every Native or Native analogue is treated as a joke. The disdain for Indians is palpable.

South Park doesn't believe its "message," or it would find a way to make the Indians heroes. Instead, it makes them the villains, even while it's defending "their" right (actually, South Park's right) to preserve their homes. It's much like a civil-rights movie with white actors in the lead roles. Everything screams that white makes right.

Curiously, South Park presented a more positive message in its "Cherokee Hair Tampons" episode. Then it satirized anti-Indian attitudes without belittling Indians too. But that was a few years ago, before tribal casinos started getting bad press. These days it's open season on Indians, and South Park—proving how original it isn't—has hopped on the bandwagon.

P.S. If your first thought is "It's just a joke," see "It's Just a [Fill in the Blank]" for some second thoughts.

Readers respond
"South Park is famous for their stereotypical portrayals of other races. It isn't meant to be offensive, it's meant to be funny."