An expanded version of my Indian Comics Irregular essay Leaphorn and Chee Do Public TV:

PBS has broadcast an adaptation of the Tony Hillerman mystery Skinwalkers. It's the first American production in the formerly all-British "Mystery!" series. As the Milwaukee Journal Sentinel (11/22/02) explains:

Rob's review
My reaction to Skinwalkers: The above is all true. The movie dealt honestly with the Native characters and culture, which is still rare in the entertainment media. Nevertheless, I was somewhat disappointed. A few problems: 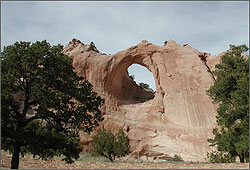 Although I didn't want to see the overused "mittens" of Monument Valley, the landscape seemed more like the generic Southwest than Dinetah, the Navajo homeland. I never had a good sense of where the characters were, which is unfortunate in a movie where place is important.

Further suggesting the problem, the PBS website for Skinwalkers uses a huge Saguaro cactus as a recurring motif. This cactus is a Southwest stereotype; it's basically not found on the Navajo rez.

In the books, Leaphorn and Chee sometimes do this literally: visualize or actually draw the links between the people involved in a case. If you have to draw a diagram to understand the characters' relationships, I'd say you have too many characters. In a book you can stop and reflect, at least. Not so in a movie.

Movies of Hillerman's books aren't necessarily the best way to introduce people to Native culture. Because they're character-driven, because there isn't a lot of action or visual dynamics, these stories don't scream to be made into movies. To me, they're meant to be novels, not films. 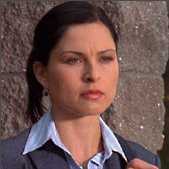 In contrast, Chee is the inexperienced cop who's unsure of himself and his direction. Part of him wants to emulate Leaphorn, the pragmatic professional, and part wants to learn the traditional medicine ways. Chee is as awed by the old investigator as he is by the Navajo mysteries:

If there's a theme to the series, it's whether Chee can reconcile the two opposing pulls: the modern and the ancient. Not until the most recent books does Chee seem comfortable with himself and his legendary superior.

Cheaphorn and Lee?
The movie almost reverses Leaphorn and Chee. As the Associated Press (11/19/02) notes:

So Leaphorn is a blustery, procedure-bound outsider who knows little about Navajo culture. Chee is the composed, confidant insider who has already balanced detective and healing work. Chee shows Leaphorn how to conduct investigations on the rez, not the other way around. It's almost painful to see Leaphorn falling off a ladder or dismissing a clue that might be crucial. 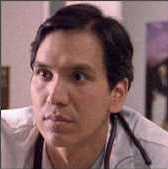 I'm not suggesting Hillerman's characters shouldn't be tampered with because they're as well conceived as Sherlock Holmes and Dr. Watson. But these characters aren't the Leaphorn and Chee I know. To stretch a metaphor, they're like skinwalkers—inhabiting the skins of Leaphorn and Chee, but acting like strangers.

And that's a shame. Now the relationship has been set for any future Hillerman movies on "Mystery!" Redford and company have botched the chemistry that made the Hillerman books a success.

Skinwalkers an improvement?
This is the second movie Robert Redford has made of a Hillerman book. As the LA Times (11/17/02) explains:

It may have been miscast and ill-conceived, but I consider Dark Wind the superior movie. It conveys the sweeping landscape, makes the plot manageable, and gets the main characters right. Check it out and see if you agree.