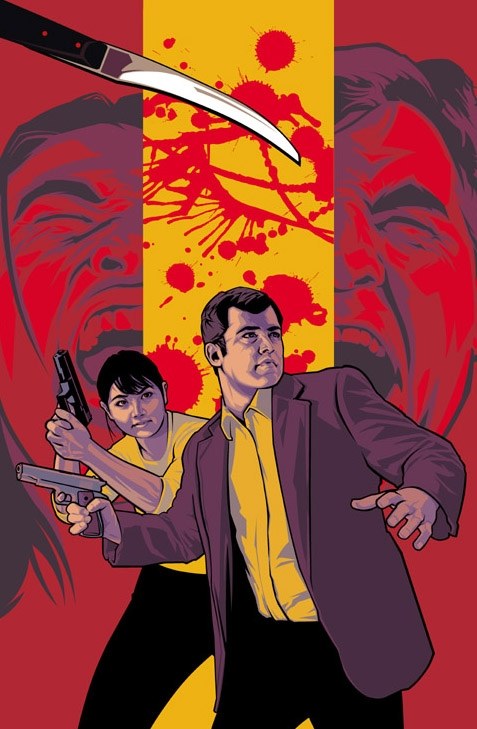 [SPOILER ALERT! Stop here if you haven't read the comic and plan to.]

Oni Press has published a four-issue comic-book series called SKINWALKER. In it, a white FBI agent goes rogue on the Navajo reservation. He learns the forbidden practice of skinwalking and duplicates it by artificial means (drugs, acupuncture). Killing people, he dons their skins and becomes them. Each new skin lasts only a while, so he must keep killing to stay alive.

The first issue offers a fine depiction of the Navajo reservation—one of the best I've seen in comics. Except for the clichéd opening shot of Monument Valley, the rendition of the landscape is appropriately nondescript—no buttes or cacti in the background. A smattering of Navajo words, concepts, and place names gives the story a genuine feel.

The characters, especially Ann Adakai, the Navajo policewoman, seem three-dimensional. In one scene, officer Adakai disagrees with a "peacemaking" ceremony used to resolve a juvenile delinquent's crime. In another, the delinquent's mother if whether Adakai is really Diné (Navajo). Adakai's relationship with visiting FBI agent ("feeb") Haworth is also realistically charged.

Issue #1 ends with the police finding a skinned body in a hogan. The story says little or nothing about Navajo beliefs once the cops determine the killer is a skinwalker. There are no phony ceremonies or mystical mumbo-jumbo.

The villain flees the rez and goes on a cross-country killing spree. The story turns into a typical cat-and-mouse game between the heroes and a Jack the Ripper-style chameleon who could be anyone. The ending is anti-climactic.

Are taboos broken?
The Navajo have a strong taboo against death and dead bodies. The gruesome closeup of the skinned body arguably violates this taboo. Does SKINWALKER show an authentic response to this?

As Tony Hillerman wrote about a similar situation in his book The First Eagle, "It would require at least a sweat bath and, more properly, a curing ceremony to restore the violators of such taboos to hozho." Nothing like that happens in the comics.

Perhaps more important, the whole subject of skinwalkers is off-limits to many Navajos. But SKINWALKER has an Anglo, not a Diné, becoming a skinwalker by artificial, not natural, means. That confounds the question.

I asked my correspondents what they thought of this gimmick. Some replies:

There you have it. The answer is a definite maybe.

The series' worst problem may be its washed-out printing and microscopic lettering. These make the comics difficult to read. That's too bad, since the gray-toned black-and-white art is otherwise effective.

If you're interested in Native-themed comic books, give SKINWALKER a look.

The problem with depicting taboos
Playing with taboos is fraught with moral jeopardy. So is rationalizing it.

You could depict a criminal violating any Native taboo—impersonating a kachina (as in Marvel's NFL SUPERPRO #6), casing a kiva's interior (as in a problematical Widget cartoon), or participating in a Sun Dance—then excuse the depiction. "The character should've known what he did was wrong, but he's a criminal, so what can you expect? Yes, we showed him violating the taboo, but we said the criminal was wrong, so we did our duty. We acted responsibly."

No, not really. That the characters and the comic take a stance against the behavior doesn't excuse the creators for portraying that behavior. You can depict any transgression—murder, rape, etc.—in such detail that the question becomes whether you're condemning it or exploiting it. Most media outlets refused to show the Daniel Pearl decapitation video for precisely that reason.

Readers of SKINWALKER can decide for themselves whether the series violates any taboos.