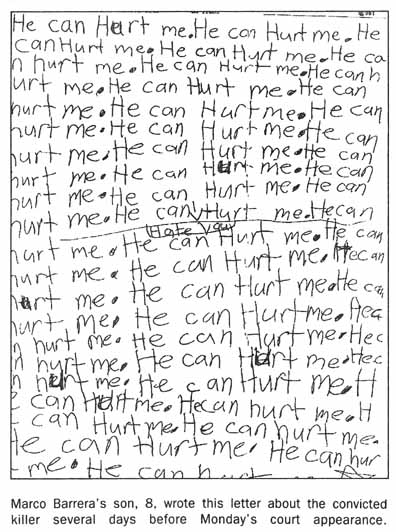 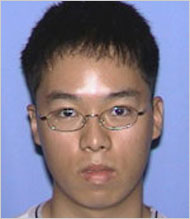 Cho a typical shooter
From the LA Times:

About the only difference between Cho and a typical shooter is that Cho wasn't a white boy. But he was Asian, a "model minority." He was under intense pressure to be popular and successful just like his white peers.

And the winner is...
Which risk factors are most important in causing shooting rampages? From a letter to the LA Times, 3/24/01:

Is that your final answer? Yes, we have a winner. Ding-ding-ding!

As Kopf so rightly says, the solution is to tackle the cultural bias, the guns, and the media simultaneously. Pick your target, take aim, and fire (and note the violent imagery we use routinely). Stop denying the problems and start solving them.

And note the recommendation of one expert quoted in Mestel's article:

So the solution is to implement specific programs that work to handle particular kids at risk. And to address societal problems in general to change our cultural expectations. In other words, the solution is to implement the Democratic Party agenda, since that's what Democrats call for. (In terms of government, the answer is to rightsize it, not upsize or downsize it.)

Don't ignore the media
I'm tempted to highlight all the factors the media can contribute to. Among them are delinquency, antisocial behavior, and aggression. The direct harm caused by media violence isn't the only influence we may attribute to the media, by far.

To summarize the articles' conclusions:  Forget silly conservative "solutions" like "family values," "just say no," or posting the Ten Commandments. Try real solutions like those advocated by the people who have studied the problem. But don't just throw money or resources at troubled youths. Use targeted government programs that have proved to be effective.

Even if we focus on broad problems like poverty, let's not ignore the role of cultural values. Other countries have much more poverty but much less violence. Our culture not only tolerates poverty and poor health care, it encourages high expectations. Americans have a sense of entitlement: work hard, play fair, and we shall achieve the American Dream.

And when that doesn't happen, as it often doesn't, we don't do as other cultures do. We don't wrap people in a warm cocoon of compassion and community. We tell people they're losers who didn't try hard enough. We leave them at home with a gun and a training manual (aka a violent movie, video game, or PUNISHER comic) and tell them to solve their own problems.

Guess what solutions they come up with? Check your local listings for the next shooting by a distraught student, boyfriend, postal worker, day trader, or white supremacist. Film and hand-wringing at 11.

As I've said many times, media violence generally doesn't cause real violence. Nor does the availability of guns. Not directly, anyway. What these conditions do is fuel the violent rage so evident in our culture. The violent rage that comes from living in a society that advocates the American Dream but doesn't deliver it.

Media violence and guns contribute to the problem, in other words, not to the solution. As part of the problem, they deserve our attention along with the inadequate social programs. Again, we have a good idea what works, if only we commit ourselves to doing it.

Along with these particular problems, our overall cultural mindset also deserves attention. As noted above, weak social ties and antisocial behavior are strong indicators of trouble. Our culture lacks human bonds because it emphasizes the individual as solitary gunslinger and society as a hostile frontier.

This mindset is a much tougher nut to crack, but it's not impossible. Change can happen easily sometimes, even on a national scale. If Nazi Germany, imperial Japan, communist Russia and Eastern Europe, apartheid South Africa, and autocratic Mexico can transform themselves in a single generation, so can the United States.