A self-proclaimed warrior
Pro-gun arguments are legion. Often they amount to little more than paeans to the liberty-loving gun nut. You know, the last bastion of goodness who stands alone against the evil of terrorists, commies, one-worlders, femi-nazis, and other liberals.

Native Americans have arguably experienced more of this patriotic gunfire than any other group of Americans. What's interesting is that despite being victimized by "warriors," some Indians still perpetuate the warrior mystique. The following is an example:

Rob's reply
Let's deconstruct this article and see what it tells us about men and warriors and guns.

>> Long ago, the government took away the Indian's weapons and put him on reservations. That is history. <<

Long ago pioneers, homesteaders, and soldiers used guns to force Indians onto reservations. The government took the Indians' guns away while it corralled them and, especially, after it finished corralling them. The Indians' guns weren't enough to prevent this tragedy.

That's history, not Yeagley's phony claim that removing the Indians' guns caused their confinement. Anglos with guns overwhelmed Indians with guns, then corralled them and removed their weapons.

>> They say they're trying to stop crime. But the more gun laws they pass, the more crime we get. <<

We can dismiss this claim summarily. Overall, crime rates have dropped for the last decade. If we're passing more gun laws, they seem to be doing the job.

Here are a few more egregious claims like Yeagley's:

None of these linkages is provable. In fact, no linkage is provable when you're dealing with the large-scale chaos of reality. Unless you confine it to a lab, a real-world situation has too many variables to isolate one and say it causes another.

Do gun control laws reduce crime? Does gun ownership reduce crime? You might be able to generate evidence for either claim in a controlled experiment. But in complex and multifaceted reality? Fuhgeddaboudit.

Here's more on the research on gun control laws. Note that even if California's results are valid, the expert doesn't expect one law to reduce crime singlehandedly. From the LA Times, 2/28/01:

Note that proving a certain law has a certain effect is difficult. But a "gun society" is more a philosophical choice than something we need prove is good or bad. Do we want to live in a culture where people think violence is good and aggression is better? Where we admire the biggest and "baddest" guy as the ultimate role model?

We choose to inspect food for harmful bacteria or drugs for harmful effects. We insist home and car manufacturers meet safety standards. We don't do these things because someone has proved them to be statistically sound. We do them because we value people's lives more than some corporation's profits. It's a moral choice, not a scientific one.

Gun control is the same idea. Americans are demanding we curtail our violent gun culture regardless of the statistics. If people feel safer because guns are less available, that's reason enough to pass gun controls.

Like most people, I suspect crime rates will decline as we make it harder for people who shouldn't have guns to get them. Countries with tough gun laws offer evidence of this. But we don't have to prove this case, any more than we have to prove seat belt laws will save X number of lives. In a democracy, the public can do whatever it wants as long as it's consistent with the Constitution.

A hundred years ago, few people had guns. It's a myth that most Americans have always owned guns. See The Myth of American Self-Reliance for more information.

A hundred years ago, we may not have had much crime, but we did have women and children battered...blacks lynched...Indians massacred. Would gun laws have prevented these crimes? It's impossible to say, but Yeagley hasn't even considered the possibility. His argument is lacking.

Why pursue gun control?
>> In his book, More Guns, Less Crime, Yale Law School economist John Lott shows that, across the United States, over an 18-year period, "states experiencing the greatest reductions in crime are also the ones with the fastest growing percentages of gun ownership." <<

Critics have slammed Lott's research for its methodological flaws. Among other shortcomings, it used arrests—not convictions—as a measure of crime rates. As one may imagine, arrest rates can change for a number of reasons having nothing to do with gun availability. Demographics, the economy, and police methods are just some of the variables.

Here's an example of what critics say about Lott's work:

So Lott's gun research is suspect at best. As you might expect from someone who's an economist, not a criminologist. A right-wing economist, that is, judging by how his "research" always upholds the conservative position on any issue.

In short, Lott isn't close to being the final word on the subject of gun control.

>> So why does the government keep pushing gun control? <<

Uh, because it works? See the latest studies on gun control for evidence of that.

It's enough that the people who elected the government want it. A better question is why gun nuts keep pushing guns against the people's wishes.

If this is true, then so what? What's Yeagley's point, exactly? I don't see any problems here. If "the government" takes anybody's guns, it's because the American people are trying to help themselves. That's their right under the Constitution.

>> Weapons are an integral part of our culture. In Indian country, it's taken for granted that everyone shoots and hunts. <<

Maybe so, but this is recognizing the gun as a tool, not as a weapon. The dictionary defines "weapon" as "an instrument of offensive or defensive combat." Unless Bambi's mother puts up one heckuva fight, we're talking about two different things. Hunting is killing for food, not defending one's home or culture.

>> In modern America, women seem to have turned against their own men over the gun issue, judging by the polls and the Million Mom March. << 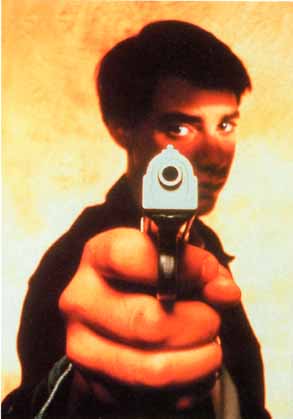 Right, which is why Yeagley's claim that "the government" is out to take his weapon is another half-truth. In this case the government reflects the will of the American people, who support sensible gun controls. It's called majority rule, and if Yeagley doesn't like it, he can go back where he came from. (Just kidding, of course.)

And don't get me started on the Second Amendment. The courts have ruled consistently that it does not permit an unqualified right to bear arms. The amendment itself is qualified by the phrase "a well-regulated militia." This phrase explicitly tells us the Constitution permits armed Americans (i.e., militias) to be well-regulated.

The right to bear arms shall not be infringed...as long as militias are well-regulated. Or to translate for those who aren't constitutional scholars, the guv'mint can regulate your guns but not take them away.

Government in danger of disappearing?
>> They think the government will always be there to defend them from enemies and criminals. <<

Is the US government in some sort of danger? I hadn't heard. With the USSR defunct and China still a Third-World country, what force could possibly threaten the United States government? Martians?

Maybe Yeagley was thinking of anti-Americans like Saddam Hussein and Osama bin Laden. On 9/11/01, terrorists managed to kill 3,000 Americans after years of planning. Roughly the same number die of asthma every year. Does asthma threaten the US government?

Hearing a gun supporter worrying about our government being too weak and powerless is a real side-splitter. These people bitch and moan when government is too big...and also when it may shrink too small. Apparently these people have no agenda except to bitch and moan.

>> I'm glad the NRA is out there spreading this message. <<

I'm sorry the NRA is out there spreading this manure. I hope I've highlighted its foolishness. What America doesn't need is more people touting guns as the solution.

In short, there's nothing to be scared of here, folks. Give Yeagley's screed the respect it deserves and laugh out loud.