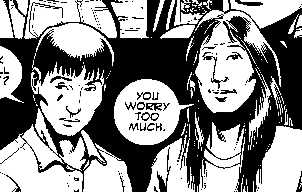 As Mitroff noted, he's using school violence as an example. The same thinking applies to adult shootings, education reform, energy shortages, AIDS, poverty, world hunger, or global warming. With problems that are large, complex, and diffuse, no one will hand you an envelope and say, "What's written inside will solve the problem." Many factors contribute to such problems, so to address them, we must tackle the factors without perfect information now.

Violence everywhere = do nothing?
Regarding media violence, movie producer Irwin Winkler offered the typical Hollywood excuses that amounted to "other factors are more responsible than we are for the tragedies" or "we are merely a convenient whipping-boy, etc." A few letters to the editor neatly dismissed Winkler's views. From the LA Times, 5/4/99:

The easiest thing to do
One more point. Winkler said the easiest thing is to target one group. No, the easiest thing is to utter a few vacuous sentences targeting no groups, then go home to your million-dollar mansion and plot your next multimillion-dollar movie that will inculcate cultural values in millions of viewers. To use myself as a counterexample, I'm not only pointing fingers at people, I'm also creating a permanent archive of information on my website and publishing fiction I hope will make a difference. What's Winkler doing to solve the problem he acknowledges?

To be fair, he's made some good movies: Rocky, Raging Bull, The Right Stuff, and Goodfellas. But even here we see an interesting pattern. All these movies embody a macho sensibility. They tell us that being tough, strong, and violent is the way to deal with life. None suggest being small, sweet, or sensitive (a la Snow White or Dorothy of Oz) as a model to emulate.

Consider Rocky. Rocky Balboa wants to keep fighting and his girlfriend Adrian wants him to stop. Guess whose view carries the day. "Yo, Adrian, I'm gonna keep pounding my head against their fists until I'm too brain-damaged to continue."

That's pure Americana—what other country makes so many boxing movies?—and it shows how pervasive the problem is. From High Noon to Star Wars to Gladiator, many of our best movies feature violence. Their message is that people should fight rather than switch (to a safer and saner solution).