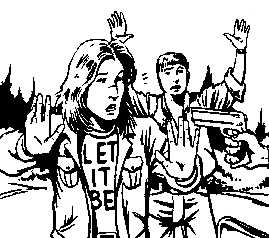 A little history
An excerpt from a book review of American Skin: Pop Culture, Big Business, and the End of White America by Leon E. Wynter. In the LA Times, 9/2/02:

Multiculturalism today
From the LA Times, 7/2/01:

Not quite that simple
A letter to the editor puts this article's rosy talk of a colorblind society into perspective. From the LA Times, 7/7/01:

Hollywood finally catching on
From the LA Times, 7/22/01:

Comment:  When will comic books, perhaps the most trailing-edge entertainment industry of all, get the message? Recycling old myths—ASTRO CITY, KINGDOM COME, EARTH X, any Batman or Spider-Man or X-Men spinoff—rather than creating new myths is what comics do best. And of course the old myths usually star white American men.

Meanwhile, multiculturalism is selling like hotcakes in related media: movies, TV, and music. When oh when will comics catch on?

Studios still don't get it
From the LA Times:

Multiculturalism in children's books
From the Chicago Tribune, 12/2/01:

Related links
PEACE PARTY marketing data
Why write about Native Americans?
Some thoughts on minority comics
The future of comics