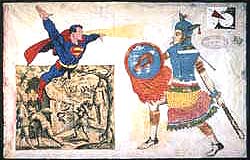 Rob's comment
Note the many references to pop cultural icons: Shangri-La, Superman, Star Wars, etc. They show how the myths of the "ancients" and present-day myth-making—books, movies, TV, cartoons, comics, etc.—are intertwined in people's thinking. Modern media forms are essentially updates of the age-old tradition of storytelling around a campfire.

Here's an expanded version of my Indian Comics Irregular essay Superman vs. the Mexica:

In his paintings, Chicano artist Enrique Chagoya juxtaposes pop cultural references with imagery from pre-Columbian and colonial Mexican sources. In particular, he uses comic book and cartoon characters: Superman, Spider-Man, even Mickey Mouse. The result is a revealing clash of titans.

A museum website describes Chagoya's 1994 painting Uprising of the Spirit:

Chagoya says he's not sure what his artwork means, but it seems clear to me. Superman flies from an old drawing showing Europeans burning a house with its victims inside. His super-breath could've put out the fire; his heat vision could've started it. Now Superman faces the Mexica king in a grudge match between Western imperialism and indigenous resistance. Each side's ultimate warrior is ready to fight for the Mexican—and the world's?—soul.

Even the choice of weapons is perfect. The Indian king uses sword and shield made of bone and hide. The American hero uses unstoppable radioactive rays. In small doses these rays reveal hidden danger; in large doses they cause cancer. 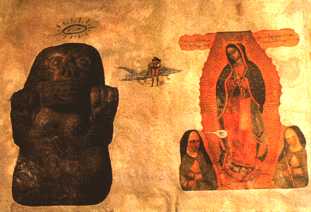 A panel of another Chagoya work, Insulae Canibalium (Cannibal Island), is even more suggestive. On the left is a large image of the Aztec goddess Cihuateto—a woman with a skull head. On the right is an equally large image of the Virgin of Guadalupe, with two nuns at her feet. One nun has a word balloon saying "Beat you." In the middle is the tiny figure of Wonder Woman standing before her robot plane, hands on hips, looking confident.

Nature's twin extremes—death and life—loom over the Amazon warrior. She's bold and fearless, but doesn't have a clue about the powerful forces around her. Like other Western figures, she'll tackle problems with strength and technology while ignoring the human and spiritual dimensions.

(For those who don't know, the Virgin of Guadalupe is revered by Mexico's Indian people as one of their own. They've incorporated her into their pantheon, making her an indigenous goddess as well as mother of the Christian God. Wonder Woman is closely linked to Greek goddesses such as Athena, Aphrodite, and Hera. Even Chagoya may not know she was briefly a real goddess in her comic.)

The battle lines are drawn: A Greek/Western/American goddess vs. two Mexican/indigenous/earth goddesses. The nun makes it plain this is a fight for supremacy, not merely a staring contest, when she utters the memorable "Beat you." Judging by their relative proportions, the indigenous goddesses have the superior position. Their beliefs and values will surely win.

Elsewhere in Cannibal Island, Chagoya places Superman, Batman, and Spider-Man on the perimeter, reacting to indigenous images. They're confused, surprised, or impressed by the wonders they see. Though they're paragons of Western culture, they've found something beyond their ken.

In short, the West doesn't have all the answers, though it would like to think otherwise. The ancient, timeless traditions of Native cultures are deep with meaning. As Oren R. Lyons (Onandaga) put it in Exiled in the Land of the Free, the history of the Americas is like an iceberg:

Or as Chief Seattle reportedly said to Governor Stevens in 1855:

Chagoya renders the invisible visible with his colorful, graphic icons. His choice of comic book characters is inspired. As I've said before, the superhero is a mythological avatar for today's America. He's an update of previous American heroes: the explorer, the pioneer, the cowboy (John Wayne).

The goal of these heroes was and is to spread Western civilization, establish law and order, and vanquish troublemakers in the way. In the cowboy's case, that meant Indians, rustlers, and other varmints. In Superman's case it means Luthor, Brainiac, and Doomsday. The method used is brute force—or as Teddy Roosevelt put it, "It is only the warlike power of a civilized people that can give peace to the world."

In comic books, heroes always win. In history books, they often lose. As in Greek plays, enlightenment comes from tragic loss and true humility. It's a lesson Jesus, Buddha, and Coyote taught but many have yet to learn.

Chagoya is urging us to recognize and reconsider our cultural conflicts. Can the techno-warrior really defeat, well, God, Mother Nature, and their representatives? The Bible says the meek shall inherit the earth; the Ghost Dancers believed "we shall live again." The question is whether we can acknowledge and adopt these attitudes before "progress" destroys us all.

Readers respond
"[T]he Latino culture is still there and intact, with the same Aztlan spirit or mindset...."