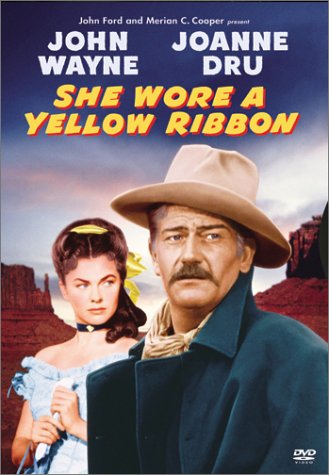 From watching old Westerns, I'm getting the impression John Wayne didn't appear in that many movies with Indians or kill that many of them. Case in point: She Wore a Yellow Ribbon.

This movie is one of John Ford's trilogy of movies about the US Cavalry. Wayne stars as Captain Brittles, the leader of a remote Army fort. He's a lifelong Army man about to retire. But before he does, he has one last mission: to escort a young lady through Indian territory to catch a stagecoach.

Brittles actually acts decently toward the Indians around the fort. He's just doing his job, which is to keep the peace and avoid hostilities. But even if Brittles doesn't take an anti-Indian stand, the movie does. Ford clearly is on the side of the white man.

The stage is set in the opening monologue:

This treats the problem as solely one of the Indians rebelling against their fate. Nothing is said about the white man's role in antagonizing them. As far as this movie is concerned, Indians are born angry and contentious.

Note also that it refers to Custer's Last Stand as a massacre. Again, there's no mention of the fact that Custer launched an unprovoked attack against an Indian village at rest. His death was a massacre only in the sense that any losing side in a bloody battle gets massacred.

True, people at the time called the event a massacre, but this movie debuted in 1949, 73 years later. That's enough time for people to begin revising history.

This "triumphalist" attitude, as one a website called it, continues in subsequent lines about the military. For instance:

The setting
She Wore a Yellow Ribbon famously takes place in Monument Valley. It won an Oscar—the only one it received—for its beautiful cinematography. But the scenery is one of the biggest problems in the movie. It ushers in a host of laughable stereotypes.

I guess the movie is supposed to take place in the north-central Plains: South Dakota, Wyoming, or Nebraska. But that region tends to be flat and empty, which isn't very photogenic. So the setting has been transplanted to southern Utah.

Even if you don't know Monument Valley's location, you'd know this wasn't the Great Plains. It's a tableland, the opposite of a plain. A cursory knowledge of geography would tell you it can be located only in the Arizona-Utah area.

The plot, part 1 [spoiler alert]
Brittles and company are wary of a party of Cheyenne Dog Soldiers raiding the territory. They first spot a band of Arapahos moving their whole village. Give them a wide berth, Brittles says.

A group of Indian warriors on horseback attacks. "Shoot over their heads, men," say Brittles. "Drive them back."

More Indian warriors attack the homestead where the stagecoach stops. They kill the homeowners. This effectively eliminates the only means of escape for the whites in the area. But the Cavalry merely charges and drives the Indians off. No bloody battles here.

So far, the Indians have merely been vicious. But Ford shows us that they're cruel as well. Rynders, the local Indian agent, has arranged a meeting between two gunrunners and an Indian named Red Shirt. The Indians kill the gunrunners, take their rifles, and throw Rynders into the fire repeatedly.

Brittles only watches this. He doesn't intervene. He must think this is a just punishment for siding against the US.

Think about this scene a moment. An Indian agent is arming Indians against his fellow white men. In reality, Indian agents cheated Indians to help local governments and businesses. But in Ford's fairy-tale world, the problem is one bad man, not the whole system. And the bad man is tortured for daring to take the Indians' side.

Next up is an interlude featuring the drunken Sergeant Quincannon. Played for pure comic relief, Quincannon fights 7-8 soldiers who want to lock him up for misconduct. Like the equally misguided interlude in Cheyenne Autumn, this interlude stops She Wore a Yellow Ribbon dead in its tracks. Whatever narrative drive or momentum the movie has achieved is completely lost.

There's a subtext of "boys will be boys" here. The interlude further humanizes the soldiers, makes them seem more sympathetic. Meanwhile, no Indians have received any face time. They're faceless enemies.

Meanwhile, Captain Brittles's last day has arrived. He packs up and sets off for California.

The plot, part 2 [spoiler alert]
Lest viewers have forgotten how terrible the Indians are, the second half opens with a reminder:

Yes, the drumbeats sure do echo. The scene is drenched with Indian war music, especially the pounding tom-toms. The only thing missing is Indians whooping and dancing around a campfire.

But Brittles hasn't left after all. He rejoins his troops and plots how to stop the brewing war. Amazingly, his solution is to ride with his second-in-command Tyree into the Indian village.

Why the Indians don't kill him on sight him is a mystery. Apparently, the the danger is almost nonexistent and the soldiers were worrying about nothing. A blind man could ridden into the camp and parlayed with the chief.

This chief, Pony That Walks, is an old friend of Brittles. He's the only Indian shown as an individual with a personality. Unfortunately, Pony talks like a latter-day Tonto. And he announces that he's a Christian with a rousing "hallelujah."

Like Karl Mays's Winnetou, another pagan turned Christian, he's the white man's version of a good Indian. Ford can't admit that a non-Western "savage" could be the equal of a man like John Wayne. Only Western civilization has made Pony, well, civilized.

"I come in peace," says Brittles. He's all business, while Pony That Walks wastes time on frivolities. They both want to end the war, they agree, but Pony says he can't control the young men under him. All he can suggest is that the two of them give up and go hunting.

Never fear. Brittles is smarter than the average Indian. As midnight on his last day approaches, Brittles stampedes the Indians' horses. Amazingly, they didn't think to tie up their animals or post guards. Without their mounts, the hostiles are helpless. They'll have to return to their reservation with Brittles's men behind them, herding them like stray cattle.

The message
Let's review. The hostile Indians have killed a handful of settlers and gunrunners. But they're almost comically inept, unable to kill a single man with Brittles. Brittles runs them off easily with their tails between their legs.

Moral of the story? The white man's decency, morality, and fair play beat the Indians' treachery and savagery. While Indians pillage and massacre, soldiers fight only defensively and with restraint. Without killing a single Indian, Brittles has made the West safe for democracy and maidenly virtue.

The final scene cements the feeling of Manifest Destiny. It shows troops marching to martial music accompanied by the following words:

Amusingly, the soldiers are carrying a flag with 48 stars. Perhaps Ford made this "mistake" on purpose. After all, his message is that the United States is triumphant now and forever, not just in the past.

Minor gaffes
Early on, Fort Starke is shown near the famous Mitten buttes. But when Captain Tyree flees from the Indians, he stops in front of the same buttes. The fort should be only 100 yards or so away, so what's he waiting for? Why doesn't he just ride into the fort?

Many of the Indians wear strange orange shirts. They look like highway workers in safety vests or swimmers in life preservers. This isn't a custom I've ever seen or heard of. I guess Ford wanted them to stand out from the landscape. Can't have those anonymous brown skins blending in with the anonymous brown backgrounds, can we?

Most bizarrely, in the Indian village, some women beat on what looks like a concrete pipe with sticks. A concrete pipe in the old West? I guess it's possible, since concrete was perfected in 1849, but I wouldn't bet on it.

Performance notes
One commenter on IMDB.com credits Wayne with doing a good job: "John Wayne gives a top notch performance in what is obviously one of the first out and out serious roles that Ford gave him, his aging Captain Nathan Brittles requires him to put in a very human fallible performance and he achieves this in spades, a believable leader ruing the calling of time on his career in the service." But to me he seems like the typical stiff John Wayne. He talks in his usual stilted drawl when a natural cadence would be better.

I expected one of the young soldiers fighting over Miss Dandridge to get killed. That would've added some tragic weight to She Wore a Yellow Ribbon. But none of the men with Wayne dies. This movie is more like a child's game of toy soldiers than a serious study of history.

Let's see: The Monument Valley setting is a joke, Wayne's performance is wooden, no one of consequence dies, and Brittles defeats the Indians through a cheat of a strategm (his free pass through the Indian camp for scouting purposes). Rob's rating: 6.5 of 10.

Note: I saw Captain Brittles' cabin at the Goulding's Lodge in Monument Valley. I stood in the same places John Wayne stood. You can see my pictures of this locale here.