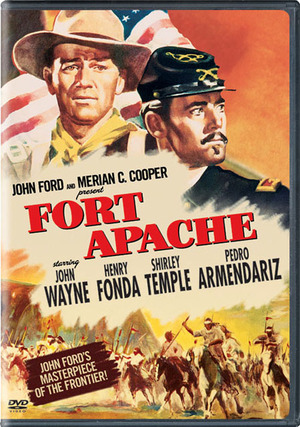 A review of Fort Apache, a key John Ford/John Wayne collaboration. First, a couple of postings sum up the basic plot and themes.

Dialog establishes themes
Let's look at the key bits of dialog in Fort Apache—the ones that establish the movie's themes.

An initial exchange sets up the basic conflict between Owen ("I'm not a martinet") Thursday the martinet and Kirby York the good soldier:

The characters waste the first 49 minutes of the movie flirting, dancing, drinking, and horsing around (literally fooling around with horses). Finally, Lt. O'Rourke and Miss Thursday spot the smoke from a burning wagon. Oh, no...the Apaches are on the warpath!

The soldiers head to the local government agent, Meachum, to see what's happening. Meachum plays dumb but York knows him too well. 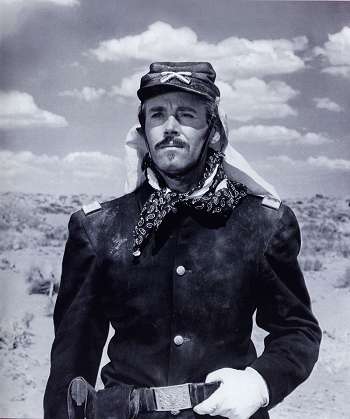 Note a couple things here. One, both York and Thursday agree that Meachum and other corrupt agents are the problem. Neither one indicts the US government, the US army, or the American public. If not for a few bad apples, there'd be no problem with the Indians: no broken treaties, no Indian wars, no genocide.

Two, the wagon supposedly was burned by a small band of renegade Apaches. These renegades are quicky forgotten as the soldiers' attention turns to Cochise.

Cochise isn't leading the renegades. He has merely fled the reservation to Mexico. In fact, he hasn't done anything warlike or aggressive at all. The bloodshed is caused solely by the renegades.

But juxtaposing them creates the illusion that Cochise is somehow responsible. Thursday concludes that all Indians are bad because no one makes a clearcut distinction between the good and bad ones. Just as the US invaded Iraq after being attacked by Afghanistan-based terrorists, Thursday targets Cochise after a renegade attack.

It's as if the movie wants to have it both ways. Cochise is honorable but the renegades are killers. Since Cochise can't control his own warriors, we have to lock them all up on a reservation. It's not fair to the Indians, but what can you do? The savages need parental supervision like naughty children because they're, well, savages and children. 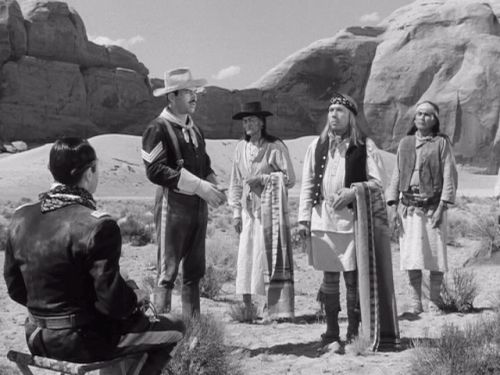 Thursday leads a charge against the Apaches and York can do nothing to stop him. The result is a Little Bighorn-like debacle. So along with a few bad apples as government agents, we have a few bad apples among the Army's officers. Again, York and the regular soldiers are salts of the earth, as humble and honest as the day is long. They'd never do anything bad to the Indians unless ordered to.

What it means
We're left with a confounding series of impressions. It's more complex than "Americans good, Indians bad." But it's a mixed message at best.

As opponents, Indians are savage and fierce but also honorable and noble. But they have no history, culture, or religion. Except for a leader or two, they're anonymous warriors. All they ever do is ride across the landscape or stand among the rocks, so we don't even know if they have homes or families.

The Indians have gotten a raw deal, but it's not clear who or what is responsible. Most of the blame goes to a few government agents who sell them whiskey and guns and a few officers who don't respect their autonomy. The American government and culture are decidely not to blame. Most Americans are assumed to be John Wayne-like in their compassion for the poor Indians.

As Slotkin said, the movie celebrates the American victory over the Indians while superficially critiquing it. The virtue of the American military is the final message on the screen, the one viewers are supposed to take away with them. The Indians are little more than plot devices to prove America is a benevolent giant. Like police officers, we don't do anything except keep the peace.

Ford's position on manifest destiny mirrors the neocon position on Bush's invasion of Iraq. According to the neocons, toppling Saddam was the right thing to do. If the White House had planned better and led more competently, the war would've been a resounding success instead of a muddled quagmire. But there's no question we had to subdue the brown-skins in Iraq like we did the brown-skins in the American West. Because a terrorist is just a savage by another name. 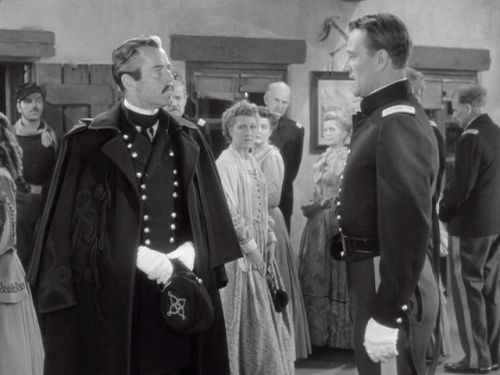 Because of the crackling conflict between Thursday and York, and the expression of some sympathy toward the Apaches, Fort Apache is better than some of the Westerns I've seen. If the first half weren't so leisurely, it might've been a fine movie. Rob's rating: 7.5 of 10.