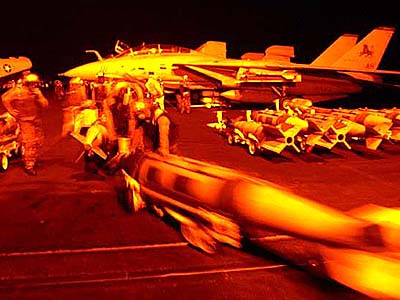 We've heard Bush and other leaders talk about how America is strong. "Our country is strong," Dubya said in his first speech after the 9/11 attacks. In girding us for war, he might very well have quoted these famous lines on being strong in conflict:

The irony is that these lines come from a rabidly antiwar poem, War Song, by John Davidson (1857-1909). The full first stanza is:

Unhallowed and sung in anguish, this song can't be good. It isn't. The next stanza identifies the "we" who are singing so gloomily:

So "we" are soldiers. And what are "we" singing about? War, of course. War, glorious war, described as

So "we" are "licensed murderers," glorying in the "blood-bath of the race." And we also sing of our swiftness and strength, which win us races and battles. Here's more on who "we," the swift and strong, are:

So our might has made us "spell-bound." Or as another line puts it, "Like zanies rigged, and chained." We're drugged by "lust for havoc," lit by "a blood-red blaze of wrath," to quote more lines. If we ever had a conscience, it's gone, destroyed by our obsession with destruction. 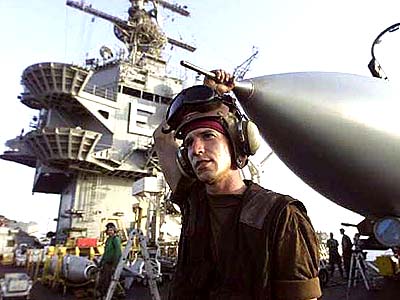 And our strength has made us "huge brutes in dumb distress." Imagine a big, blundering war machine, stumbling about, lost. Imagine the USA in Vietnam or the USSR in Afghanistan, if that helps.

So the strong kill each other and die. Whether they're dinosaurs or gladiators, the "huge brutes" circle each other in "dumb distress." They stab and punch, kick and slash, until nothing is left but blood and guts.

No wonder the meek shall inherit the earth. They're the only ones smart enough to avoid this stupidity. While the "strong" see life as a battle, and therefore fight to the end, the meek duck and weave, play the angles, shift the paradigm. They find a way to avoid pointless battles, which they'll lose, and skip straight to the winner's circle.

Natives knew it first
This is also the philosophy of indigenous cultures. Raised as part of nature, they realized humans couldn't defeat forces like the sun, wind, and rain. They kept their place, remained humble, in the face of all-powerful nature.

But knowing their limitations didn't mean accepting misery or defeat. No, they used the abilities at hand to mediate with the great forces. They prayed to, pleaded with, and cajoled the spirits of nature.

If necessary, they acted against the spirits—but with stealth, not strength. Like the trickster of legend, they outsmarted the powers-that-be. The Promethean myth of stealing light or fire by cunning, rather than taking it by force, is the classic indigenous paradigm.

Other non-Western cultures also seem to understand this mindset. In contrast to European cultures, Asian cultures seek a balance between forces—yin and yang—not domination. The whole idea of Zen, of martial arts (using an opponent's strength against him), is fundamentally non-Western.

Conclusion
Because they have no choice, the meek must be inventive to survive. America and other Western cultures may be strong, but strength is useless when you're mired in quicksand. The trick is to avoid sand traps in the first place.

After the "war song" is over
"People try hard to avoid the subject altogether, as if they are ashamed of having been swept up in a delusion, which of course they had."