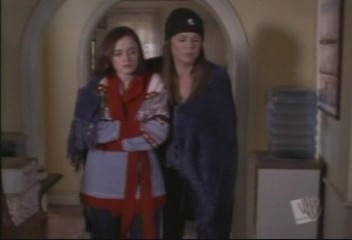 TV's Gilmore Girls live in the fictional town of Stars Hollow, Connecticut. In the 2/10 episode, Lorelai's opening diatribe tells us it's cold in town. How cold is it? Says Lorelai:

When you think about it, this is an obvious case of cultural myopia. Lorelai thinks the northern tundra is cold...but most people would say Connecticut is cold. She wonders why the Eskimos (Inuit) live somewhere cold? Well, why does she live somewhere cold? Why doesn't she move to sunny California rather than freezing her buns off half the year? (And boiling to death the other half of the year.)

More myopia: Between their airtight ice houses (igloos) and fur-lined parkas, the traditional Inuit generally didn't go cold. Just like all people do, they used human ingenuity to adapt to their environment. Moreover, they didn't "have" to eat fish. They presumably chose to eat fish because they found it tasty and nutritious.

Actually, a viewing of The Fast Runner reveals that the Inuit eat seals, birds, and hares more than fish. Which only makes sense: You don't expect schools of fish to swarm through half-frozen water.

Also, it isn't "always cold" in Alaska and Canada. Summer temperatures can reach the 70s, 80s, even the 90s. As explained in the online Alaska Science Forum:

Again, this is evident in The Fast Runner. Several scenes take place on the snowless tundra, and people remove their clothing without freezing instantaneously.

Finally, and needless to say, penguins don't live in the north. That's another stereotype, but it fits the Lorelai character, who is supposedly naive about Eskimos. The question is whether the show's writers know any better about Inuit life. From Lorelai's superior tone of voice, I'm guessing not.

Her presumption, and apparently the writers', is that Eskimos live among the snow and ice, close to the North Pole. There's no recognition that the tundra extends south of the Arctic Circle. No recognition that Alaska's Inuit typically live in villages, not isolated igloos, which are incorporated under federal law. No recognition that Canada's Inuit have their own province, Nunavut, complete with a Western-style government.

Today's Inuit live in heated homes, eat frosted flakes for breakfast, and go to work at the oil refinery (or wherever). But their lives aren't necessarily healthier than they were before. So what are they thinking when they stay put? Perhaps that they love their land and culture and wouldn't think of giving them up for mere warmth or comfort. That they've lost as much as they've gained by accepting the perks of "civilization."

Meanwhile, they're probably wondering what Lorelai is doing in the sterile environs of Stars Hollow, divorced from contact with nature, freezing in a supposedly modern home. They're probably thinking how lost and helpless she seems. Whenver a fixture or appliance breaks, for instance, she has to beg her friend Luke for assistance. She couldn't survive one day in the real world.