Even more than Indians, the Eskimo (or Inuit) seem to be America's symbol for primitiveness. The prevailing myth is that they lived (live?) in ice houses, hunted seals, and had "loose" sexual practices. Need a handy metaphor for people so backward they have no knowledge of wood or metal—much less modern technology? Use the Eskimo.

The reality of Inuit life today—like the reality of all indigenous lives today—is much different. But the Inuit are more-or-less permanently stereotyped as living in the distant and primitive past.

For more discussion of this issue, see the contest entries below. 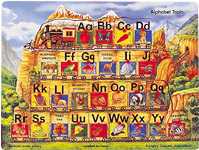