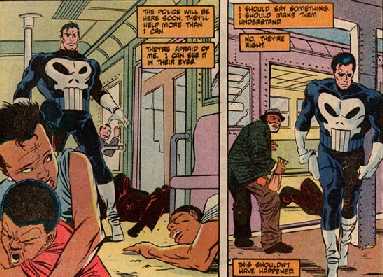 >> The title has ALWAYS been about violence and revenge. Didn't you know this going in? <<

>> If so and the subject matter had the potential to offend you, why did you bother? <<

1) Because we have a responsibility to look out for society's best interests, not just our own. 2) Because I knew it would either a) be good or b) give me something good to write about. <g>

No, I thought it would be similar to past PUNISHER comics, in which Castle didn't kill so effortlessly, ruthlessly, or mindlessly. I thought it might have some saving grace such as wit or intelligence, characterization or plot. In short, I thought Ennis might bring the same skills to PUNISHER that he employs on PREACHER.

>> It seems as if you're upset by the possibility of impressionable young minds reading this title, and that's understandable. <<

Yes, but that's hardly all of it. I think many teens and adults are as impressionable as children.

I'm not aiming to censor PUNISHER or other comics. PUNISHER is one violent influence of many. It's a drop in the bucket, really, and canceling it or shelving it out of reach would make little difference.

What I'm doing is using it as an example of the violence pervasive in our culture. I'm denouncing that violence, and the casual acceptance of it, more than I am THE PUNISHER. That's why I didn't spend much time critiquing the actual comic.

>> if my son were to bring home a comic book with this level of violence (or a Playboy for that matter), I would take the time to discuss it with him. <<

That's one potential problem down, 100 million to go.

>> I'm a firm believer that everyone needs an outlet for their violent urges. <<

I wouldn't be surprised if the idea that people have "violent urges" is a myth perpetuated to justify our culture's violence. But I'd look for psychological evidence on the point before debating it further.

I say he's completely wrong. I made my case that there's no such thing as "pure entertainment." You'd have to prove that a piece of work like PUNISHER influences nothing but the pleasure centers in every reader. Good luck with that.

>> while asserting it is a potential impetus for real-life violence, yet you're not addressing the real problem: parental apathy. <<

I didn't address it at length because I didn't have room, but I mentioned it. But if you admit parents can influence children, why stop there? Surely you'll admit peer pressure influences them, right? That's very well-documented. As is the influence of every kind of advertising from billboards to commercials.

Yet violence has no influence? How do you figure that? You're the one who hasn't addressed the key question here. Feel free to tackle it.

While you're at it, you might want to tackle the fact that, despite the publicity given to young shooters, adults have done most of the recent killings. Disgruntled white supremacists, day-traders, lonely-hearts—the whole concept of "going postal" applies to adults. Were their parents bad, too? How many generations of parents do you want to blame?

And if you could reform all these generations of parents, how would you do so? Urge them to be firmer? To "punish" their children more? Perhaps apply a good spanking now and then?

If so, you're flying in the face of volumes of research on corporal punishment's effects. If you don't believe me, go to Project NoSpank and check it out. Violence begets violence, to sum it up.

I'm educating the parents as well as the children who may read my review. <g>

>> the folks of Kliebold and/or Harris who somehow weren't aware of the arsenal and pipe bomb factory in their own house. <<

Lots of parents aren't aware of what their children think or do. That's so common we can practically call it the norm. If you don't believe me, talk to people who have tried to commit suicide, or their friends and parents. You'll find out just how unfathomable a person can be.

>> it amounts to one of one trillion and three reasons, by my scientific reckoning. <<

Exactly. Which is why I didn't say we should do anything specific about THE PUNISHER. Rather, I used it to sensitize people to how works **like** THE PUNISHER are desensitizing them.

>> You're not going to stem the tide, unless you're pro-censorship and holding office, so you should focus on damage control and awareness. <<

"Awareness" would be a good one-word summation of my goals. See the fourth of the responses I posted for an example.

>> This is your weakest point. I have yet to hear about a kid snapping and going for a semi-automatic after reading anything J. Scott Campbell or Joe Maduiera did <<

No, it's one of my strongest points. You just don't understand it. See my other responses on the subject for more.

>> No, I'm not denying that violent content in various artistic mediums can have a contributing effect to society's ills <<

>> we're back to the responsible parent argument. <<

You're back to it, not me. So answer it. Why have parents become irresponsible in the last few decades? What external forces have influenced them?

More important, if you're correct, what do you propose to do about their lack of parenting skills? If they didn't know how to feed their children, would we let them keep trying until their children died? No, we'd intervene—by educating them, at least.

So what's your solution here? Do you have one? I say we find a way to make parents responsible...or we reduce the media violence that parents can't handle...or both. I don't have a problem pursuing both factors simultaneously. Do you?

>> Let's stick with the facts, here. You did some research for your review. Do some more. <<

Not necessary. I've never claimed media violence causes real violence directly. Nor has anyone that I know of. What it causes is the continuing desensitization of the public toward violent and aggressive behavior. As psychologists have proved convincingly.

No. Not unless I want to prove a direct cause-and-effect relationship, which I don't.

>> I find it extraordinarily hard to believe you apparently like their work on PREACHER. <<

I find it extraordinarily hard to believe anyone could like PREACHER and PUNISHER equally.

>> The same macabre humor and violence can be found in both. <<

A perfect example would be Jesus DeSade and his pornographic lifestyle from early on (the second PREACHER trade paperback). Custer "punished" several people at DeSade's party, including DeSade. But despite the fact that DeSade was distributing drugs and forcing a minor to act in a pornographic film, Custer didn't kill him. That's the difference between him and Ennis's Punisher right there.

PREACHER is often over the top, and I doubt I'd give it to impressionable kids, but I think it's okay for more mature audiences. Why? Because Custer, like Wolverine, follows a moral code, however imperfectly. Because people—including the good guys—suffer the consequences of their violent acts.

That's the essential difference between these heroes and an amoral anti-hero like Punisher. Unlike them, the Punisher is a cartoon killing machine. What does he do after killing everyone in sight—smoke a cigarette?

Seriously, what about the businessmen and accountants who launder the drug money? The banks and stockbrokers who invest it? The wives and children and maids and gardeners who spend it? Does Punisher mow them all down in a hail of bullets? Why not? Aren't they all somewhat guilty of profiting from crime? Where and how does Punisher draw the line?

What do you think Castle's position would be on the 6-year-old who shot his classmate in Michigan? Bang, bang, you're dead? Would you find a comic about that situation entertaining?

Because if Ennis is unwilling to address the issue, I'm not. I say Castle goes gunning for the kid...or the uncle or whoever raised him...or his absent parents...or the social workers who "failed" to save him. Because they're all responsible, along with the media.

Frank is on the slippery slope toward gunning down jaywalkers. He went there once because that was the inevitable outcome of his brand of "logic." If Ennis writes him consistently, he'll wind up there again.

>> Too bad you probably won't be around for the rest of the series. <<

True. Once is enough for me to write a screed. I heard #2 features a good cop out to corral the Punisher. That would be a step in the right direction—toward humanizing the series—since it can't get any worse.

Anyway, thanks for the most thoughtful of the critiques I received.

More on blaming parents
Why parents aren't fully responsible for how their kids turn out.
"Even Howard Stern would have totally approved."
The "responsibility lies with the parents of this nation."
Are Grossman's conclusions based on his own testimony?
Are PUNISHER buyers "fools" who wasted their money?