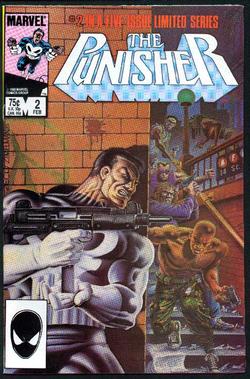 Another response to my PUNISHER #1 review, based on the following news report. From the LA Times, 6/23/00:

Bad parents, right? Which means bad grandparents, bad great-grandparents, and so forth? That is your theory, isn't it?

>> Other than those involved were apparently raised to be assholes... <<

Too much freedom? With all the laws and regulations (car seats, vaccinations, etc.), children have never been more protected or less free. Too much greed and selfishness (the Reagan years, the stock market boom, etc.)? Now we're getting somewhere.

Of course, this returns us to the media and its influence. The rioters broke the rules...just like rap stars break the rules (or talk about breaking them). Just like Howard Stern, Oliver North, and the Punisher break the rules. And whose fault is that? The rappers' parents? The Punisher's parents? Garth Ennis's parents?

While you're pondering that, ponder this. In today's society, breaking the rules is cool. Hence the popularity of body piercing and tattooing...and teen-age smoking...and pro wrestling. Hence people—OJ, Clinton, tobacco companies, computer hackers, sports stars—who do bad things and simply shrug when they're caught.

(Did OJ have bad parents? Clinton? Tobacco executives who lied to Congress about tobacco's addictiveness? They were all raised in the 1950s, supposedly a golden era of normalcy, or before. What about Lee Harvey Oswald? Julius and Ethel Rosenberg? Richard Nixon? Joe McCarthy? Hitler? How far back do you want to go with this parenting theory?)

Even Dr. Joyce Brothers has a more complex theory than that. See what she said about violence in America.

More on blaming parents
Why parents aren't fully responsible for how their kids turn out.
The "responsibility lies with the parents of this nation."
Are Grossman's conclusions based on his own testimony?
"You're not addressing the real problem: parental apathy."
Are PUNISHER buyers "fools" who wasted their money?