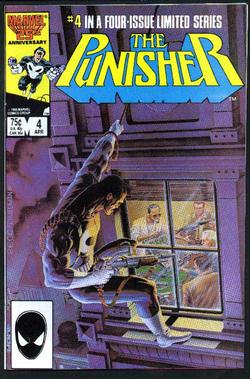 >> I disagree with everything you say but I still think you're doing good work. <<

Everything?! I have the equivalent of a book on my website. Surely you can find one sentence, one phrase, you agree with.

>> Good luck in your struggle against the all-powerful Gunman. You'll need it. <<

I'm sure I'll need it for all my struggles against racism, violence, stereotyping, and other societal problems.

>> I'll just say this: if vengeance is for gods exclusively, then you shouldn't have so many problems with the Punisher. He is a god after all. <<

Are you referring to his brief work as an agent of God? He no longer serves any master but his own.

Archetypes aren't gods, and Frank Castle is all-too-human at the moment.

>> I really wish you, and a legion of "critics" of your kind would bother to read the stories to the end before reviewing them. <<

People have reviewed comics based on one or two issues since comics began. Which isn't surprising since most comics are continued series. Reviewing a comic based on the first issue or two is extremely common. Waiting for the series to end isn't.

>> Garth Ennis DOESN'T have to make any agenda of his writing clear in the very first issue. He doesn't even have to have any agenda at all. <<

>> In case you missed the last four centuries of literature development, the times of morality plays are gone. <<

In case you missed them, most literary works have conflicts and resolutions. Watching the Punisher murder 20 or 30 people without serious opposition, without even raising a sweat, isn't what I'd call "conflict." The first three issues did nothing to create the sense of a growing conflict, which is one hallmark of literature.

I'm not seeking a morality play different from that in any honest work, which discusses the truth and consequences of actions like Castle's. If you think there's nothing between a traditional "morality play" and an amoral glorification of violence, you're sadly mistaken.

>> If Ennis wants to say something in his work, he can do it on the very last page. Comics really don't have to look the way you want them to. <<

You seem to be under the misapprehension that my review was supposed to reflect Ennis's opinions, not my own. Let me assure you otherwise.

>> You still haven't replied to my mails, Rob. I'm getting offended. <<

I have about 900 messages in my inbox waiting for me to deal. I've debated the PUNISHER comics many times before and am tired of hearing the same old arguments. But I'll get to yours and everyone else's messages eventually. That means a couple of weeks, maybe.

>> I really don't know where you got the pernicious idea that pre-Ennis Punisher was any better. <<

From reading almost all his appearances before his own series began. For instace, did you read the Zeck-drawn mini-series, which was Punny's first solo outing? I referred to it on my site at http://www.bluecorncomics.com/punish8.htm. Tell me which issue of Ennis's PUNISHER expressed sentiments like the ones quoted there.

>> Ennis' version is a great improvement. It's sexy and funny. <<

>> If you want to know what one can learn from such a violent story, just email me back. I want to talk about violence. Specifically, about killing. About what makes the murdering vigilante so popular. <<

I already have a good idea. Namely, because the murdering vigilante fits the American archetype. See America's Cultural Mindset for more.

But go ahead and talk. Here's a study question for you: What's the difference between Hitler, the Punisher, and Tim McVeigh, if anything? Aren't they all all mass murderers who took the law into their own hands?

>> Ther will be an ongoing Punisher series by Ennis. Frank will meet Spiderman. <<

I hope Ennis learns to write better by then. And I hope Spidey puts Frank on Death Row where he belongs.