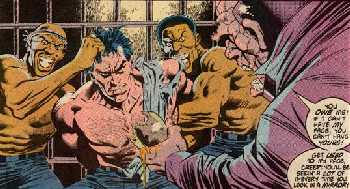 >> First off, I would like to apologize for the deplorable behavior, grammar, spelling, etc. exhibited in this attack on you. However, I also would like you to retract the statement that these two are indicative of the typical Punisher fan. <<

Alas, I need more evidence than just your say-so. Maybe Justin/John is the typical Punisher fan and maybe you are. Who really knows?

>> It's every action movie slammed together with the plot thread quietly winding them up. <<

Most action movies also send a deplorable message—whether they realize it or not, whether their producers acknowledge it or not.

>> There is, but unlike most comic stories, it wasn't revealed in the first five panels. <<

Unlike most comic stories, it wasn't revealed in the first issue. Luckily for Marvel, a whole bunch of fans apparently have money to burn.

>> Ennis is drawing us in to the world of the Punisher so as to be able to spring the plot twists on fast and furiouly,s as he does with great skill in 'Preacher' <<

PREACHER had an obvious plot and characterization from almost the first page. Ennis's take on the Punisher isn't much like his take on PREACHER.

>> You must remember, he never "punishes" any who do not truly deserve it. <<

I assume you mean the Punisher, not Ennis. The Punisher used to kill, but he never gloried in it. He never tossed in a grenade to blow up an already dead man, or threw a helpless man off the roof. These acts are sadism, not vigilante justice.

>> Although I enjoy action movies (Die Hard, the Matrix, etc.) I have never engaged in a single act of agression against another living creature <<

Never swatted a fly? Never got in a loud argument with someone? How do you define aggression, exactly?

Why? Because they've been exposed to some 200,000 acts of violence on TV by the time they grow up, among other reasons.

>> I just know that if I and all my friends can sit through hours of TV and movie murders and come out unchanged ("oh, but you aren't," you say. I say I am, and who should know) then most anyone could. <<

So TV had absolutely no effect on you? You didn't learn how to laugh with Lucy, to sympathize with the MASH doctors, to be a hero like Captain Kirk (excuse me, Picard, since you're young)? Because all those are examples of TV's influence.

I was one of those classic kids watching TV six hours a day when I grew up. And I say it changed me and everyone I knew who watched TV. We all emulated our heroes, whether it was John Wayne, James Bond, Superman, Sgt. Joe Friday, Mike Nelson (Sea Hunt), the Cartwrights, Batman, James West (The Wild, Wild West), Steve McGarrett (Hawaii Five-0), Captain Kirk, Mannix, Kojak, the Mission: Impossible team, et al. That meant being more noble and heroic and also more macho and aggressive.

>> The flickering light on the screen may have caused it to sprout, but I can pretty much gaurantee you that it would have sprouted sooner or later. <<

If TV, movies, and comics make "it" sprout sooner than it would've normally, these mediums are a problem.

>> In conclusion, I would like to thank you for your time and patience. <<

The debate deteriorates...
>> It is obvious from your reply that you do not wish a to engage in a discussion of your ideas <<

Is it? What's obvious to you isn't obvious to me. Since you're the one who didn't answer my arguments and is dropping out, you seem to be the one who doesn't wish to discuss things. So noted.

>> If I am in error and you do indeed wish to engage in a rational discussion on this or other issues, please disabuse me of this notion. <<

I did engage you in a rational discussion. If you can't answer my questions, just say so and spare me the rationalizations. I've debated thousands of people and I only chuckle when they make up excuses for giving up.

>> I would characterize it as the act of physically, emotionally, or mentally harming or abusing another person. <<

And you've never done that? According to the other person's belief, not yours? I find your statement that I haven't engaged in rational discussion "aggressive." So you've acted aggressively in this limited conversation by your own limited definition.

>> Yes I have swatted a fly, but I have never harmed another creature. Your facetiousness is not amusing. <<

You must be a vegetarian, since eating animals definitely harms them. But the fly alone is enough to prove you've acted aggressively. The point I've made is completely valid. We all like to think of ourselves as "unaggressive," yet we act aggressively in countless subtle ways.

If you think the argument is facetious, that shows your limited understanding of my argument. A quote from Religions of the World on the Jainism religion may help make the point:

Do you do those things also? If not, then you're more aggressive than a Jain. Why? Perhaps because you've been raised in a Western environment where TV violence, PUNISHER comics, and killing animals are okay.

Now that I've explained why my argument isn't facetious, do you have a rebuttal? Or do you concede the point? As I said, spare me the rationalizations for your inability to answer.

When someone comes up with a justification for violence that I can't disprove or dispute, it'll be a red-letter day. I'll let you know when it happens. It hasn't yet.

The debate grinds on...
>> Once again you have proved my point. I am not debating whether or not violence in the media has an affect on people. <<

You could've fooled me. Among other things, in your first message you wrote:

I debated the points you raised...no more and no less.

>> For the last time, my argument was that "Justin" and "John" are not typical punisher fans. <<

That may have been part of your argument. It wasn't your whole argument, as I showed by the quotes above.

It was my impression based on 35+ years of observing the world in general and comic book fans in particular. What do you base your conclusion that they're not typical fans on?

>> then I would like what I wanted before, an apology for associating me and other fans like me with these two. <<

If you can prove they're not typical fans, I'll consider it. Good luck.

Not really. A small range of people can be typical of a larger group. Unless I say "this person is the typical fan," "this person epitomizes PUNISHER fans," or something equally precise, the point is imprecise.

I hope you haven't been holding your breath. I'm waiting for your apology that my arguments were facetious and not rational. Just the opposite is true. More important, they addressed the points you raised, though you apparently didn't realize it.

I think we can safely assume Punisher fans are similar to Wolverine fans. It appears I've judged the "bloodthirsty" attitude of many fans exactly. You may e-mail your apologies to me at this address.