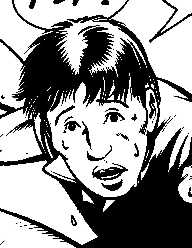 Sorry I had to trim your review, l'il buddy. As you may have heard, brevity is the soul of wit. You may want to try it sometime.

Besides, I needed more space for my response. <g>

Thanks for the "props," the "mad credit," and so forth. I'd say "I told you so," but why belabor the obvious? Let's see if I can address your comments without killing too many more trees.

As a self-publisher, I can't afford the "eye-popping" art of the fanboy favorites. I doubt I'd hire them if I could. I think the Fattoruso/Kelleher team did a fine job on #1, and the Dupras/Heike/Janowsky team may be even better. Both teams served the story, which is what I wanted.

You misunderstand if you think issue #1 is the quintessential PEACE PARTY story. The origin imposed certain unavoidable requirements on the narrative (e.g., gunplay and car chases). There are only so many ways to make a mountaintop scene interesting.

Eventually we'll cover the whole range of human experience—from mystery and drama to adventure and fun. Though we'll never feature the pointless sex and violence you deem necessary, we'll have goodly portions of "mainstream" heroics, with mutants, time travel, and the supernatural. This very issue features our first conniving supervillain and first horrific monster. The buildup to our first battle royale may be too slow for you, but we'll get there someday.

I've told you my audience before, but it bears repeating. The target market is young adults and adults—the older half of the market, roughly speaking. The older these readers get, the more they appreciate character. I'm trying to give them what they want.

For every writing "extreme" that's failed, I could name five or ten fanboy "extremes" that have failed. Movies based on fanboy premises (PUNISHER, SPAWN, BARB WIRE) routinely bomb. Entire companies based on fanboy fulfillment have gone belly up.

Meanwhile, character-based comics are selling in today's market. This is a basic concept of Marketing 101. "Instead of going after a small share of a large market," writes Philip Kotler in Marketing Management, "[a] firm goes after a large share of one or a few submarkets….If the segment of the market is well chosen, the firm can earn high rates of return on its investment."

Let's go through our litany of examples again. Unlike the earlier Epic line, the Vertigo books have survived for a decade with their clear emphasis on writing. SANDMAN completed its award-winning run without noticeable sex or violence. It's now in reprints and has spun off several series. WATCHMEN and DARK KNIGHT had little sex and only the usual urban violence, none of it gratuitous. Independent bestsellers like CEREBUS and BONE continue to hold their own. Alan Moore's intelligent ABC line is selling like hotcakes. So are the mature Marvel Knights titles, where the popular INHUMANS maxi-series was almost pure characterization.

Heck, even sanitized fare like SUPERMAN and BATMAN ADVENTURES and ARCHIE continue to flourish. How do you account for ARCHIE's decades of success if fanboys rule, Khan? Simply put, the market is more diversified than you seem to realize. That the only path you see is pandering to fanboys shows your woeful lack of imagination.

In short, I'm trying to occupy the center, not an extreme—the same center occupied by X-MEN in comics, The Simpsons on TV, and The Blair Witch Project on the big screen. These all became mainstream hits by taking an innovative approach—by combining new and old elements into something unique. I hope to do the same.

I'll be overjoyed if PEACE PARTY achieves the stature of SANDMAN, WATCHMEN, DARK KNIGHT, MARVELS, or Miller's DAREDEVIL—industry landmarks people will remember 100 years from now. I'll settle for the rewards of doing a Native American version of the Claremont/Byrne X-MEN or the Wolfman/Perez TITANS. These are the books I'm aiming at, and their readership is my readership. They've proved that sophisticated comics for a smart audience can succeed.