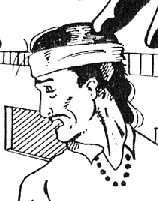 From author and professor Russell Banks's essay on the American novel (LA Times, 7/2/00):

I take it as a given that our best and most ambitious fiction writers are those whose sense of purpose is guided by a desire to participate in the making of a national literature. My hope is that this ongoing, 200-year-old project will provide us a truly democratic literature, one that has at its center the historical and moral facts of creolization and that therefore both honors our people's highest standards for our treatment of one another and does not in the process lie about our tragic failure to meet those standards.

Not only can literature explore sociopolitical and sociocultural themes, it should and must if it aspires to be great. The best of American literature does precisely that, dealing with the central themes of race and violence. Works like Huckleberry Finn and To Kill a Mockingbird show us what it means to be American.

That explains why rap and hip-hop have come to define today's generation: because they tell it like it is. It's a good reason for doing any kind of multicultural art, be it music, movies, or multimedia. It also justifies doing minority-themed comics.

And let's see...out of all the comics on the marketplace, which ones focus on the key issues of the American experience? Which ones offer a clear alternative to the Anglo-based, violence-steeped comics of today? There aren't many, but PEACE PARTY is one.

As America struggles to define itself, as the culture wars continue to rage, multicultural storytelling stands on the leading edge. Far from being propaganda, as some critics assert, PEACE PARTY tackles exactly the themes that make great American literature. It may never achieve greatness, but it aims as high as anything.