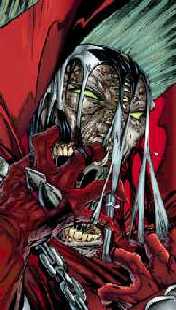 A continuation of my Indian Comics Irregular essay Why Spawn Isn't Black:

More on racial characteristics
For Millions of Latinos, Race Is a Flexible Concept

I'd say the Mummy, Frankenstein's Monster, Man-Thing, Ghost Rider (the skeleton, not his human host), and Casper the Friendly Ghost don't belong to any particular race. I'd put Spawn in the same category as them. No original skin, no race.

Anyone who disagrees (Gnat, are you there?), please tell us which race the above five characters are. Or admit you can't. Good luck.

Readers respond
"Hello. I'll bite (a little) on the [Mummy/Frankenstein's Monster/Casper] challenge."
"[W]ould be ok to paint pervasive religious figures like Jesus...with blonde hair and blue eyes?"
"[H]ow is one classified as 15/16ths white or black by 'blood'?"
"The perception of the reader/audience/other characters is that he's African-American."
"I can't back away from a challenge!!"