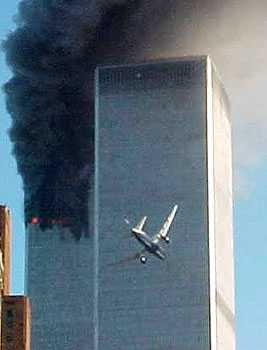 Rob's reply
I submitted the following column to the LA Times to rebut Morgenthal's screed. Unaccountably, the Times didn't print it.

In the wake of the 9/11 holocaust, movie and TV producers postponed or eliminated shows with ultra-violent plot lines. Video-game developers curtailed references to bombs, hijackings, and terrorism. Radio stations banned songs that might remind Americans of the nightmarish horrors they had seen.

Shocked into action by the cataclysmic events, media moguls finally ended the pretense and admitted what we've known all along: that media violence affects real life. When push came to shove, they dropped the denial and did the right thing. They altered the products that might hurt people's feelings or give criminals ideas.

Finally, everyone in Hollywood seemed to be on the same page. Everyone, that is, except David Morgenthal.

In "Time to Rethink This Media Theory?" (Oct. 1), Morgenthal wasted little time scoring political points off American deaths. He wondered where the "anti-violence talking heads" were and challenged them to answer his riddle. Simply put, if the Afghan terrorists had no media, hence no media violence, why did they kill so many?

As an occasional anti-violence advocate myself, I've been right here, following the news like everyone else. I'm happy to answer Morgenthal's charge and expose the gaping holes in his argument.

First, media conditions in Afghanistan are irrelevant to Morgenthal's case. By all reports, the terrorists were educated, cosmopolitan travelers. Undoubtedly they got their newsóand their exposure to violenceófrom the same worldwide sources as everyone else: CNN, BBC, MSNBC, etc.

Moreover, the terrorists spent the last several years in Germany and the United States, not in Afghanistan. They spoke English and blended in easily with their neighbors. At least one enjoyed video games and strip joints, suggesting his familiarity with our communal sex and violence. There's no reason to think the terrorists weren't immersed in the same media influences as our homegrown, McVeigh-style murderers.

Second, the atrocity happened on American soil. If the FBI or whoever is keeping stats correctly, the deaths should accrue to the US murder toll. The terrorists didn't jack up Afghanistan's crime rate, they jacked up ours. Their onslaught proved the time-tested rule: that America is the deadliest place on earth.

Does Morgenthal think the 3,000 fallen should count against Afghanistan's murder toll even though they happened here? Okay, let's go with that "logic." By the same logic, the hundreds of thousands we've killed over the last decadeóin Iraq, Kosovo, Somalia, and Sudanóshould count against the US murder toll. So who's killed more: the terrorists who supposedly weren't influenced by the media, or the US pilots and bombers who were?

Third, consider one media influence Morgenthal may have missed. We've heard how Al Qaeda's training camps have indoctrinated their students in a rabid version of Islam and a rabid hatred of America. Whether Osama bin Laden exhorted his followers from a recording or preached the gospel in person, what is that but a media influence?

So what if the Koran is 1,400 years old? It's still a form of media. Just as our fundamentalist preachers have used the Christian media to inspire hate against gays, abortion seekers, and other "sinners," Afghanistan's fundamentalist preachers have used their media. Whether it's the Bible or the Koran, in person or on TV, external messages have warped internal thoughts and feelings.

Morgenthal must not read his Los Angeles Times, because the Times paraphrased cultural critic Neal Gabler on the terrorists' obvious media borrowings: "Just as pop culture may provide a matrix that can help survivors cope, [Gabler] added, it also seemed to offer a blueprint for the terrorists. The precise choreography of the attacks suggested the planners were consciously using movie-like images to terrorize the public."

Proving how the media shapes everyone's thinking, President Bush responded in kind. Like a televangelist, he promised an old-time crusade. Like a cowboy hero, he promised to take Bin Laden "dead or alive." Like a comic-book character, he promised to rid the world of evil.

Morgenthal has argued the terrorists were devoid of media influences. I'd argue just the opposite: that in today's global village, the world is drenched in American media influences. The question isn't why the terrorists attacked the World Trade Center as in a Schwarzenegger action flick. The question is how the rest of the planet avoids grabbing a gun and acting out its favorite movie/TV show/rap song/video game.

The evidence:  Terrorists know American media
From "First, Know the Enemy, Then Act," an article about Al Qaeda by Dale F. Eickelman. In the LA Times, 12/9/01:

Comment:  So a "dirty, illiterate moron" (to quote one correspondent) is familiar with a 20-year-old US movie? So much for Morgenthal's assertion that Afghanistan is devoid of media influences.

More on terrorism's connection to media violence
From "A Horrifying Feeling of Deja Vu" in the LA Times, 9/12/01, a quote from Neil Gabler:

Readers respond
"Whether or not the use of airplanes was prompted by disaster movies, they seem to have wanted to create large-scale loss of life."
"Were we obligated to undertake a major diplomatic initiative post Pearl Harbor?"
Reisman:  Liberal "anti-hero, anti-God, anti-American terrorist campaign" is "driving virtue out of American life."
"Do you think the parties responsible for 9/11 did it because they watched too many disaster movies?"