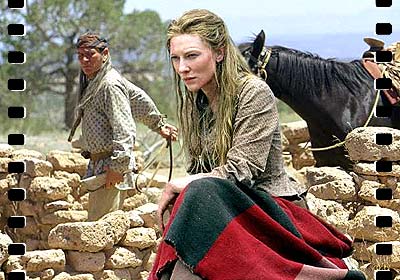 Ron Howard's new western presents an Indian villain straight out of the pages of pulp fiction. Eric Schweig's character, known as Pesh-Chidin, is one of the nastiest Natives ever to appear on-screen. You have to go back to Magua in The Last of the Mohicans (published in 1826) or Injun Joe in Tom Sawyer (published in 1876) to find Indians of comparable evil.

The Missing = The Searchers?
Lacey puts The Missing in historical context:

As did many critics, Elvis Mitchell also compares The Missing to The Searchers in his review. From the NY Times, 11/26/03: 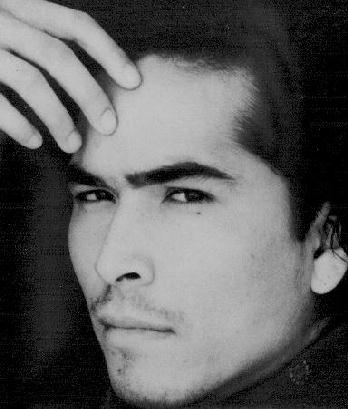 The wicked witch of the West
Kenneth Turan provides a more-or-less neutral overview of Pesh-Chidin, the Apache brujo (witch), in his review. From the LA Times, 11/26/03:

More pointedly, Lacey tells some of The Missing's problems in depicting Natives:

Another witchcraft-voodoo-kidnapper <sigh>
Another review explores the stereotyping further. From the Native Times, 11/27/03:

If I read the reviews right, the good Indians are Bible-quoting Christians while the evil ones practice a corrupt, probably false version of Apache religion. If true, The Missing furthers the commonly-held notion that Christianity is somehow loftier and nobler than Native religions, which are dark, impure, and prone to be used for immoral purposes.

The "white Indian" stereotype
Christine Olinger (aka "the movie muffin") dismisses one potential problem while raising another in her review for Reel Reviews:

The point:  Hollywood often uses white heroes in "ethnic" movies because it doesn't think ethnic heroes can carry a picture. Dances With Wolves is just one famous case. You can find examples throughout movie history: Jimmy Stewart in Broken Arrow, Tom Laughlin in Billy Jack, Val Kilmer in Thunderheart. The same applies to other exotic cultures: Tom Cruise's The Last Samurai has been called Dances With Wolves in Japan.

So Ron Howard cared enough to get the Apache language right. And he may have gotten the history (the slave-raiding) right as well. Bravo.

Apache audiences understandably appreciate seeing their people and hearing their language on-screen. That may be enough to make the movie a winner for them.

This article offers only one comment on the stereotypes noted previously: that Apaches enjoyed seeing themselves portrayed "as they were—the good and the bad." True, having a variety of types is better than having only negative types—e.g., savage, stoic, or good-for-nothing Indians. But even better is having characters who are multifaceted—who have conflicting traits, both good and bad, as real people do.

It's not clear whether The Missing achieves that level of sophistication. Most (non-Indian) critics seem to think it doesn't.

What is clear is that Eric Schweig's character is unreservedly evil. That suggests the movie is at least partly stereotypical. The best villains have a touch of humanity about them. They aren't just cardboard cutouts.

The Searchers presented good Indians, as did the seminal Broken Arrow (1951) and the Lone Ranger movies, so it's not as if that's something new. Showing good Indians is a good starting point, but these days movies should strive for more nuanced portrayals.

Racism present in The Missing?
Keith Uhlich sums up what many critics thought about The Missing's Indians in his Slant Magazine review:

I understand "voodoo" has two meanings: the specific African/Caribbean religion and a general "black, dark, or incomprehensible magic" (e.g., "voodoo economics"). It's similar to shaman, which also has two meanings: specifically, a practitioner of indigenous religion in NE Asia and America, and generally, any medicine man. But I'll try to be more precise in the future.