We speak Indian words, eat Indian foods, use Indian goods—yet we barely know anything about the first Americans. If we think of them at all, we imagine that they're "out there" somewhere in the mythical West.

Not so. Even in Tinseltown, Native American culture surrounds us and infuses our lives. The area offers many ways to learn about indigenous history, art, and philosophy. To prove it, a friend and I decided to seek out the Indian in Southern California.

To reach the Hall, we pass through a gallery of Pre-Columbian artifacts. The pieces here, especially the Mayan and Aztec statues, are complex and absorbing. Somersaulting acrobats, rulers piercing their flesh with needles, half-human, half-animal gods...Greek sculpture may have been more heroic, but these figures are more supple and lifelike. We can believe they depict beings who once walked the earth.

The Indian Hall, formally the Times Mirror Hall of Native American Cultures, is a disappointment. The winding corridor takes us past displays on California Indians (Gabrielleno, Pomo, Paiute), Southwest Indians (primarily Zuni and Navajo), and some undifferentiated Plains Indians. Other tribes receive little or no mention.

The Hall makes an admirable attempt to portray Indians as a living, vibrant people (a video, a census of Indians in Los Angeles, modern examples of tribal art forms). Paradoxically, though, it gives short shrift to the depths of their cultures. We get the impression that Pomos grind acorns, Zunis live in pueblos, Plains Indians wear costumes and ride horses, Navajos weave blankets—and not much else.

The best feature is the background tape of birds singing, women grinding, and other sounds of activity, which adds verisimilitude. But the lighting is dim and uneven in places, for no apparent reason. You shouldn't miss the upstairs mezzanine, identified by a lone sign, but this section further muddies the experience by showing more of the same.

The literature says "the hall depicts regional and cultural customs in dynamic juxtaposition that reflects actual historical conditions." If so, we didn't see it. Our advice: Stick with the Maya, or check out the dinosaurs, insect zoo, and minerals instead. (You may want to leave children with the critters in any case.) 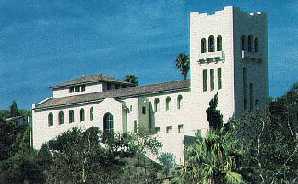 Located in a Spanish-style hacienda atop a hill, the Southwest Museum is a cool, tranquil oasis. Outdoor sculptures ranging from totem poles to abstractions put us in the right frame of mind.

A typical visiting exhibit—"Life in the Balance: The Hopi Way"—shows what a museum can do. Each panel in the gallery tells the Hopi story in a natural progression. From artwork, kachina dolls, and dances to clothing, farming, and cooking, the exhibit touches on every aspect of domestic life.

Connections are made everywhere. Kachinas are presented as artistic pieces as well as religious icons and utilitarian toys. Colorfully dressed dancers perform ceremonies full of meaning. Bridal and other garments evoke Hopi legends through their design. Baskets and pottery repeat religious motifs. Food preparation and child rearing require ritual and prayer to succeed.

Kachinas, baskets, and other symbols throughout the exhibit express the theme of interconnectedness: faith, hope, and hard work keep Hopi lives in balance.

The same care is shown in the four permanent halls. Artifacts aren't simply displayed, but are juxtaposed with photographs and dioramas to show how people used them. A Yurok/Hoopa plank house, a full-scale Cheyenne tipi, and massive Haida house posts give the exhibits a physical presence.

Past exhibits include "One House, One Voice, One Heart: Native American Education at the Santa Fe Indian School" and "Warriors: Navajo Code Talkers," both photographic essays. Classes, programs, and special guests—a Hopi silversmith was demonstrating the day we visited—give one all the more reason to come.

One could quibble with a few things—the code-talker exhibit showed mostly talking heads, the Southwest Hall lacks the attention-grabbers of the others—but these are mere details. Until we see better, the Southwest Museum is our idea of how to present native cultures. 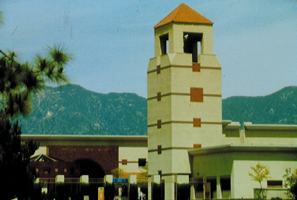 The upper floor of the attractive building is—how else can we say this?—a paean to the singing cowboy. One exhibit features the sentimental warblings of Autry, Roy Rogers, et al., while another links genuine art (Catlin, Remington) with Wild West shows and movie serials. It's as if the Hollywood troubadour was the natural product of Western evolution, rather than a silly parody of a real-life wrangler.

Where do Indians fit into this? Well, a few Anasazi pots prove someone inhabited America before it was "discovered." Romantic landscapes show Indians as noble savages (an enduring stereotype), at least until they were exploited as freaks, bogeymen, and devils. They then became faithful sidekicks and product hucksters, selling everything from butter to pears to baking powder.

When we see these relics (remember Aunt Jemima?) alongside banners of teams such as the Washington Redskins, without one critical comment, we know this museum just doesn't get it.

Tucked away on the lower floor is the "real" history of the West, untainted by show biz. Every aspect of cowboy life is on display. But once again we don't receive the full story.

Though reference is made to the original Spanish vaqueros, we don't learn that many cowboys were minorities, that women played significant roles, or that sheep and cattle men fought wars. We also don't learn that Anglos practiced genocide on the Indians or herded them into concentration camps (reservations).

Only one section, dominated by a stuffed buffalo, shows selected Plains Indian artifacts. Ironically, most have been donated by the Southwest Museum. 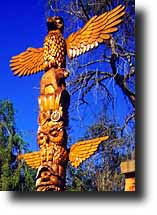 Indians Trails is a modest but sincere counterbalance to Knott's saloons and stagecoaches. Two Tsimshian totem poles and a Kwakiutl longhouse greet us. One of the poles commemorates a young chief who fed an eagle and was rewarded, while the other recalls how Raven brought light to the world.

The frequent dance performances, though, are the heart of Indian Trails. As two drummers play and chant, Indians take turns on a low, circular platform. First, two men do a social Grass Dance, their fringes rippling like stalks in the wind. Next, a lone warrior commits a Fancy War Dance, moving frenetically to the beat of the drum.

Finally, two Acoma men perform a Taos Pueblo Hoop Dance. With one ring, then three, then five, then nine, the dancers weave hoops in and out, over and under, their bodies. That they remain synchronized, with hardly a slip, is little short of amazing. At the climax, they spread fifteen or more hoops like stars across the sky, then merge them into globes and set them gently on the stage.

A couple of Indian shops (with mostly genuine crafts and foods) complete the scene. We don't see much else of Indian life at Knott's, but we don't see the West glorified beyond recognition, either. Weathered storefronts, rusty equipment, and statues of "working girls" suggest that this is the way it really was.

Much of the grounds is taken up by a dozen rows of stalls. These flaunt everything from dolls, jewelry, and dream catchers (webbed hoops designed to snare fleeting fantasies) to books, t-shirts, and bumper stickers ("Better Red Than Dead"). Visitors can refresh their supplies of bear claws or coyote pelts, or stock up on the latest crystals and herbs.

Except for occasional lapses—a teddy bear in a headdress, New Age books that co-opt Indian religions—nothing here is politically incorrect. But the emphasis is on tourist-ready goods. Traditional Indian crafts—pottery, baskets, and textiles—are scarce. Only a few humble artisans draw, whittle, or sew while we watch.

The day is perfect for a casual stroll or a picnic meal. But when the loudspeakers boom, we forget the kitsch and hurry to the arena. Taking seats in the stands, we're just in time.

The effect is dazzling. Men in feathered finery strut and peck like turkeys; women in beaded shawls shake, rattle, and roll. Young children wander in and out.

After the grand entrance come individual events. In the Jingle Dance, for instance, women festooned with bells or shells glide softly around the ring. They take tiny steps, stay firmly grounded, as if profoundly connected to the earth. We sense that these people aren't prone to wantonness or waste, that they have a deep respect for nature and reverence for life.

As we head into the sunset, we realize that's not a bad lesson for us all.

Author's note (2001)
I wrote this article in parts from 1993 to 1997. Since then, the Southwest Museum has expanded into its LACMA West facility, Knott's Berry Farm has added its Mystery Lodge, and the Autry Museum has removed its stereotypical Indian kitsch. But I'm leaving the old critiques up as a cautionary tale: that even well-meaning institutions with the expertise to know better can go wrong.

Author's note (2003)
To preserve its mission and its collection, the Southwest Museum has decided to merge with the Autry Museum. Read about it in New Beginning for a Gem of a Museum.

Author's note (2008)
The Autry National Center has announced plans to build a new museum to showcase its collections. For more on the subject, see New Autry Museum Planned.

The Autry hosts a vibrant theater scene with its Native Voices at the Autry program. For more details, see Native Plays and Other Stage Shows.